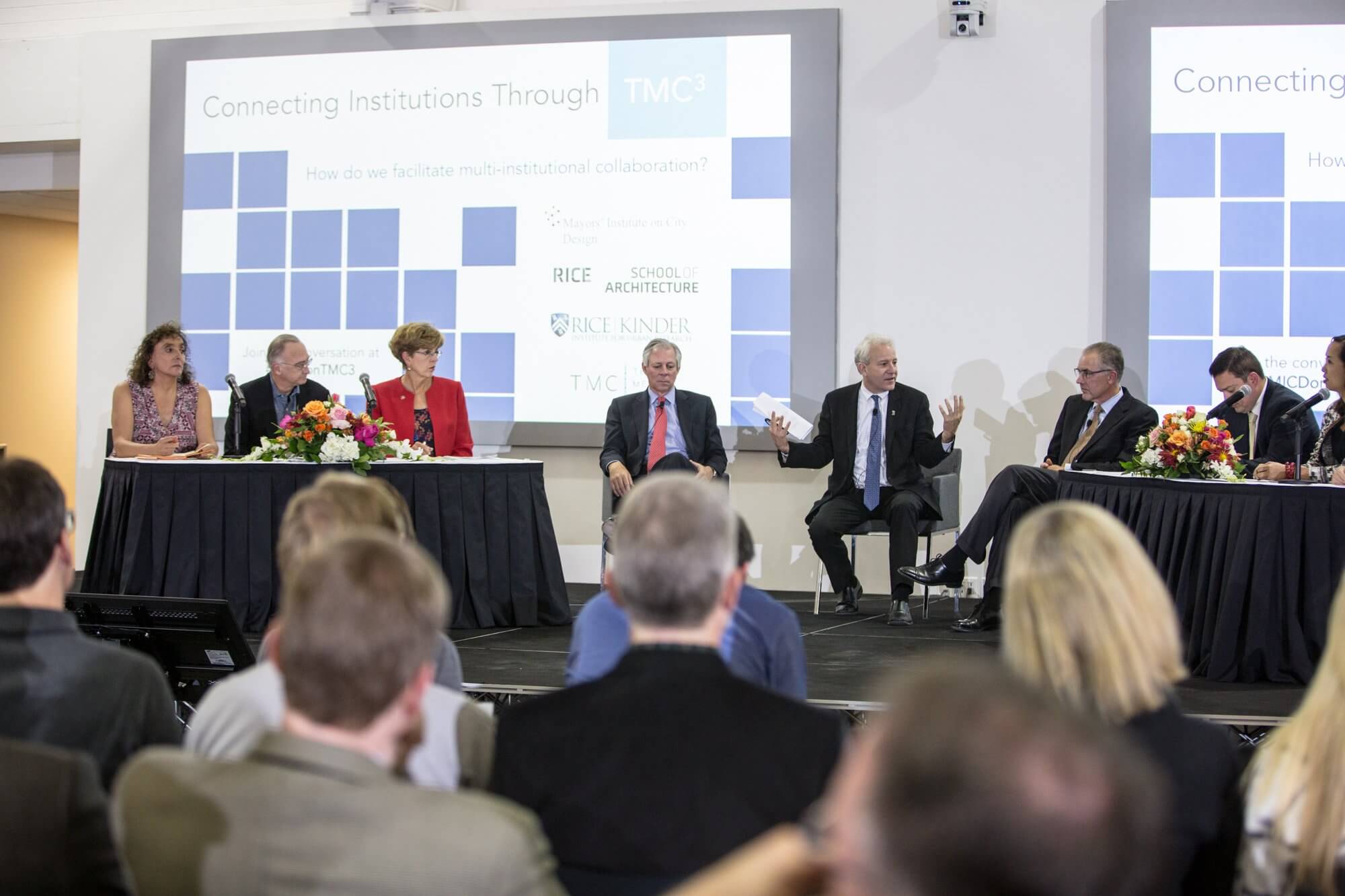 The Kinder Institute for Urban Research and the Rice School of Architecture hosted a panel discussion Thursday evening with the Mayors’ Institute on City Design to discuss the Texas Medical Center’s TMC3 development plans.

David Calkins, south central regional managing principal at Gensler, joined Robert C. Robbins, M.D., president and CEO of the Texas Medical Center, in introducing future plans for TMC3, the new Translational Research Campus designed as part of a collaborative effort among governmental and charitable organizations to establish a hub for biomedical research and commercialization in the city. Calkins and Robbins prefaced the discussion by presenting the strategic design plans for the 1.5 million square feet of shared real estate between the north and south campuses that will include a research space, five institutes, a hotel and conference center, residential housing, restaurants and a recreational park.

“We thought about putting together a translational research campus so that the institutions can do fundamental discovery but would sit side-by-side with companies — whether they drug companies, medical device companies or health companies,” Robbins said, adding that the design is focused on three key components: green space, residential housing and retail space.

Approximately 60 people attended the discussion moderated by the Kinder Institute director Bill Fulton and featuring guest panelists from the MICD’s 2015 West Regional Session: Allison Joe, deputy director of California Strategic Growth Council in Sacramento, California; Vicki Estrada, principal at Estrada Land Planning in San Diego, California; Rob Rogers, partner at Rogers Partners in New York City; Malcolm Duncan, Jr., mayor of Waco, Texas; Cathy Noon, mayor of Centennial, Colorado; and Steven Hernandez, mayor of Coachella, California. The discussion touched on a variety of topics — including opportunities for increasing walkability, recommendations on funding, and generating revenue from the common area — but the crux of the conversation focused on how the Texas Medical Center will facilitate collaboration across all of its member institutions to become better connected.

“Every [institution] comes to us and says, ‘We need the next generation of the great MRI-PET scanner and each one of us needs it,’” Robbins said. “Well, why can’t we come together and have shared facilities where we can collaborate and use those things together?”

The urban planning and city experts voiced the need to work toward establishing common goals in order to achieve that collaborative environment.

“Collaboration is so much more than convening and sitting at a table doing meetings and working through issues. It’s actually thinking about and hearing about the vision of the project,” Joe said.

“You have to find some shared values that all of you can come together on. It’s very competitive,” Hernandez added.

Noon used the example of districts in Denver to elaborate on the importance of having a shared mission.

“We have a number of special districts in Denver that cross boundaries of entities, but they have common transportation goals, common business development. […] That’s a way to try to bring everyone together, because there’s a representative from each entity,” she said. “That might be something to think about, because collaboration will get you a lot further against your competitors.”

The MICD and Kinder Institute continued its second day of urban planning sessions today with additional mayors and resource teams from across the country joining in on the lively debate and open discussions on their cities’ projects.