TMC hosts the Texas Tribune for a discussion on health care

TMC hosts the Texas Tribune for a discussion on health care 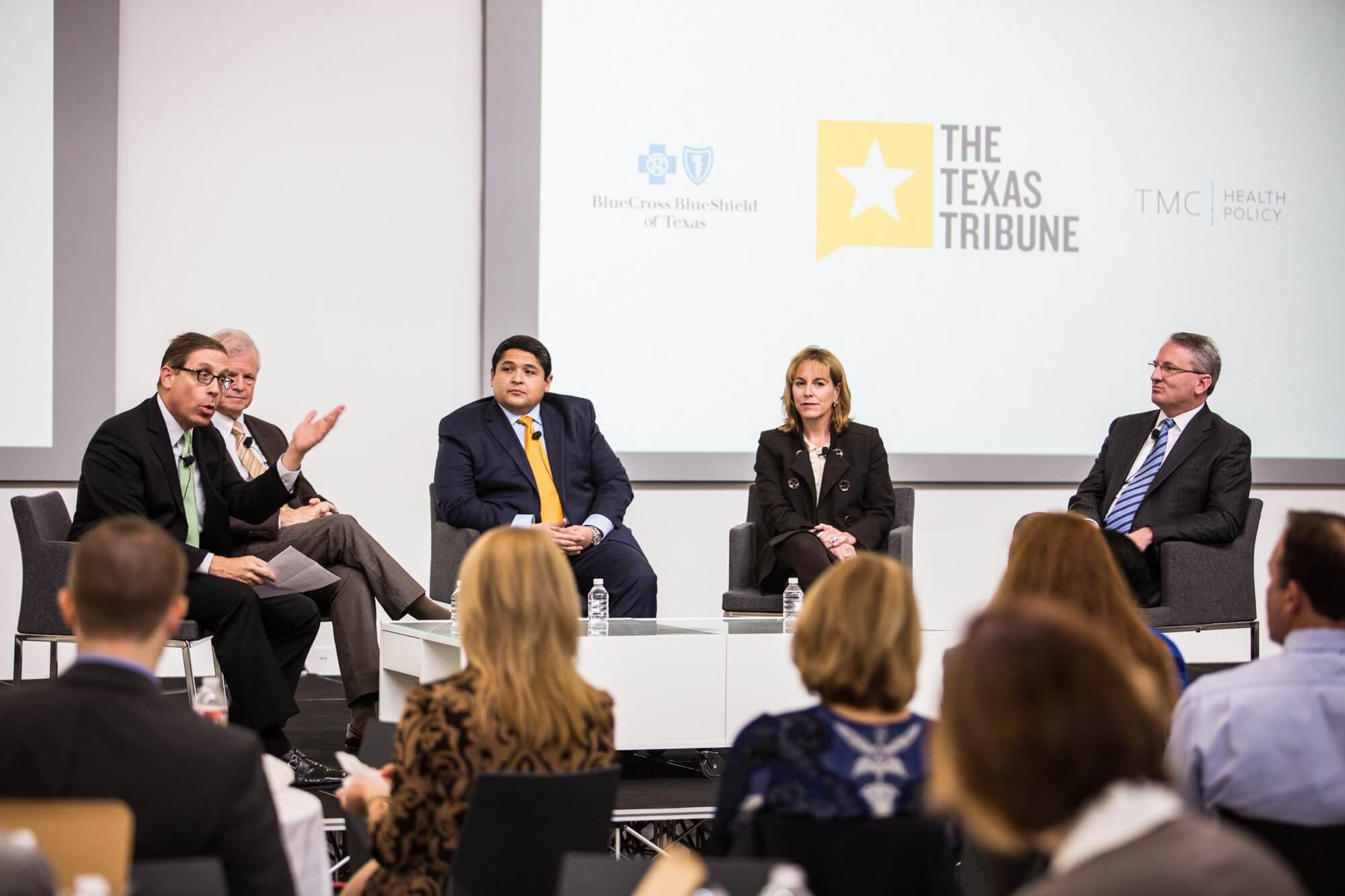 The Texas Medical Center’s Innovation Institute welcomed the Texas Tribune and health care industry leaders in a panel discussion Tuesday to talk about the changing landscape of hospitals and health care in Texas.

The speaker session served as the second installment of the Texas Tribune’s three-part conversation series.

Arthur Garson Jr., M.D., MPH, director of the Texas Medical Center Health Policy Institute, kicked off the event with a brief introduction before handing the stage over to Evan Smith, editor-in-chief and CEO of the Texas Tribune, who moderated the panel session. Smith was joined by John Warner, vice president and CEO of UT Southwestern University Hospitals; Israel Rocha, CEO of Doctors Hospital at Renaissance; Debbie Sukin, regional senior vice president of Houston Methodist and CEO of Houston Methodist The Woodlands Hospitals; and George Masi, president and CEO of the Harris Health System.

The public event brought in 145 health care professionals who attended to listen to the discussion on how new economics of health care, reform politics and technology all affect Texas health care systems.

The idea that Texas health care issues, primarily the fact that the state is no. 1 in the rate of uninsured populations, are indicative of macro issues resonated with the audience and, in particular, Smith.

“You can’t fix America without fixing Texas,” Warner said. “We’re such a huge proportion of the uninsured.”

“That should be needlepointed on a pillow,” Smith said in response to Warner’s comment. “In fact, I suspect there are some pillows that say that right now, ‘You can’t fix the country without fixing Texas.”

Another issue the panelists touched on was how the technology revolution has shifted the way in which health care providers need to think about managing patients’ expectations. With the ubiquity of Googling doctors and hospitals to learn about their performance and more, just about anyone can access information, but Masi said it’s important for people — health care institutions and patients alike — to approach the health care experience based on value and outcomes, not strictly data.

“The old paradigm was: ‘The more I knew, the better.’ The new paradigm is: ‘The better you do, the better I [the patient] do.’ That’s a huge change. Patients have developed expectations, and they continue to develop expectations,” Masi said.

The discussion then explored the topic of how hospitals and health care systems can leverage that data and proliferation of information to improve the patients’ experiences.

“The expectation from our consumer […] is how do we use the technology to improve those processes [in] the hospitals, whether it be the physician’s office that’s scheduling the appointment or during admission,” Sukin said, explaining that people demand instant access. She referenced the common phrase “there’s an app for that” and the attitudes of wanting things today and right now to be key drivers in hospitals developing better processes. “It’s those innovations that get built into it, if you have the opportunity, with new processes and new technology to be able to change where we head in the future and on.”

After the panel session, Smith opened the floor to questions from the audience members.

The first installment of the series was held in June at The University of Texas Health Science Center at San Antonio’s School of Medicine and featured state representatives Donna Howard, D-Austin; Susan King, R-Abilene; and J.D. Sheffield, R-Gatesville to talk about health care and the 84th Legislature.

Those interested in attending the third and final installment of the series can look forward to it in January 2016 in Dallas-Fort Worth. To learn more about upcoming Texas Tribune events, visit their page here for more information.

To watch the video of the whole event, visit the Texas Tribune’s page here.