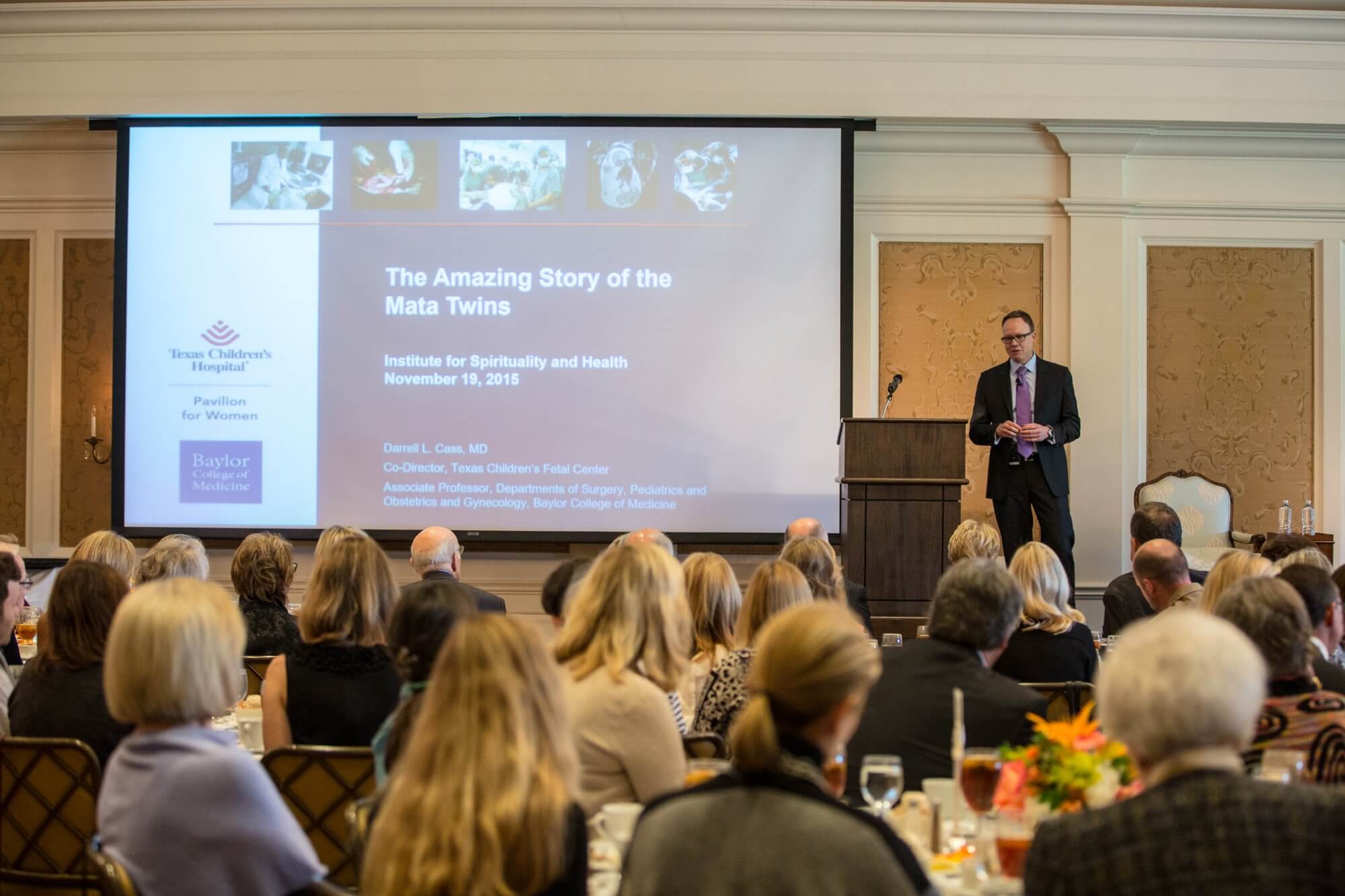 For the past three years, the Institute for Spirituality and Health has hosted the Gathering of Friends Luncheon to share stories of hope and faith, and this year was no exception. The most recent luncheon focused on the story of formerly conjoined twins Knatalye Hope and Adeline Faith Mata.

“We started the luncheon to fulfill our mission, which is to increase awareness of the role that spirituality plays in health and healing,” said John Graham, M.D., president and CEO of the Institute for Spirituality and Health. “When anyone has a child who has an illness or are in need, their spirituality increases. This is an opportunity for us to recognize spirituality at work in the life of a family who is going through a very difficult time.”

The twins’ mother, Elysse Mata, found out she was pregnant with conjoined twins when she was 19 weeks pregnant. After this realization, the family’s doctor in Lubbock, Texas, advised that Mata and her daughters be cared for at Texas Children’s Hospital.

“When we found out Elysse and Eric were expecting conjoined twins, we were a little bit shocked because we knew the risks of a pregnancy like this,” said Marie Blanco, grandmother to Knatalye and Adeline. “After that moment of shock we focused on God getting us through this journey.”

At 23 weeks, Mata moved to Houston to be under care of Texas Children’s Hospital while her husband was commuting between Lubbock and Houston. During this time, Reverend Kristin Springmeyer began working with the family as their chaplain.

“What I learned from the Mata family is unwavering faith,” said Springmeyer. “They never asked, why us? But, instead, why not us? And they have carried me through my role as a chaplain with other families.

The twins were born on April 11, 2014, and underwent surgery to become separated at only 10 months old. The twins were conjoined from chest through pelvis and shared many organs, which made the surgery challenging.

On Feb. 17, 2015, a team of doctors and nurses led by Darrell Cass, M.D., co-director of Texas Children’s Fetal Center, performed a 26-hour surgery to separate the twins and also reconstruct many organs and large parts of skin for the girls.

“The whole process was more poignant personally and spiritually for me than I anticipated,” Cass said. “As surgeons, we are very good at focusing on the medical problem and treating it. I was that way, but once we completed the surgery and the girls were separated, I found it to be very dramatic for me, personally. These girls came into the operating room on one gurney and when we were done, they rolled out on two separate gurneys as two individual people with all of the potential in the world.”

At the Gathering of Friends Luncheon, the Institute for Spirituality and Health honored the Texas Children’s Hospital team with the caring heart award.

“This Caring Heart Award means a tremendous amount to the board of trustees, me, all of our doctors and nurses who are here today,” said Mark Wallace, president and CEO of Texas Children’s Hospital. “I think the reason Texas Children’s is one of the greatest children’s and women’s hospitals in the United States and world today is because of the spirituality of the 11,000 employees, 3,000 physicians and the thousands of volunteers working at Texas Children’s Hospital.”

The Caring Heart Award was first given to recognize those who are rendering compassionate care to patients.

“This year we recognized Texas Children’s Hospital and the care team for the work they have done for the Mata twins,” said Graham. “There was a tremendous amount of spirituality that took place during the preparation, procedure and the recovery.”