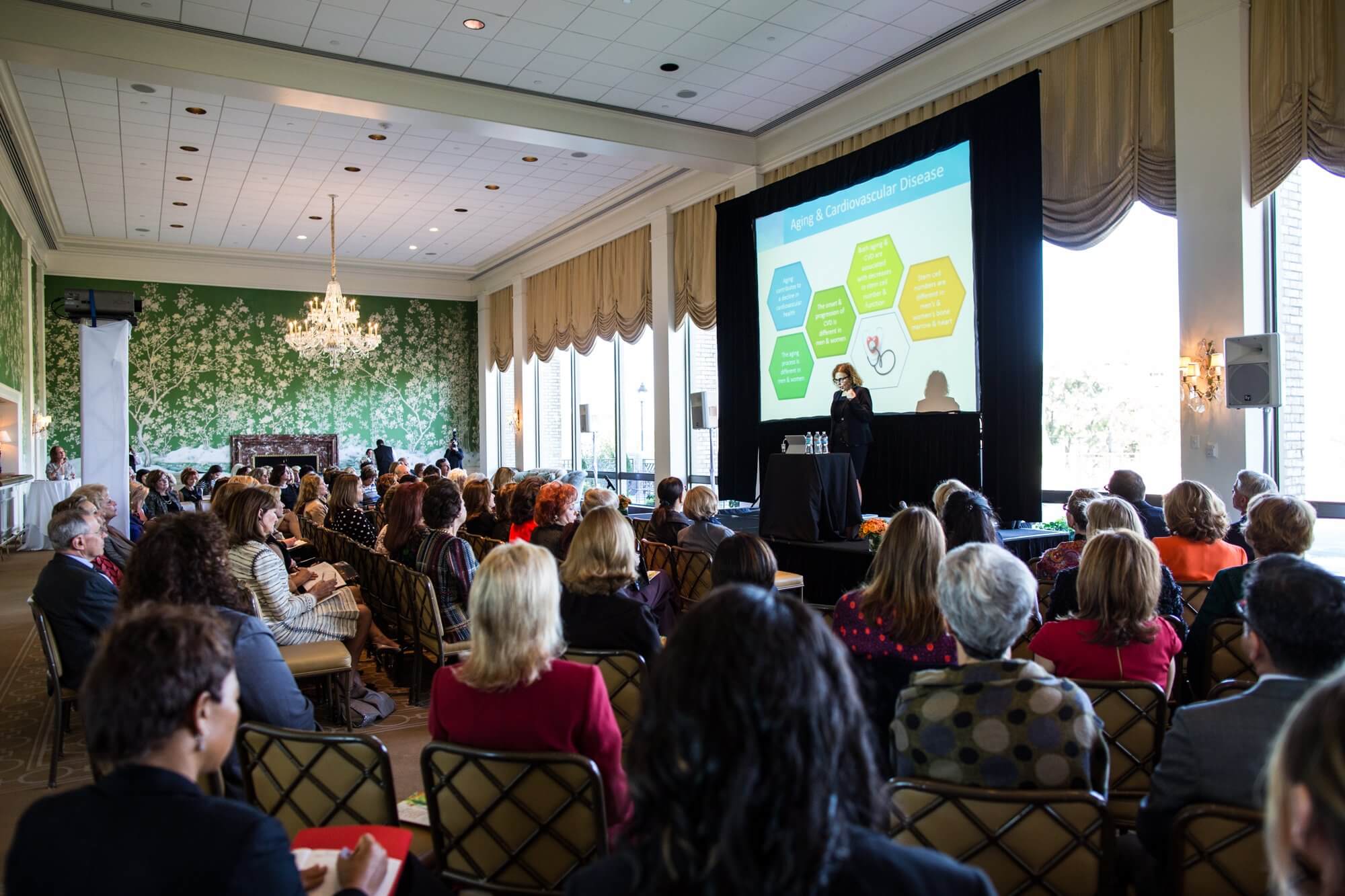 The 18th annual Huffington Women’s Health Summit was held at the River Oaks Country Club to benefit The Huffington Center on Aging at Baylor College of Medicine. The summit included an educational symposium followed by a luncheon and interview with this year’s keynote speaker and recipient of the Anne Morrow Lindbergh Award for Living with Grace and Distinction Leeza Gibbons.

The summit was started in 1997 to inform Houston women of the latest information regarding their health care.

Doris Taylor, Ph.D., was the first speaker of the day. Taylor is the director of Regenerative Medicine Research Laboratories at Texas Heart Institute and the Center for Cell and Organ Biotechnology at Texas Heart and Texas A&M University. Through her research, Taylor has found that aging is a failure of stem cells and hopes to promote a culture of aging well with regenerative medicine.

The group also heard from Nick Buettner, the director of Blue Zones. Buettner and his older brother have traveled the world to define areas where large numbers of people are living longer. Buettner and his brother have identified five blue zones in the world: the Italian island of Sardinia; Okinawa, Japan; Loma Linda, California; Costa Rica’s isolated Nicola Peninsula; and Ikaria, an isolated Greek island.

“Through our research, we learned that 80 percent of how long we live is based on our lifestyle factors and our habits, only 20 percent is based on health care and genetics,” Buttoner said. “Because of that, we wanted to find the places in the world where people are living the longest and to engineer a recipe for longevity.”

To find this recipe for longevity, the brothers embedded themselves in the five communities they deemed Blue Zones and came up with nine commonalities all of the communities shared. Moving naturally, having purpose, shedding stress, eating until you are 80 percent full, eating a plant-based diet, drinking in moderation with friends, belonging to a faith-based community, putting family first and being in the right social circle.

“The main thing we learned is that it is their environment that helps them live a longer life,” Buttoner said. “Their environment was set up to reinforce healthy behaviors in a lot of ways.”

The brothers are bringing back the lessons they learned from the Blue Zones to 28 communities in the United States to change the environment and promote making healthier decisions. As part of their plan, they have installed walking paths and biking lanes to encourage active transportation and activity.

Keynote speaker and Lindbergh Award winner Gibbons participated in a candid interview with Shara Fryer, KTRH news anchor. Gibbons began her career in television, eventually working for Entertainment Tonight. Most recently, Gibbons won Celebrity Apprentice Season 7, giving her a platform to promote her charity, Leeza’s Care Connection, which supports caregivers who are looking after their loved ones. Gibbons was inspired by her mother’s Alzheimer’s disease diagnosis.

“The information we shared today is really about the future of the U.S. aging well,” Taylor said. “We have heard about community approaches from Nick Buettner, and what I hope I did was bring a story about how stress and many of the things we take for granted really do impact our health and that we can intervene in that process—scientifically, medically—and that research needs to happen and is happening at the medical center.”

By the end of the day, the Huffington Center on Aging raised $230,000 and met their goal of informing women of the health care options available to them.

“I hope they ask the right questions, know more about what to ask their care providers, educate themselves about new options that are out there and also call me and ask me questions or let me help them find clinical trials that may be relevant and really help inform them about what information exists and how they can find it,” Taylor said.