In an unprecedented collaboration, Houston Methodist teams up with NASA to care for Space City’s most valuable players 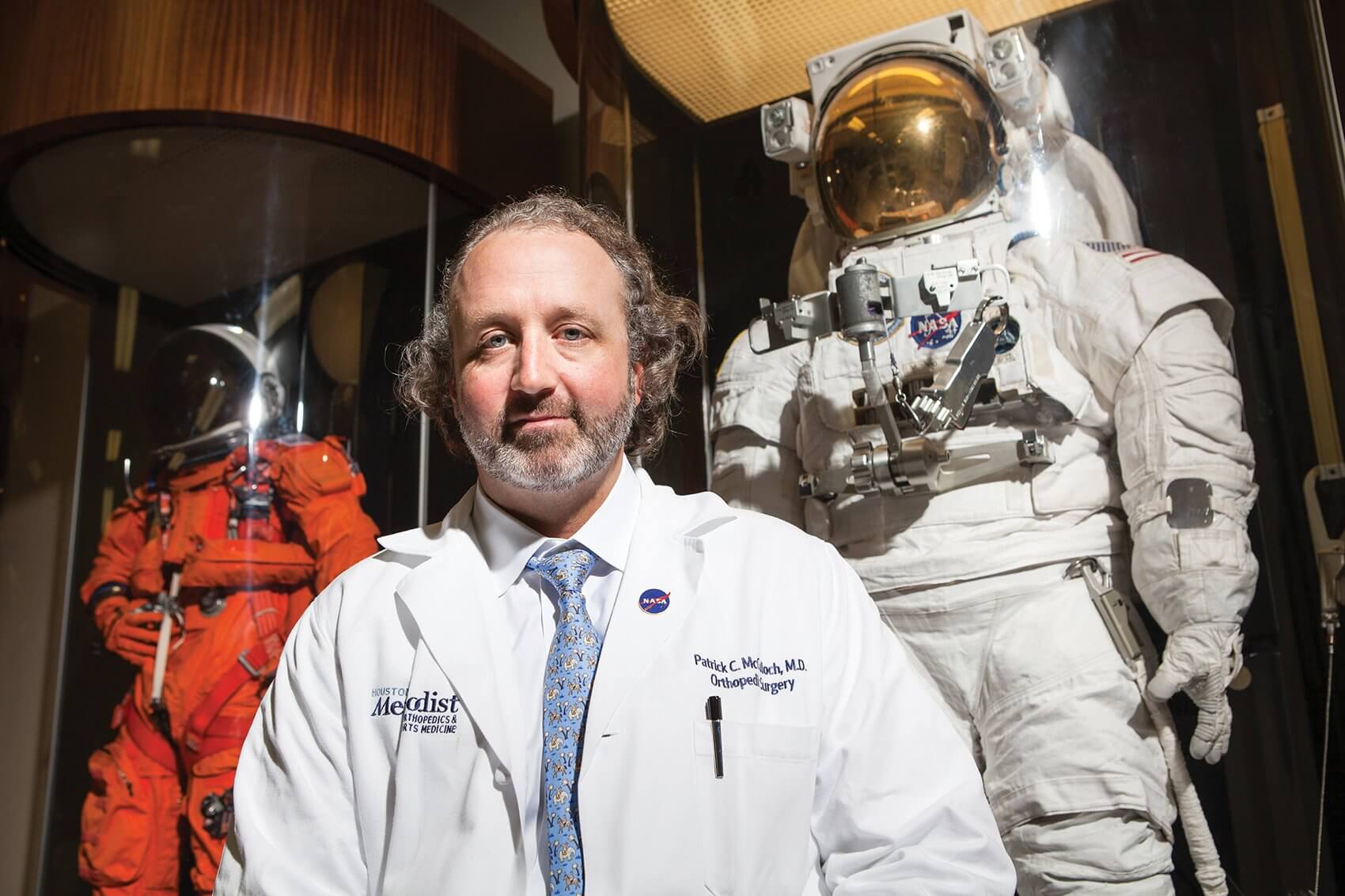 In the opening scene of the movie Gravity, long before George Clooney’s character (spoiler alert) drifts off into the boundless intergalactic unknown forever, he and a biomedical engineer played by Sandra Bullock are in the midst of upgrading a component on the Hubble Space Telescope. Dressed in spacesuits modeled after NASA’s own Extravehicular Mobility Units, or EMUs, the scene is made realistic by the awkward, rigid movements one would expect when insulated beneath 14 layers of life-preserving fabrics and gadgets. While the sheer heft of the EMU spacesuit has proven highly successful in its many missions protecting human skin from the vacuum of space, it hasn’t come without its costs—namely those of the musculoskeletal variety.

To address these issues, NASA enlisted the help of Patrick McCulloch, M.D., an orthopedic surgeon at Houston Methodist Hospital and, as of a 2012 Congress-backed Space Act Agreement between NASA and Houston Methodist, the official orthopedic consultant for the Johnson Space Center. It turns out astronauts launch a relatively high number of complaints relating to back, knee and shoulder injuries compared to the general population—so many that it seemed advantageous to bring an orthopedic specialist onto their team of physicians—known as flight surgeons—certified athletic trainers and ASCRs (astronaut strength, conditioning and rehabilitation specialists).

Each Wednesday, McCulloch’s team travels to the Johnson Space Center to provide orthopedic consultation and care to members of the astronaut corps. The onsite clinic is managed by NASA flight surgeon Rick Scheuring, D.O., who, in a previous life, worked
as a small-town family practice sports medicine doctor in Northwest Illinois. On the evening of 9/11, he went for a bike ride and somewhere between the Mississippi and Lake Michigan, decided to join the U.S. Army. He simultaneously completed a two-year aerospace medicine residency and musculoskeletal ultrasound fellowship along the way. With three tours under his belt and an Army Reserves lanyard around his neck, Scheuring, along with McCulloch, provides a unique expertise to a small population of individuals who, as far as jobs go, work in a field about as specialized as you can get.

“The competition is fierce,” McCulloch said, when asked about the astronaut selection process. “Screening is based on physical fitness and health, but they also require special skills and abilities that are uncommon. A lot of our astronauts are active or former military, many of them played college sports, and they understand the importance of teamwork and discipline. By the time they actually go into space, most of them are in their mid-40s, so we’re working with what is akin to an aging athlete population that is prone to having some musculoskeletal injuries as a result of their age, the training requirements, and the fact that the job is just physically demanding.”

By providing an onsite clinic, the astronauts are able to focus on training and rehabilitation rather than traveling to and from the Texas Medical Center for specialized orthopedic care.

“Before the clinic, astronauts would have to go see a doctor, get a referral, go see another doctor locally or in the medical center, get an MRI ordered, and then follow up again—that’s a big interruption to their already packed schedules,” McCulloch explained. “With Houston Methodist being at the Space Center weekly, we’re not only picking up on issues earlier and therefore preventing more injuries, but should anyone need an orthopedic surgery, we’ve streamlined the process so time outside the Space Center is minimal. The stakes are just higher for astronauts—they don’t have weeks or months to deal with an injury when they have a launch date set.”

McCulloch added that the program is beneficial to his fellows as well because it provides them exposure to practices unique to aerospace medicine, like the use of musculoskeletal ultrasound in place of X-rays, MRIs and CTs. Considered the stethoscope of orthopedics, it is currently the only imaging modality available in orbit and can be used for diagnostic purposes or to guide procedures or injections. Astronauts are trained to use the machines, and flight surgeons are proficient in reading and interpreting the images in real-time back on Earth—telemedicine at its finest.

Of all the injuries common to the astronaut corps—between knee complaints, back pain and herniated discs, which may or may not be related to the two to six centimeters you grow in space—shoulder issues eclipse them all. This is partly explained by the fact that arms and shoulders replace the legs as the primary mode of mobility—in microgravity, one doesn’t so much walk as pull or propel. Likewise, astronauts are forced to put pressure on their shoulders by strapping them down for routine activities such as sleep or exercise.

“It’s very difficult trying to come up with a training program for astronauts in space to help them maintain their bone density and muscle mass, which inevitably decreases in the absence of gravity,” McCulloch said. “You can’t lift weights because they don’t weigh anything. Instead, we secure crewmembers to a treadmill with bungee cords that attach around their waist and a harness that goes over their shoulders, but having 40 percent of your body weight pulling through your shoulders while you’re running is not exactly a natural phenomenon.”

Perhaps the biggest bearer of blame, however, is the spacesuit itself. Although weightless in microgravity and only worn for missions outside the shuttle, astronauts log hundreds of hours of training in the suit in preparation for each trip.

“We do a lot of training in NASA’s Neutral Buoyancy Laboratory, which holds the world’s largest swimming pool. The astronauts essentially go scuba diving in the spacesuit and practice their mission on a life-sized mock-up of the Space Station, which sits at the bottom,” McCulloch said. “Unfortunately, it is not a perfect simulator for true weightlessness.”

Neutral buoyancy is more accurately described as “hovering.” Because microgravity could not be replicated here on Earth at the scale necessary for NASA’s rigorous extravehicular activity training requirements, the sensation of half-floating, half-sinking would have to do. The disadvantage, of course, is that the astronauts still feel their weight and the weight of the suit—all 300 lbs. of it.

“They may be down there for hours working with tools and moving in awkward positions, and the spacesuit restricts some of their motion, so often they’ll be sore in their shoulders after doing these repetitive tasks over long periods of time,” McCulloch said.

While the pesky issue of gravity on Earth can’t exactly be resolved, McCulloch, Scheuring and a team at NASA have recommended several modifications to the training process to help astronauts reduce injuries while working within the constraints of the EMU. Moving forward, NASA has recruited the duo to advise its team

of engineers and designers as they build the next generation of spacesuits. By evaluating the musculoskeletal physiology of suited-up astronauts engaged in activity, they hope to identify key features that will help minimize risk and maximize performance.

“We’re looking at the factors that we believe cause injuries in some astronauts so that we can ensure we don’t engineer those into the new spacesuit,” Scheuring explained. “The problem is, the spacesuit is very complicated, so you don’t want to fix a problem with the shoulder but then cause a different problem with the elbow or the wrist or the lower back. It’s an intricate process.”

Although the new suits will almost certainly allow for improved range of motion in the shoulders and neck, NASA doesn’t expect to unveil a sleek, ergonomically pleasing design anytime soon. Because the primary requirement of the spacesuit is to provide a pressurized volume compartment to protect the oxygen-loving, temperate-adapted crewmember while exploring non-Earth environments, the EMU’s trusted bulky layers are here to stay.

“You have to think of it as a personalized spacecraft,” Scheuring said. “Ultimately, a few consolations in design have to be made for overall crew safety.”

Minute Maid Park, home stadium of the Houston Astros, is about 30 miles northwest of Johnson Space Center. There are days when McCulloch makes the trek there after a Wednesday clinic at NASA to go to his other, other full-time job: Astros team physician. (He is also the team physician for the Houston Ballet and Rice University athletics, but that is for another story.)

After working closely with both groups—astronauts and Astros—McCulloch began noticing some similarities. Aside from the obvious moniker comparisons, both engage in comparably rigorous training programs and push their bodies to the limit for maximum performance under pressure—all in the face of sleep deprivation and demanding travel schedules.

“I essentially view the astronaut corps as another professional team,” McCulloch said. “They’re a select group of highly specialized, highly valuable individuals required to work in a high-stress environment, and they’ll have periods of downtime followed by periods of high-demand physical performance with no room for error.”

Even more, both groups exhibit uncanny parallels in their incidences of injury—specifically in regards to the shoulder. As it turns out, McCulloch discovered, the analog for astronauts in a spacesuit is a major league baseball pitcher. Leveraging the cutting-edge sports medicine practices available to the Astros, McCulloch organized a consortium to bring the two medical teams together to identify injury prevention tools and rehabilitation solutions for the common problems he observed.

“Already we’ve adapted a rotator cuff injury prevention program we use in baseball to the astronaut corps,” McCulloch said. “And it’s a two-way street. In working with astronauts, especially once they’re in space, all of the variables change. It makes you question every aspect of why we do what we do and if there is a better way to do it. So it’s really led to a lot more critical thinking about the way we address every problem and whether we are doing it in the most efficient way possible, and that has spilled over into the care of all of my patients.”

The overlap of NASA’s innovative methods and the everyday life of the average American is nothing new. Modern-day energy bars were originally adapted from food created for consumption in space, technology developed for the Hubble Space Telescope was responsible for recent breakthroughs in improved digital imaging and biopsy for breast cancer patients, and a non-invasive blood analyzer planned for use during future lunar or Mars missions could eventually transform the lives of millions of diabetics who need to monitor their blood sugar daily.

“We have a real source of national pride here in Houston at the Johnson Space Center, and we have another one here in the Texas Medical Center, and the ability for us to contribute mutually in this regard is imperative for us as a leading health care institution and important for us as Americans,” McCulloch said.

The opportunities for collaboration are truly infinite, especially as missions to space become longer in duration and potentially farther away than ever before. According to NASA, setting foot on Mars could become a reality in the 2030s, and the technology developed for that kind of feat would undoubtedly have revolutionary applications in the Texas Medical Center and beyond.

“I can only imagine the problems we’re going to solve on our way to Mars,” Scheuring said. “It’s a great investment. If the president came by tomorrow and said, ‘You know what? Let’s get this accomplished by 2020 or 2025,’ we’d figure out a way to do it, just like we did with the moon. It’s a matter of having the mission and that will drive everything else. And it’s no different in medicine. I got to know Neil Armstrong well in the last couple years of his life, and that was one thing he really tried to get out there: get a difficult mission and everything else will follow—we’ll figure it out, we always have.”