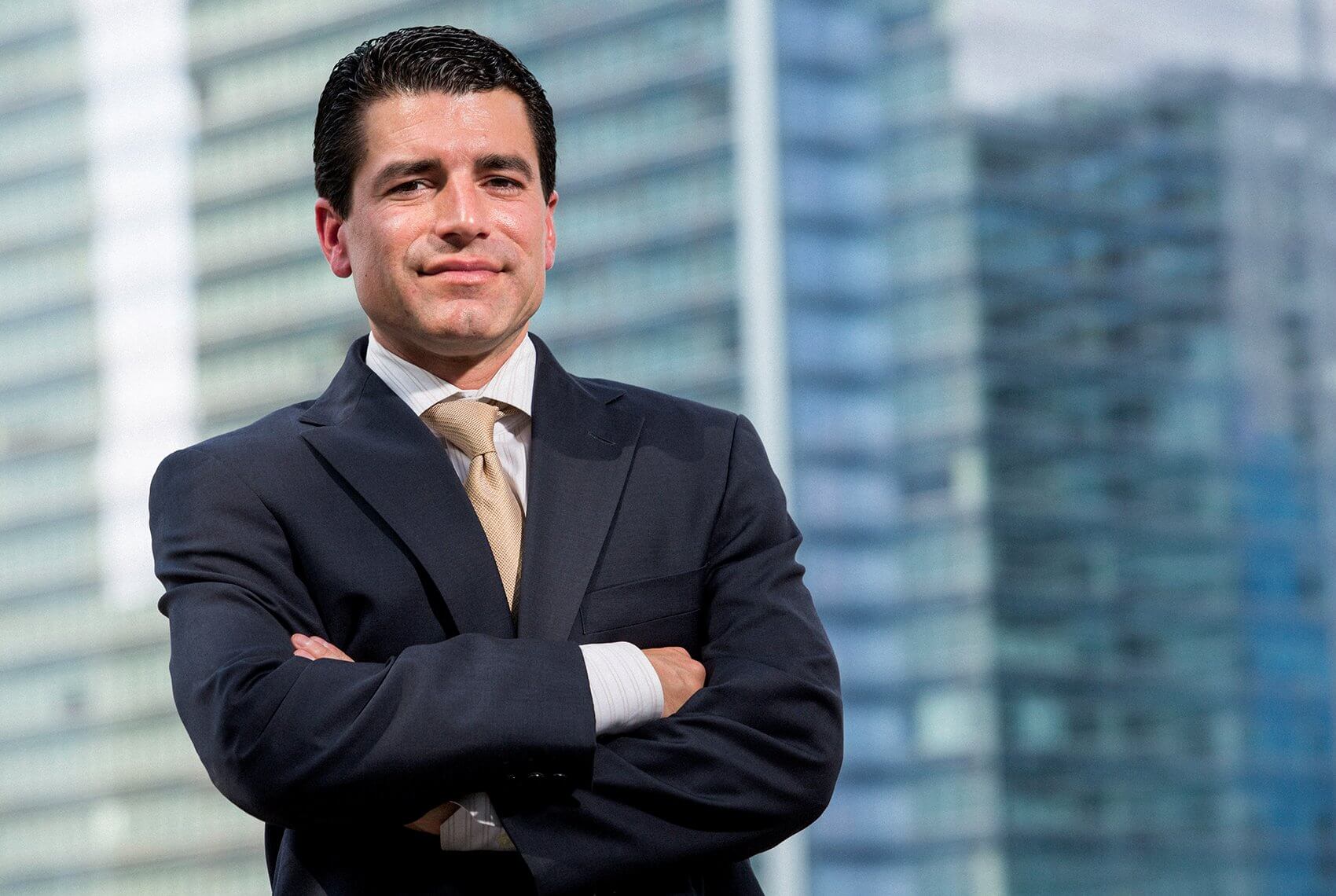 In his work as vice president of partnership and event development for Houston First Corporation, Michael Heckman has a behind-the-scenes look at what it takes to make some of the city’s biggest events possible. He sat down with Texas Medical Center Executive Vice President and Chief Strategy and Operating Officer William F. McKeon to discuss some exciting plans for the future, and how it took community involvement to bring the Super Bowl to Houston.

Q | Tell us about where you grew up.
A | I grew up in a rural part of South Central Pennsylvania called Franklin County. I always tell people that it really is a great place to be from. A lot of my extended family lived within the area and my grandparents had a farm that they owned and worked for more than 50 years, which was really a great thing for me and my brother and my cousins. We felt like there are few things better as kids than to have the farm nearby. You have plenty of space, there are fun things to do, and you can let your creativity and your imagination run wild.

So that was a big part of what we did when we were growing up. Another big thing was sports. Sports were always a central theme in my family. My father and my uncle were heavily involved in coaching sports as we moved up, and I always appreciated that, with the time that they spent and the commitment that they had to spending time with us. My uncle was the athletics director at my high school and my father on the coaching staff, so that made for a lot of great memories. I’ve always felt like sports are a good training ground for your professional career. Sports help shape character, work ethic, teamwork and commitment. Plus you can have fun along the way and build some great relationships.

Q | What was your college experience like?
A | I focused on business and communications. I went to a small school in Maryland, which, fortunately for me, is also where I met the woman who would later become my wife. I didn’t know exactly what I wanted to do down the road, I think not unlike a lot of people. I knew I wanted to work in sports, but I didn’t necessarily have a clear path as to what that would look like, which is why when the internship came available with the ball club, I decided to jump on that.

In the area that I grew up, as I mentioned it was a great place to grow up, but I knew that there was always greater opportunity that I wanted to pursue. I got the opportunity with Hyatt here in Houston in 2002 and decide to make the leap. It was a big jump
for my wife and me to relocate to a city the size of Houston, but we were happy to get here. Originally, we didn’t know how long we would be here, but truly the professional and personal opportunities here have been more than we could have imagined, and Houston has made a wonderful home for us for the past 13 years.

Q | Seems like working for Hyatt would have been a great foundation upon which to build your career here in Houston.
A | Well, it certainly was because we were deeply involved with the Greater Houston Convention and Visitors Bureau, and that’s where I really began my first type of relationship with the CVB and its leadership. Through that I was able to meet a ton of people. And the timing couldn’t have been better because that was in our run up to hosting Super Bowl XXXVIII in 2004. I was able to serve in a number of key planning capacities there with the Super Bowl Host Committee because of some relationships I had and was able to learn a tremendous amount about what it takes to organize an event of that magnitude…even though I probably wasn’t really ready to do all those things at that point. But it was trial by fire. We were also in the process of bidding on the Final Four at that time. I was able to help craft that bid that we organized in 2003, which was ultimately for the Final Four that we held here a few years ago in 2011 and I was grateful that I was in a position to play a role in Houston being able to do some special things. Like you said, it was really a foundational element for me here in Houston, to begin working with the CVB and to start to know who a lot of the players were in town.

Q | Tell us about your role with Houston First.
A | The business unit I lead really breaks down into four areas—event development and management, revenue generation, sponsorship marketing and management of Houston First’s relationships with the Final Four Local Organizing Committee and the Super Bowl LI Host Committee. A couple of those are groundbreaking initiatives at either Houston First or the GHCVB. A few years ago, at the CVB, our leadership implemented an organizational initiative to start and create annual events here for the City of Houston that would highlight our business demographics, and also have an economic impact for the city each and every year. It’s a very European model of conventions and conferences—most of theirs are done that way—where they are owned by the destination. Here in the United States, it is much different than that. Traditionally, destinations pursue events to be held in their cities. We pioneered this approach among U.S. cities to pursue this in any meaningful way. These are like managing a portfolio of startup business ventures, which is challenging, but also a great opportunity. When there was the alignment between Houston
First and the GHCVB, those initiatives merged and turned into an even larger portfolio, and an additional initiative was developed of commercializing Houston First assets that we would manage from the standpoint of developing additional revenue streams that can help us market and promote the city with even greater resources. At the same time, it sort of put on steroids this event development effort that we had started to be able to organize these events and create flagship events for Houston.

Part of what makes that especially gratifying for me is the number of extremely talented, very busy, very important professionals that come together and volunteer their time to help make these go. Folks like Dr. Robbins providing his leadership to chair Medical World Americas, Bill, your time and many of the other professionals who not only help us do Medical World Americas but also the Space Commerce Conference and Expo—including Dr. Ellen Ochoa and Johnson Space Center. I don’t even want to try to name all of the names, because I would certainly be leaving people out. But suffice it to say, to be able to sit in the room with people who are expert in these fields and listen and be merely a facilitator to help bring the right people in the room to make these things happen, to me, is one of the great privileges that I have with my job.

Q | In addition to Medical World Americas, we have Super Bowl LI coming our way. That was a tremendous feat. Tell us a bit about what it takes for our city to win a Super Bowl.
A | Because the Super Bowl is one of only a few global brands for sporting events, it is incredibly sought after here in the United States. So you have FIFA World Cup, you have the Olympics, you have Formula One Racing and then you have the NFL Super Bowl. Those are really the crème de la crème of the most recognized sporting event brands in the world. So we had last hosted in 2004—we hosted Super Bowl XXXVIII—and the community did a tremendous job of execution. Bob McNair was able to negotiate Houston hosting as part of his acquisition of the Texans back in the early 2000s, and the community did a wonderful job when it was our turn to shine and play host.

Now, I think we assumed we would get it back sooner than we did, but it’s very, very competitive from the NFL cities to host it, and with good reason. The economic impact, depending on where you are at, the study is somewhere around $500 million. The impact of the exposure is truly immeasurable. If you think about it, on Feb. 6, 2017, the Monday following the Super Bowl, Houston will be on the cover of every newspaper in America. Or with digital, it will lead almost every headline online that day. As a community, you just cannot buy that for any amount of money.

So we had bid a few times to try to get the game back. It is a very, very competitive process. The NFL then changed a bit of the process to make it more organized going forward. Our bid was for two years—either Super Bowl L in 2016 or Super Bowl LI in 2017—and we were competing against Miami and San Francisco. So three cities bidding and only two games to award. And what happens in the process is you name a chair of the bid committee, and fortunately we were able to have Ric Campo chair that for the community. He did just a fabulous job in leading the bid. We hired Sallie Sargent to come in and help pull the pieces together, because there’s actually a book of bid specs from the NFL that you have to fulfill every single specification in the bid book, and then detail whatever enhancements you want to put in, because you have to convince 32 billionaires to vote for your city.

We were fortunate that Mr. McNair felt strongly about the game being here, and he and Jamey Rootes did a great job supporting on the team side, and Ric and the Bid Committee did a magnificent job of pulling the bid together in a way that was meaningful to the NFL owners. I think it hit on the things that the NFL was looking for, by way of thematically looking at the NFL’s next 50 years, the enhancements that the community put in, and the commitment from Houston on what the ownership and the media would experience for Super Bowl LI. And then ultimately, in May 2013, the owners voted for Houston to host, which was a tremendously exciting day.

Q | Any final thoughts?
A | I think, I sort of mentioned it before, but you can only do great things when you can marshal the people and the resources and the talent together to be able to do them, and I think that’s a key part of my job and what we do. We are also fortunate to have tremendous leaders who volunteer their time to take on challenges that sometimes seem insurmountable. And I think that’s one of the takeaways, one of the things that enables our job to be done, is that kind of commitment from around the community.