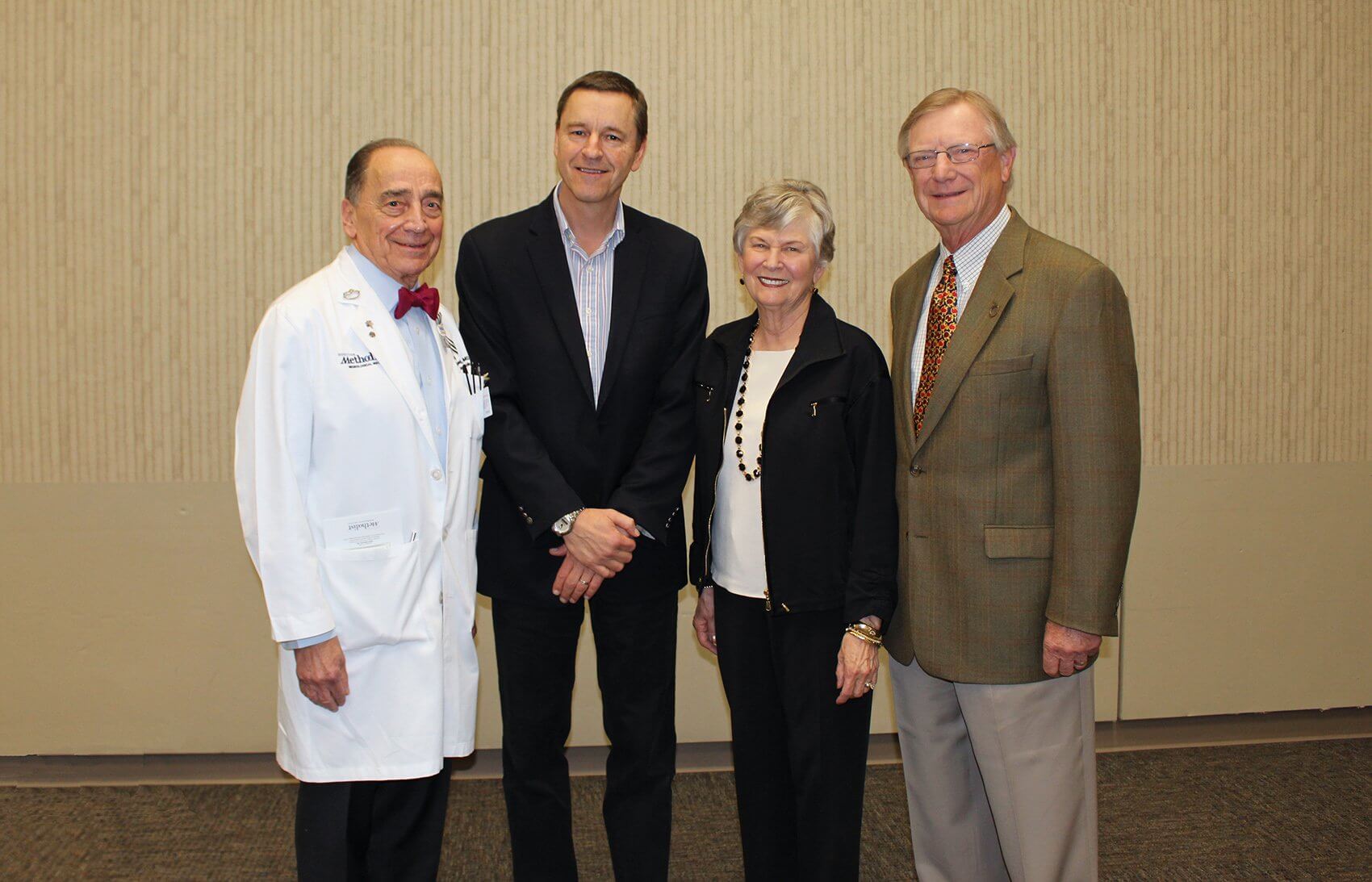 Houston Methodist Hospital recently celebrated 10 years of its annual Peggy and Gary Edwards Distinguished ALS Lecture Series. Named for a longtime Houston Methodist Hospital board member and his wife, the lecture series, as well as the Edwards ALS Research Laboratory, were created in honor of Gary Edwards’ mother, Jeanette, who passed away from complications of ALS in 1986.

The 10th lecture featured a speaker fitting for a significant anniversary: Clive Svendsen, Ph.D., one of the country’s foremost ALS researchers and a leader of the Regenerative Medicine Institute at Cedars-Sinai. Svendsen presented his work on stem cell research as it pertains to ALS.

Stanley Appel, M.D., director of Houston Methodist Neurological Institute, chair of the Department of Neurology and the Peggy and Gary Edwards Distinguished Chair in ALS, kicked off the afternoon by recognizing Gary and Peggy Edwards’ dedication to helping ALS research progress and introducing Svendsen.

“Being the 10th year, we thought it would be extremely important to have an outstanding speaker, and, as importantly, talk about a topic that we get asked every single day on rounds. Namely: are stem cells ready? Are we going to be able to put them in patients? We always have to answer that the science is there, but the transformation and translation aren’t there yet,” Appel said, adding that Svendsen’s lab is one of just a few researching stem cells related to neurological diseases.

ALS, or amyotrophic lateral sclerosis, in particular, is a neurodegenerative disease affecting both the brain and the spinal cord. There is currently no known cure for the disease, also known as Lou Gehrig’s disease, which results in paralysis and, eventually, death. A little over 5,600 people in the U.S. are diagnosed with ALS each year.

Following the introduction by Appel, Svendsen began his lecture with a frank discussion of what stem cells can and cannot do at this point in time. He acknowledged that, when it comes to stem cells, a lot of the promises made to ALS patients and those suffering from other diseases are false promises. Various websites and clinics claim they can cure ALS with stem cell therapies that Svendsen described as “modern snake oil.”

Svendsen and his team, however, are taking a hard-science approach to what stem cells can truly offer. He described his earlier work developing a way to create induced pluripotent stem cells without the requirement of a skin biopsy.

“From one blood draw, we can make these magic pluripotent stem cells within about two months, and we can make these from any ALS patient,” Svendsen said. “Then you can make any tissue in the human body from these cells.”

“Are stem cells ready? Are we going to be able to put them in patients? We always have to answer that the science is there, but the transformation and translation aren’t there yet.”

Svendsen and his team have been using their techniques to create motor neurons from samples derived from ALS patients. The goal is to learn about the mechanisms of ALS to eventually develop stem cell therapies based on treating those motor neurons in the dish. They began by studying spinal muscular atrophy, a disease Svendsen referred to as “junior ALS.” It occurs in young children and is caused by a genetic mutation. The children are generally paralyzed by age one, due to the disease.

Through their development of motor neurons from samples taken from children with spinal muscular atrophy, Svendsen and his team discovered that between six and 10 weeks, the motor neurons began to die in the dish just as they died in the patient.

“For the first time, we modeled a disease in the dish, a neurodegenerative disease,” he said. “We’ve since done a lot of work to see what drugs would slow down degeneration in the dish. This is extraordinary that we can now get to this level of motor neurons in the dish.”

Svendsen has also been able to measure the activity of the neurons and track how they are functioning, thereby discovering that in the case of ALS, the neurons are actually initially hyper-excited—firing too much—in the early stages of the disease. In later stages, they slow down and become hypo-excited.

Svendsen and his fellow researchers are currently in the process of collecting samples from 1,000 ALS patients. They plan to track patients clinically, while at the same time collecting metabolic, proteomic and genomic data from the samples.

“From this we’ll be able to develop theories and mechanisms depending on which genes and proteins are affected, identify targets, in silico or in the dish give drugs to see if we reverse any of these effects, and then, finally, think about personalized medicine,” he said.

Svendsen also discussed his research devoted to bringing stem cells from the laboratory to the bedside.

“We think modeling in the dish will lead to really exciting results, but patients want therapies now,” he said. “How can we use these cells in therapies?”

He described recent work done by his team to discover that, in ALS patients, astrocytes—a type of cell in the brain and spinal cord—get sick and degenerate. Closely behind, or perhaps at the same time, the motor neurons also get sick.

“There’s a relationship between these cells [astrocytes and motor neurons] that is extremely important,” Svendsen said. “Then the motor neuron pulls away from the muscle and starts to degenerate, and you lose the ability to move. If you can replace the astrocyte, you can restore the connection.”

Svendsen and his team have engineered astrocytes that can also release GDNF, a protein that can protect motor neurons from dying. The goal is astrocyte replacement combined with GDNF therapy. Svendsen’s hypothesis is that replacing sick astrocytes and releasing GDNF will help ALS patients.

In rat models, the transplants show that not only do the transplanted cells respond to damage, migrating up and down the spinal cord to damaged areas, but they also increase motor neuron survival four to fivefold. Following the initial research, they were approved for a clinical trial to start next year.

Svendsen’s lecture drew a large crowd and a number of questions from attendees. Appel said Svendsen’s work embodies the immense strides that have been made in ALS research in recent years, as well as the perennial challenge researchers face trying to bring their scientific work to patients.

“We’ve got all this progress and all of us are trying to translate this new information, this great basic science, into therapies that make a difference in patients’ lives,” Appel said. “Going from the bench to the bedside.”