An Evening of Disruptive Innovation with Whitney Johnson

An Evening of Disruptive Innovation with Whitney Johnson 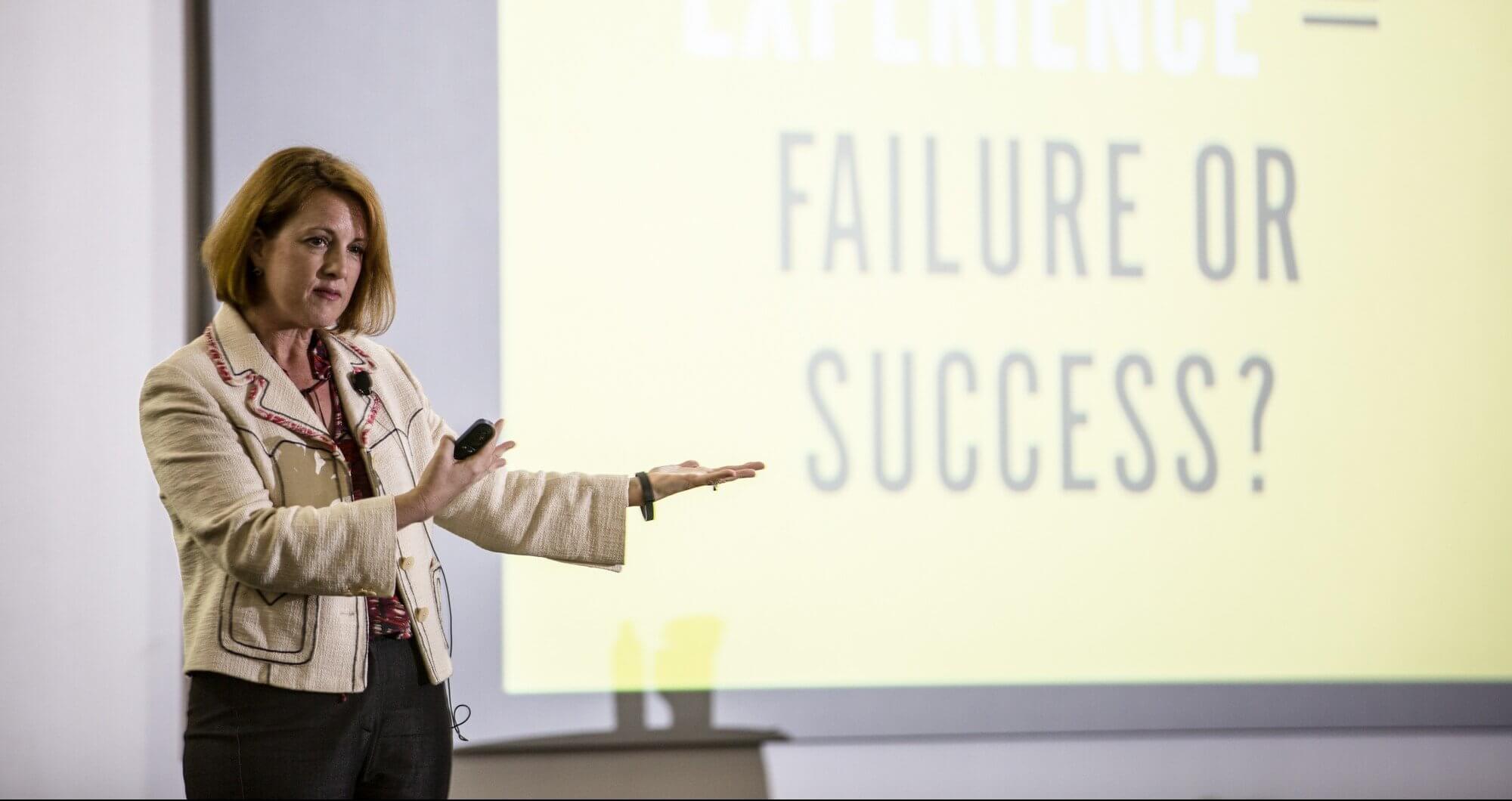 When she first arrived in New York City, without connections or a career path, Whitney Johnson vividly remembers her first time crossing over the crest of the George Washington Bridge into Manhattan.

“I was terrified,” she said. “I had come with my husband so that he could pursue his Ph.D. at Columbia, and I would never, ever have gone to New York on my own. For the first week, I wouldn’t go anywhere by myself. But my husband’s Ph.D. was going to take at least seven years, and we needed to put food on the table, so I had to go outside of our 17th floor apartment and get a job. I was a music major, so I went with the logical choice: Wall Street.”

Without ever having set foot inside of a business course, Johnson quickly propelled herself through the Wall Street jungle. After working for a retail broker in Midtown, she began taking business classes at night. Bolstered by support from her boss, she was able to transition from secretary to investment banker before eventually securing a position as an equity analyst. Today, she is an investor, speaker, author and leading thinker on driving innovation through personal disruption.

How did Johnson achieve the transition from Institutional Investor-ranked analyst to international thought leader in innovation and one of Fortune magazine’s Most Influential Women of 2014?

“When I walked onto Wall Street through the secretarial side door, and also when I walked off to become an entrepreneur, I was a disruptor,” she noted. “Disruptive innovation describes a low-end or new innovation that upends an industry. In my case, I’d started at the low end of my career, I had climbed to the top of the ladder, and now I wanted to upend my career.”

On Thursday, Oct. 29, Johnson headlined a reception at TMCx entitled, “An Evening of Disruptive Innovation with Whitney Johnson.” Organized by Neighborhood Centers Inc.—which has aimed to help all Houstonians have opportunities for education, health and work since the agency was founded in 1907—Johnson’s presentation guided attendees through various trials and triumphs throughout her career, providing gems of insight along the way.

“There are volumes of research indicating that the odds of success improve for companies when you pursue a disruptive course,” she said. “After applying these frameworks to individuals, I’m persuaded that the best way to drive corporate innovation is through personal disruption. If you can learn to ride the S-curve of learning and mastery, you will have a competitive advantage in an era of accelerating disruption. Whether you’re an individual or an organization, there are seven variables that allow you to speed up progress along the curve.”

From the simplicity of “embrace your constraints,” to the common-sense pragmatism of “step back in order to grow,” the ideas presented were refreshingly grounded and impactful. Reinforcing each idea with statistics, corporate examples, personal anecdotes and poignant quotes from John Milton to T.S. Elliot— “Do I dare disturb the universe?” —Johnson made an impassioned case for the value of extending yourself beyond your comfort zone.

“There’s one other thing that the textbooks on disruption don’t tell you: it’s, by definition, scary and lonely,” said Johnson. “It doesn’t mean you shouldn’t disrupt. It just means, if it’s scary and lonely, you’re probably on the right track. That’s why we need to bring our dreams to work. When we dream we hunger for a better life; we become problem solvers, letting nothing stand in our way. Dreaming is the engine of disruption and the odds of success are always higher when we pursue a disruptive course.”

The space at TMCx—with words like ‘collaboration’ bending around corners and blueprints for some of history’s most prominent innovations stamped across the walls—was as an ideal platform for Johnson’s message.

“I don’t think anyone here could miss the absolute perfection of this space for this talk,” said Angela Blanchard, president and CEO of Neighborhood Centers Inc, in her opening remarks. “They didn’t paint ‘disruptive innovation’ on the wall for the benefit of Whitney.

“The knowledge and wisdom of disruption in our world today actually has great power in our personal lives, but I had never heard anyone get up, make that connection and describe it the way Whitney does,’” she added. “She has a special gift for taking something that’s really powerful in the world and making it pertinent to our personal lives.”

That proficiency at taking generalizations and making them feel intimate, personal and profound was evident in every aspect of Johnson’s presentation. In her closing remarks, before inviting attendees to sign copies of her books, those ideas couldn’t be clearer.

“Most of us are quite adept at doing the math around our future when the path is linear,” said Johnson. “But neither business, nor life, is linear, and what the brain craves, even requires, is the delicious dopamine of the unpredictable. We give a lot of airtime to buying and building disruptive companies, and well we should, but innovation ultimately begins on the inside. […] Because companies don’t disrupt—people do.”