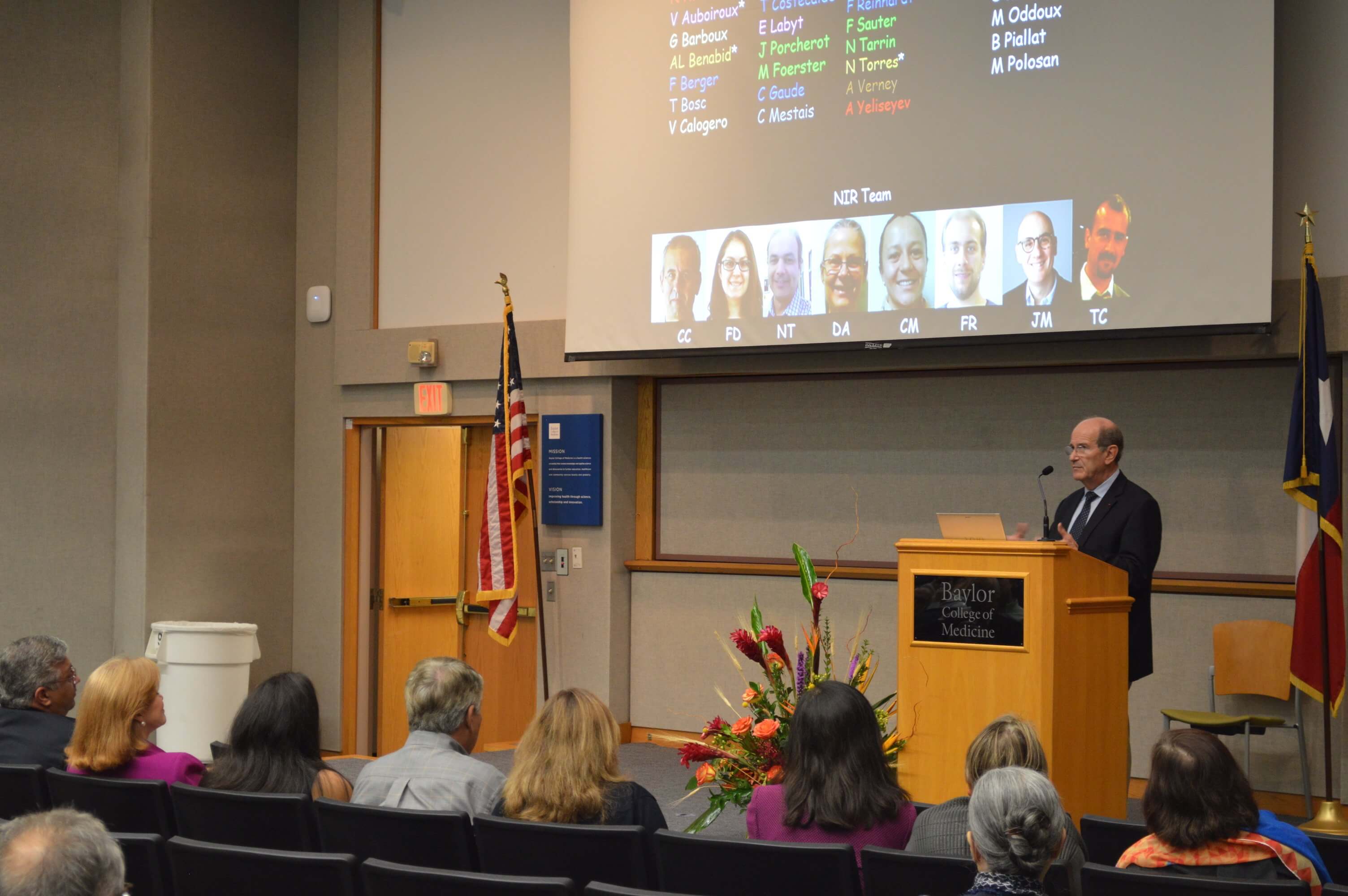 Benabid is known for many things: He is the professor emeritus of biophysics at Université Joseph Fourier in Grenoble, France, chairman of the board of Clinatec, member of the French Academy of Sciences and scientific advisor at the Atomic Energy Commission, but he is best known for pioneering the development of deep brain stimulation for treating Parkinson’s disease and other movement disorders in 1987. Benabid discovered that using high-frequency stimulation of the subthalamic nucleus significantly reduces tremors and restores motor function in patients with advanced Parkinson’s disease. The surgical technique proved to be an effective and reversible method for remedying neuronal misfiring, which causes the brain to send mixed signals to the body.

The NRI holds an annual lectureship in which the organization selects a distinguished scientist whose innovative research impacts the medical field, particularly in neurological diseases, to speak about their work and research.

“Professor Benabid was the perfect candidate to invite for this, and, after inviting him, it was a true affirmation of his innovation and the impact of his work,” said Huda Zoghbi, M.D., director of the NRI and professor in the departments of pediatrics, molecular and human genetics, neurology and neuroscience at Baylor College of Medicine. “Hearing from him firsthand all of the approaches he’s taken and all of the new approaches he’s now planning to modulate the activity of the brain […] was very refreshing and very inspiring for all of our faculty and students,” Zoghbi said.

Along with his colleague Mahlon DeLong, Benabid received the 2014 Lasker-DeBakey Clinical Medical Research Award and 2015 Breakthrough Prize in Life Sciences, which recognizes scientists’ work in advancing the understanding of living systems and extending human life.

Benabid delivered his lecture, titled “Current Perspectives in Neuromodulation: From Electrons to Photons,” to a diverse audience of medical students, researchers, doctors and innovators at Baylor’s Cullen Auditorium. He discussed the various applications of his work to treat patients with Parkinson’s disease, as well as patients suffering from other neurological and psychiatric disorders — including obsessive compulsive disorder, Tourette’s syndrome and Alzheimer’s disease.

“I was amazed at how many different diseases this technology is going to impact, and I was unaware of how far it has come,” said Christopher Cummings, Ph.D., director of research development at the NRI and assistant professor of molecular and human genetics at Baylor College of Medicine.

Following the lecture, Texas Medical Center doctors, researchers and members of the French Consulate participated in a roundtable discussion on Friday in which they discussed various applications for Benabid’s work and new ideas and opportunities for future collaboration.

“We are trying to see what we could do to strengthen the relationship [with the NRI and the Texas Medical Center],” Benabid said. “This exchange was short, but it was extremely profitable for me and, for them, they are kind enough to tell me that it was interesting also. We really share the same concept of having a lot of people doing different things, working together, putting their different knowledge and making a global thinking machine.”

“I think what would be exciting would be to explore the possibility of forming some sort of group of people from Rice, the NRI, Baylor, Texas Children’s Hospital and other engineering-heavy groups here in the states together with the work carried on in [Benabid’s] lab,” Cummings added, echoing Benabid’s interest in developing a more collaborative scientific community.

The NRI and lecture were made possible by donations from Nijad and Zeina Fares and Cynthia and Anthony Petrello, respectively.