At institutions across the Texas Medical Center, researchers are taking regenerative medicine research to the next level 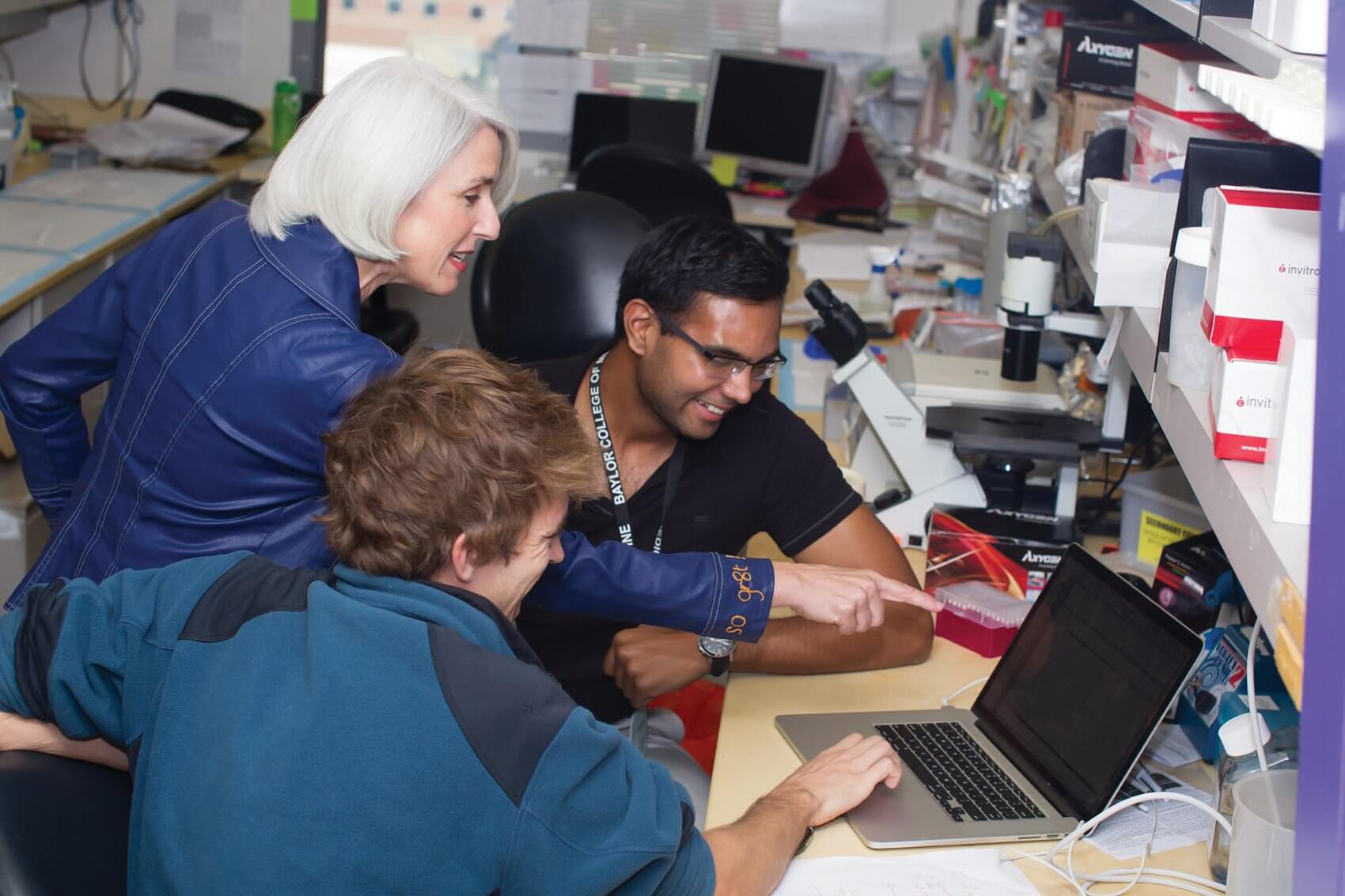 Everything starts somewhere. An acorn is one of nature’s many examples of pure potential, condensing the majesty of a towering oak tree into something that can rest comfortably in the palm of your hand. Seeds sprout into tomato plants; eggs crack open to reveal chicks; butterflies emerge dramatically from their cocoons and tadpoles transform into toads. For all living things, those origins can be traced back to stem cells, one of life’s building blocks, thanks to their ability to develop into a multitude of different cell types during early life and development.

“For me, it’s easier to view things as emanating from the most fundamental element, whether you’re talking about organs or organisms,” said Brian R. Davis, Ph.D., director of the Center for Stem Cell and Regenerative Medicine at The University of Texas Health Science Center at Houston (UTHealth) Medical School. “Everything arises from stem cells.”

At institutions across the Texas Medical Center, scientists are tapping into the many possibilities presented by stem cells, leveraging their differential capacity to fuel major advances in regenerative medicine. For Davis, also C. Harold and Lorine G. Wallace Distinguished University Chair at UTHealth Medical School and a faculty member at The University of Texas Graduate School of Biomedical Sciences at Houston, his interest in regenerative medicine stems from that desire to start with the basics.

“My background is originally in theoretical physics, not in biology,” he said. “My interest in physics was always trying to understand things at their most elemental level, whether it’s how the Big Bang created the universe or how elementary particles form everything. In biology, from circulatory networks to organ systems, I began to realize the crucial role played by stem cells and their regenerative capacity.”

While stem cells are a singular thread in the tapestry of living things, their ability to give rise to specialized cell types and renew themselves is a unique advantage. The use of embryonic stem cells—derived from embryos, as the name suggests—are rife with thorny ethical issues, but scientists have found a way to generate stem cells from any individual in the comfort of their laboratories.

“Basically, we have the ability to take someone’s skin or hair follicles and make a stem cell that, in principle, looks and behaves very similarly to embryonic stem cells,” Davis said. “We can turn them, with the right recipe or protocol, into blood cells or lung cells right here in the laboratory. On this floor alone, we have people making neurons, cartilage, bone, muscle cells, lung cells and even blood cells.”

In addition to exploring the creation of custom-made stem cells tailored for individual patients—known as induced pluripotent stem cells (iPSCs) and pioneered by Japanese Nobel Prize- winning researcher Shinya Yamanaka, M.D., Ph.D., in 2006—Davis is invested in repairing genetic mutations that arise in stem cells. He believes that both the mutant and corrected stem cells could provide scientists with new research methods for evaluating and treating disease.

“Over the last decade, there have been tremendous advances in our ability to correct mutations in chromosomal DNA in a very site-specific way,” Davis said. “In any given cell, we have six billion base pairs that give rise to DNA. Five to 10 years ago, we didn’t have a way to get in and correct any abnormalities. Now, like a word processor, we can scan and find out exactly where the mutation is. Essentially, similar to using a computer mouse, we can go in and ‘highlight’ the area that is mutant or incorrect, and basically ‘cut and replace’ it with the correct sequence.”

Setting out to cultivate innovative treatments for patients with hereditary diseases, Davis, along with UTHealth researchers Philipp Kramer, Ph.D., Jacquelin Bui-Griffith, Ph.D., and Ana M. Crane, Ph.D., found a way to repair, in stem cells, the genetic mutations responsible for cystic fibrosis—a life-threatening genetic disorder that clogs the lungs with mucus, leading to chronic bacterial infections that make it increasingly difficult for patients to breathe.

“In my lab, we combine that technology of making those patient-specific stem cells with these genetic corrections,” Davis said. “That way, we can essentially erase the defect at the source.”

By taking skin cells from patients presenting with cystic fibrosis, converting them to iPSCs, and finally correcting the defective protein in a gene called CFTR, Davis and his colleagues were able to demonstrate that the corrected cells functioned normally. Their findings appeared in Stem Cell Reports, the official journal of The International Society for Stem Cell Researchers.

“We hope to continue generating cells that can be used to deliver back to the patient, which aren’t rejected because they came from that individual—our immune system attacks foreign cells, but not our own cells,” Davis added. “We want to use that approach on a variety of diseases, so that we can actually deliver these cells therapeutically.”

At Rice University, scientists are capitalizing on the university’s distinct strength in bioengineering to propel regenerative medicine forward. For one rising bioengineer, her investment in regeneration was catalyzed by a particularly persuasive conversation.

“My interest in the regeneration of tissue for implantation purposes was probably first sparked by talking with Chuck Fraser,” said Jane Grande-Allen, Ph.D., Isabel C. Cameron Professor of Bioengineering at Rice University, referring to the chief of congenital heart surgery at Texas Children’s Hospital. “He knew that I had moved to town to be a young assistant professor in bioengineering—my focus area is heart valves. He asked me to meet and talk with him, and he laid out the clinical need to kick off heart valve research for regenerative medicine. I wasn’t originally interested in those areas, but after talking with him, I was completely sold on it.”

“Getting to know these valve cells, and trying to develop biomaterials that would help support them in a tissue engineering setting, actually translates well to a lot of other things—blood vessels for example,” she explained. “We’re studying how heart valve cells respond to mechanical stimulation using devices that we’ve built. We’re even applying some of those techniques to study lung cancer and intestinal disease.”

With a firm foundation in biomechanics, Grande-Allen’s research also focuses on using cells, organ cultures, and tissue engineering approaches to investigate valve disease from a more mechanical point of view.

“In our small intestinal models—as part of a large research grant that we received with Baylor and MD Anderson—we’re creating a framework to study how intestinal cells become infected,” Grande-Allen said. “We don’t want to implant these [tissue models] in anybody—it’s more about studying disease. We’ll have these little tissue- engineered segments of small intestinal wall, complete with villi, and the epithelial cells in the right place.

“Our goal is, ultimately, to develop an in vitro intestinal model that can be reliably infected by viruses and bacteria—in the same way that these agents infect the human gut—so that we can send this model out to labs around the country,” she added. “That way, they can use it as a ‘lab-on-a-chip’ device and study the biology of infection themselves.”

That three-way partnership serves as a microcosm for the collaborative potential throughout the Texas Medical Center. One researcher at a collaborating institution, The University of Texas MD Anderson Cancer Center, is driving regeneration forward by studying the human body’s poster child for renewal—the liver.

“My work in regenerative medicine has mostly been in liver regeneration,” said Michelle C. Barton, Ph.D., professor in the Department of Epigenetics and Molecular Carcinogenesis at MD Anderson and a joint dean at The University of Texas Graduate School of Biomedical Sciences at Houston. “What fascinates me there is that the liver regenerates at all—it’s just so bizarre. The liver is the only full size organ that can completely regenerate itself when two thirds of it is cut away or injured. It’s a really cool system.”

Under the supervision of its namesake, the Barton Laboratory at MD Anderson studies basic mechanisms of gene expression during development, tissue generation, and throughout an individual’s experience with cancer. Much of their work zeroes in on a particular protein, known as p53, which is the most highly mutated gene in all human cancers.

“The big issue with cancers is that they can escape treatment, often due to a stem cell population that’s hidden away from normal therapeutics,” Barton explained. “In fact, a protein partner that we discovered for p53 is overexpressed in at least half a dozen human cancers and is of interest as a potential therapeutic target for cancers. It’s been a long journey, but what we’ve learned in liver regeneration and stem cells makes us hopeful.”

Performing more than 865 stem cell transplants for adults and children each year, MD Anderson’s Stem Cell Transplantation and Cellular Therapy Center treats a wide variety of cancers, hematologic diseases and autoimmune disorders. Across the street at Baylor College of Medicine, where scientists are also utilizing stem cells for present day clinical applications, one researcher has her sights set on the future.

“Even when I was doing my Ph.D. thesis, I was interested in stem cell biology as a whole,” said Margaret “Peggy” Goodell, Ph.D., professor of pediatrics and molecular and human genetics at Baylor College of Medicine, where she is also director of the Stem Cells and Regenerative Medicine Center. “This was long before stem cells were popular to study, but I realized that they had enormous potential to generate many different cell types—I envisioned what that long-term potential could catalyze.”

Part of what brought Goodell to Baylor, she recalled, was the prospect of participating in their Center for Cell and Gene Therapy, where scientists work to translate novel cell and gene therapies from the laboratory to the clinic. As part of the overarching Center for Cell and Gene Therapy, Goodell Lab focuses its efforts on hematopoietic stem cells—those that form the blood. Goodell and her colleagues examine blood-based stem cells from a basic biology perspective, striving to understand how they continuously regenerate, while also addressing what happens when various diseases of the blood, from leukemia to lymphoma, emerge.

While many of the seeds for inter-institutional partnerships have already been sown, Goodell noted that even stronger collaborations are right below the surface, waiting to emerge.

“I’ve been talking to many of the investigators across the Texas Medical Center that are involved in stem cell research for years about specific projects,” she said. “For others, I’ve either actively collaborated with them or at least interacted with them at some joint conferences. We all have a very collaborative outlook on it—I think the more that we work together and interact, the stronger we will be.”

“It’s so crucial to promote these kinds of interactions,” Davis said. “Because we have institutions that are so close to each other, each of which has significant strength in stem cell and regenerative medicine, anything we can do to strengthen collaboration and interaction is a huge win for all of us.”

Oct. 15 at TMCx, in addition the two Houston-wide symposia on regenerative medicine that were led by The Gulf Coast Consortia in October 2014 and June 2015, the efforts to coalesce regenerative medicine expertise throughout the medical center have already taken hold. Hopefully, we won’t have to wait too long.