An event six months in the making, TMCx Demo Day provides a platform for the startups in the Texas Medical Center’s accelerator to pitch their solutions 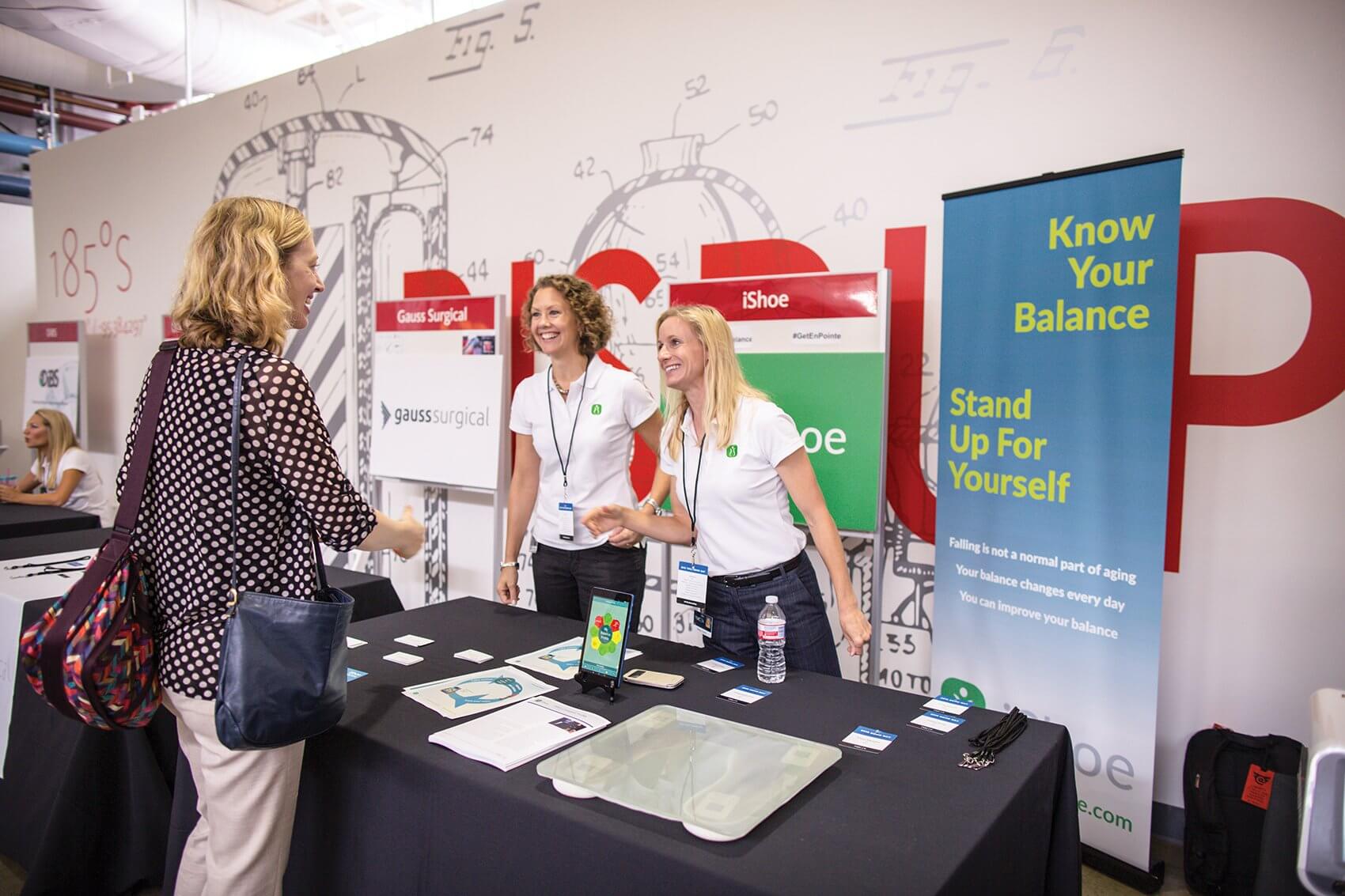 First there was a grueling, two-week boot camp. Then a continuous stream of curriculum sessions in a brightly lit classroom. Interspersed throughout, introductions were made and firm handshakes exchanged. But for the startup companies that participated in the inaugural class of TMCx, the Texas Medical Center’s accelerator program, there was one format they were all intimately acquainted with: the pitch. After weeks of working on slide decks and crystallizing messaging; countless hours spent rehearsing, refining, and rehearsing again; and that magnetic moment on stage, all eyes squarely directed at the front of the room, everything has to coalesce in a showcase of confidence and poise in just four minutes. And on Sept. 10, all the chips were on the table.

“I’m really proud to see this many people here today,” said Robert C. Robbins, M.D., president and chief executive officer of the Texas Medical Center, to the 400 investors, clinicians, entrepreneurs and community members gathered at TMCx. “We all want to make the Texas Medical Center better, and this is a huge part of that. This is one of the reasons why we came here, and I’m incredibly proud of this program.”

TMCx Demo Day, the culmination of the accelerator’s first class and a mile-marker of progress for the entrepreneurs and the Texas Medical Center alike, was an event six months in the making. Throughout the day, attendees had the opportunity to hear the companies pitch, witness live demonstrations of their technologies and get a glimpse of their future plans.

“I’m thrilled to see the growth of all of these people, in such a short period of time,” said William F. McKeon, executive vice president and chief strategy and operating officer of the Texas Medical Center. “It was exciting helping contribute to their vision, moving them forward and connecting them with potential customers who will be the ultimate determinate of their success. Helping them realize that growth has been tremendous.”

Throughout the six-month program, the 21 companies have collectively amassed $12 million in follow-on funding, successfully developed 35 customer engagements, including pilots and validations studies, and hired 25 new employees. There have even been four acquisition offers—the gold standard of success in the startup world.

“Our statistics from the first six months of the program demonstrate the incredible progress these startups have made,” said Lindsay Deneault, business strategist at TMCx, during her opening remarks. “Those figures and the strides they represent didn’t just materialize out of nowhere. Over the course of the program, we guided our companies through structured workshops, networking opportunities, and facilitated introductions within the medical center. We wanted to allow them time to apply the teachings we’ve put them through as they built their business.”

Throughout the curriculum, over 120 advisors, coming from both clinical and business backgrounds, lent their time and expertise in everything from the mock board meetings to one-on- one sessions. According to Deneault, fostering those relationships was critical to the success of the program. On Demo Day, an advisor introduced each company before they plunged into their final pitch.

“My involvement as an advisor has been very fruitful,” said Alexander Izaguirre, Ph.D., director of special projects at Baylor College of Medicine and a TMCx advisor. “I take a very visionary type of approach to technology, where I’m not as interested
in what people can do today as where they can go tomorrow. In working with these companies, I’ve gotten to see what some of them can do. I wouldn’t be surprised if many of them go on to succeed and develop themselves into big players in the industry.”

A distinctively diverse cohort—ranging from early to late stage in terms of growth, and hailing from Houston, San Fransisco, Israel, Germany and everywhere in between—the 68 individuals in TMCx’s first

“Many of the Texas-based companies were developed out of Texas Medical Center institutions,” Robbins said. “That’s the goal, of course—to help young students and young faculty members develop new companies that can be successful and, ultimately, stay here in Texas.

“One of our companies, BrainCheck, is an outgrowth of Baylor College of Medicine,” he added. “Maybe one day we’ll all have to check in with an iPad and see if we’re fit to perform surgery or operate heavy machinery. On the sports field, BrainCheck has a very clever way to assess brain functioning.” According to their Chief Executive Officer, Yael Katz, Ph.D., BrainCheck—a company developing a mobile, interactive test for cognitive health issues such as concussions and dementia—has already breached several target demographics. Their technology is in use in seven schools, two emergency rooms, four clinics and two senior centers. For her, the consumer market is close at hand.

“Now we actually have a product, so it’s an actual, tangible device that people can use,” said Katz. “We invested a lot in the technology, so it’s scalable, HIPAA compliant, fully secured and really nicely designed. We’ve tested about 1,000 people so far and have integrated all of that amazing feedback into the product itself.”

Similar success stories weren’t hard to find. On Demo Day, pitches that painted a portrait of rapid progress and sustained development were common. The first company to present, Gauss Surgical, demonstrated the huge strides taken by many of the founders.

“We accept that bleeding is a function of what we do in surgery, and I think part of innovation is questioning whether or not that’s a reality,” said Alan B. Lumsden, M.D., medical director of the Houston Methodist DeBakey Heart & Vascular Center, in his advisor introduction. “Really, bleeding is either a function of disease, bad surgery or bad technology. At the end of the day, blood loss is a negotiation between the surgeon and the anesthesiologist. For somebody in my position to effect change, I have to be able to measure that.”

“Along comes this company, and they told me that they were going to hold up their iPads and detect how much blood a patient has lost using colorimetric analysis,” Lumsden
said. “We were pretty skeptical. Unbeknownst to us, one of our surgeons took 24 ccs of blood, squirted it into a receptacle and checked it against Gauss’ technology. It registered 24 ccs. We were stunned.

“At the same time, none of this stuff is going to work if it doesn’t integrate into our workflow and is easy for our nurses to utilize,” he added. “You can have a great idea, but it has to be usable on a daily basis. We’re delighted to have Gauss Surgical here with TMCx, and I’m very excited about the opportunity to work with them. It’s a privilege to
be involved.”

“That’s the reason we actually came to Houston from California,” said Milton B. McColl, M.D., chief executive officer of Gauss Surgical. “We wanted to work with people like Alan and Methodist who are at the cutting edge of technology and can help us develop those technologies as we move forward.”

For Redox, a company making it easier to interoperate with electronic health records, their current ambitions offer a marked contrast to their status six months prior. Their centralized interface engine enables users, from health systems to app developers, to easily exchange health data. In lowering the barriers of entry for new software applications to enter the health IT market, Redox is paving the way for users to make a potentially groundbreaking impact on patient care.

“If you had seen Redox in March, we would have been actively developing new data models and fielding a lot of new requests,” said Devin Soelberg, chief customer officer at Redox. “Fast forward to now, and the platform and service offerings we have available are much more robust. Most of what people need from us is already commercially available, which is allowing us to pivot our attention towards real growth. That’s opening up whole new avenues of interest for us.”

Setting sail into bold new markets has defined the ambitions of Medical Adhesive Revolution, a German-born biotech company seeking to establish itself in the United States—and potentially prompt a new evolution in wound closure through their next-generation surgical adhesive.

“I’ve caused a lot of bleeding in my time, and their product can put a stop to that,” deadpanned Robbins, referring to his tenure as an internationally recognized cardiac surgeon. “Be sure to watch them very closely. I think they’re going to be a successful acquisition in the field of wound care.”

“Today is the conclusion of a great, new chapter for our company. In fact, it’s the first chapter in our U.S. history,” said Alexander Schueller, president of Medical Adhesive Revolution USA. “It has been a time of charting our course, based on the feedback from our advisors and mentors, as well as the insights we gained in our work. Since the beginning of the program, we were able to zero in on a cardiovascular indication for our internal product that will allow us to bring it quickly to a market, which is large, growing and where we have a  strong competitive edge.

“The TMCx program has been a great base to foster the relationships we have been building since we won the Rice Business Plan competition here in Houston in 2014,” he added. “Also, it has been a good outlet to develop new relationships with key stakeholders—from venture capitalists, to surgeons, to potential partners.”

As the day drew to a close, setting the stage for valuable networking opportunities, it became clear that the attendees shared the entrepreneurs’ enthusiasm for their products and saw the potential to send ripples throughout the future landscape of health care.

“The quality of the pitches was exceptional, not only in people’s ability to stand up and deliver, but moreover in the viability of the businesses being created,” said Linda Spain, former chief financial officer of Visualase Inc., a Houston-based company that was acquired by Medtronic last year.

“A number of companies are doing important work and could be hugely successful—thanks to the bringing together of technology, team and the resources TMCx has provided. As an investor, I had never seen so many interesting opportunities at a single event.” For the companies who have pledged everything in pursuit of their passions, that’s a ringing endorsement.