Hacking for a Cure

Hacking for a Cure 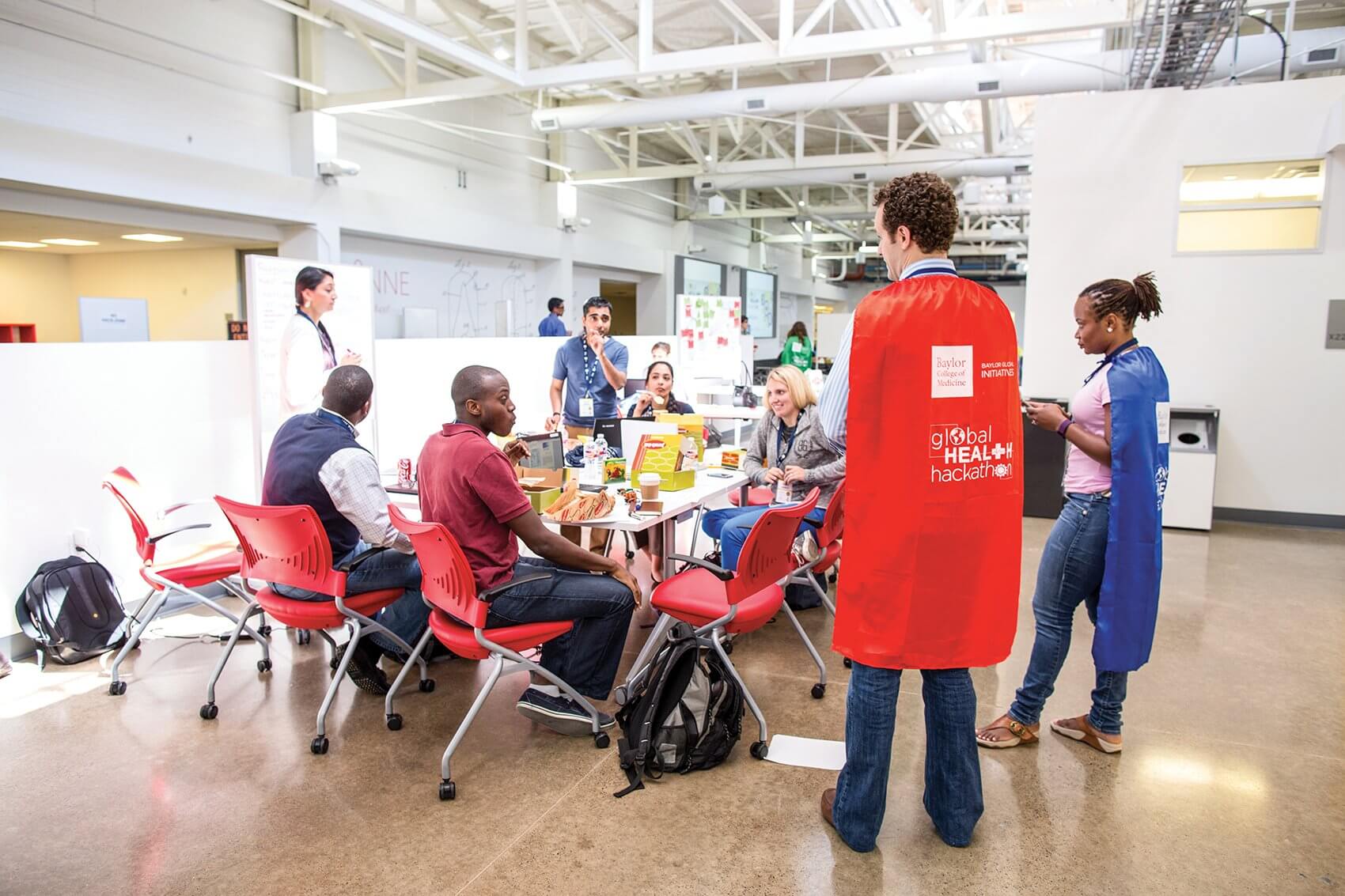 Baylor Global Initiatives has taken a cue from the technology sect to solve some of the challenges facing global health care today. Industry experts were brought in from around the world to mentor a group of innovative students and professionals as they hacked to find solutions for remote medical care during the first ever Baylor College of Medicine Global Health Hackathon at the TMCx accelerator.

For the past year, Baylor Global Initiatives has been working to bring the excitement and innovation of a health care hackathon to the Texas Medical Center. Hackathons began as technology events aimed at hacking software over the course of a few days in a high-energy environment. Instead of hacking software, participants in the Global Health Hackathon were presented real-world challenges by experts in the field and given 24 hours to create viable solutions.

“A hackathon is concentrated energy and concentrated problem solving with a critical group of people in one room for 24 hours,” said Sharmila Anandasabapathy, M.D., director of Baylor Global Initiatives.

The Global Health Hackathon came about when Anandasabapathy and her team at Baylor Global Initiatives decided to tackle challenges in global health with multidisciplinary teams of experts. The Hackathon was an opportunity to impact global health on a larger scale, by utilizing the multi-disciplinary talent in Houston and beyond to attack the multi-faceted problems with a fresh perspective.

The group of over 100 hackers had backgrounds in many different fields, including engineering, health sciences, business management, technology and public health.

The judges, presenters and mentors for the hackathon also had a wide variety of experience. Not only were they from just about every professional field—health care, business, engineering, education, public health, venture capitalists and more—they also had personal experience working in each of the cases presented. They came from all over the world to help the hackers find solutions for problems impacting their lines of work.

“There is an alchemy that comes about when you bring people with different backgrounds together with some constraints,” said Seth Cochran, founder of Operation Fistula and mentor and judge of the Hackathon. “We want to solve this problem and here is what we have to do it. And some really interesting stuff can come out of that.”

The hackers were presented with five cases from industry experts. The challenges included women’s health in rural Malawi, surgical needs in The Gambia, emergency response in an Ebola hot zone, gastrointestinal care and anesthesia in The Gambia and addressing health care needs in perhaps the most remote setting of all: space. The challenges are real and experts in the field need help finding practical solutions that can be readily implemented, cost effective and viable in areas without electricity and infrastructure.

All of the cases presented a multitude of challenges for the hackers. Nearly every aspect of health care in each location is different than health care in the United States—including the lack of electricity, proper training, roads and infrastructure and communication abilities. Because of the complexity of the challenges, the ideal team incorporated members from different fields and backgrounds.

“I am interested in ideas that are very, very different and out of the box,” said Cochran. “What happens when you have people who don’t have a lot of experience is that they come up with something that already exists, but maybe want to use it in a way that hasn’t been done before. And that is where a big impact can be made.”

Once the challenges were presented, hackers had a chance to present one-minute pitches to the group in the hope to form a team around their ideas. After the pitches, 18 teams were formed and had 24 hours to come up with solutions.

“After the pitches are given, the teams form organically,” said Anandasabapathy. “If people feel they can contribute to an idea, they are encouraged to join that team.”

Hackers were provided with a “hack shop” which included a 3-D Doodle machine and MarkerBots (3-D printing machines) and had the help of mentors through the night.

The presenters have been in the field working on the exact cases that were presented to the hackers. They know what has been tried in the area and why solutions will or will not work.

“The mentors walk around and work through the ideas with the hackers, telling them what works and what doesn’t,” said Sarah Michel, senior project manager at Baylor Global Initiatives. “In a normal setting, you do not have access to this much expertise in one room and because of that, we hope to find a concept to turn into a prototype that can help global health on a larger scale.”

After having a full 24 hours to hack away, teams began presenting their ideas and solutions to a panel of judges.

The judges were looking for teams and ideas that could make an impact on public health, innovation, would be an environmental and cultural fit, and would have dissemination impact. Teams were also judged on their final pitch.

Of the 18 teams participating, there were three winners chosen. Healthy Mothers Malawi won third place and $500 with their idea to encourage health care workers to work with traditional healers and educate them on warning signs to promote healthy pregnancies. Red Zone came in second place. Their communications prototype for transmitting patient information from the red zone of an Ebola treatment area to the green zone won them $1,000.

Team Hackascope won first place and the grand prize of $1,500. The team—Andy Zhang, Anuj Marathe, Suganya Karunakaran, Phil Levine, Paul Hausknecht, and Vaidehi Thanawala—chose to find a solution for procedural care in The Gambia where an alarmingly high percentage of the population suffers from Hepatitis B and liver disease. Their prototype, the Hackascope, is a banding device used to stop patients from bleeding to death from esophageal varices. The team made the prototype for under $60, it is easy to use and repair, portable and requires a computer or smart phone for charging.

“This opportunity really spoke to me because providing high-quality, low-cost care is a goal that we all have and it has been a dream of mine to be involved in that realm of health care,” said Phil Levine a gastroenterology fellow at Baylor College of Medicine and member of Hackascope.

In the end, the Hackathon was not intended to be a one-time event. The staff at Baylor Global Initiatives hope to continue working with the teams from the Hackathon and put their ideas to real use.

“I hope that we will stimulate innovation and also leave the weekend with two or three innovative, cost effective, culturally appropriate solutions that we can help develop and implement,” said Anandasabapathy.