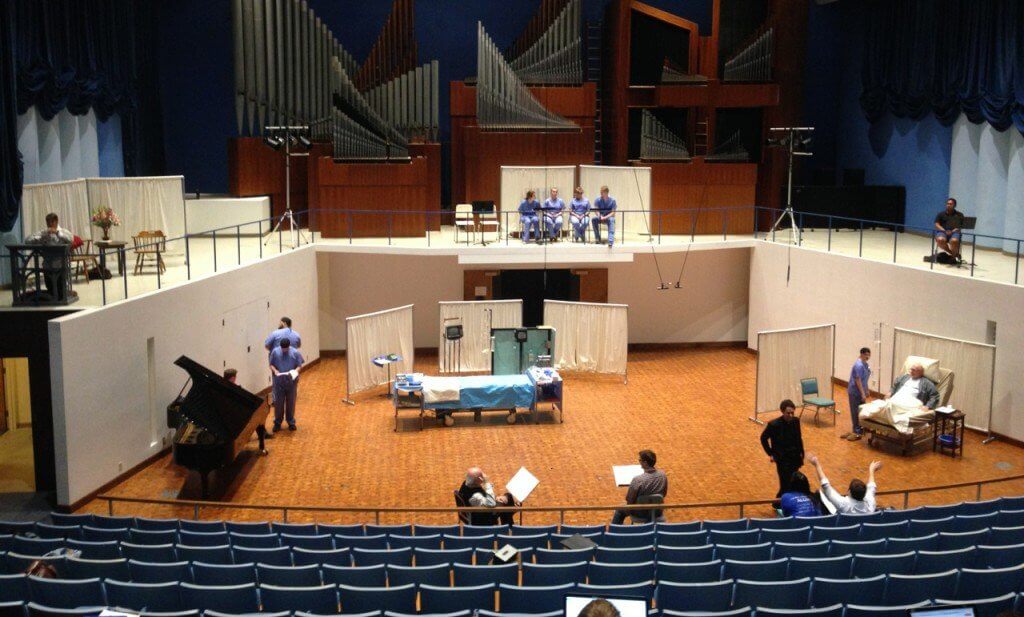 Todd Frazier has been involved in the happenings of the Texas Medical Center since he was a child. His father, O.H. “Bud” Frazier, M.D., has been a heart surgeon in the medical center for over 45 years and Todd has been everywhere with him, from the operating room to his lab.

Today, Todd is the director of the Center for Performing Art Medicine at Houston Methodist Hospital. Because of his exposure to the heart transplant field and his musical background, Todd was inspired to compose an opera documenting the journey heart transplant patients, families and doctors take.

In his youth, Todd met several patients, surgeons, residents and nurses and realized that in order for something like a heart transplant to work, all of these people are forced to take a leap of faith.

“My father performed heart transplants more than anything and that process was inspiring to me because the fact that you can just sew someone’s heart in and bring new life was just incredible to me,” said Todd. “It was a leap of faith, science, anatomy and had a very palpable spiritual side to it.”

The opera, “Breath of Life” tells the stories of those involved in the process of a heart transplant and what they are going through. The story is based around a man who is in need of a heart transplant, though he does not feel that he deserves a new heart and, essentially, a second chance at life. Through receiving a heart, it is obvious that someone else has to lose theirs in a very tragic way. The guilt that many heart transplant recipients feel is not uncommon.

Brian received a heart transplant from Houston Methodist Hospital in 2008 after having heart complications his entire life. When he was diagnosed with congestive heart failure in 2004, he was told he needed a transplant.

“When I was first told I needed a transplant, I was totally against it,” said Brian. “First of all, I have no problem going to join my son [who died in 2000], and secondly, I didn’t want a heart to be taken from someone and given to me that could be used on someone younger than me–obviously if I could trade places with my son today, I would.”

Todd shares the stories of the donor’s family trying to make sense of what has just happened to their daughter and if organ donation is the right thing to do. He also shows a Japanese resident who is struggling with her own spiritual beliefs about taking a heart from a living being and if it will impact her afterlife.

In the second act, there is a moment when the heart has been taken out of the patient and his blood has been stopped to receive the new heart. The donor and the recipient share a moment together that is suspended in time.

“The scene humanizes interface between the two people,” said Todd. “They get to know one another and only in that interaction, the donor charging the patient to live out their life, does the heart start to beat again.”

In the end, everyone has taken a leap of faith to bring new life to not only the patient, but also the donor, because her heart lives on in him.

About 10 years ago, Todd began developing “Breath of Life” in an effort to bring the medical center and the arts community together. In the process he met Gerald Dolter, the Director of Texas Tech music theater.

After years of collaboration, Todd and Dolter were able to bring “Breath of Life” to Texas Tech. The opera was performed twice this September.

“My hope with the opera was to bring this extraordinary story of advancements in science and the human condition being challenged out of the medical center and bring it to the general public,” said Todd. We hope to bring “Breath of Life” to more cities to bring the arts and science communities together and I would certainly love to have it here in Houston,” said Todd.