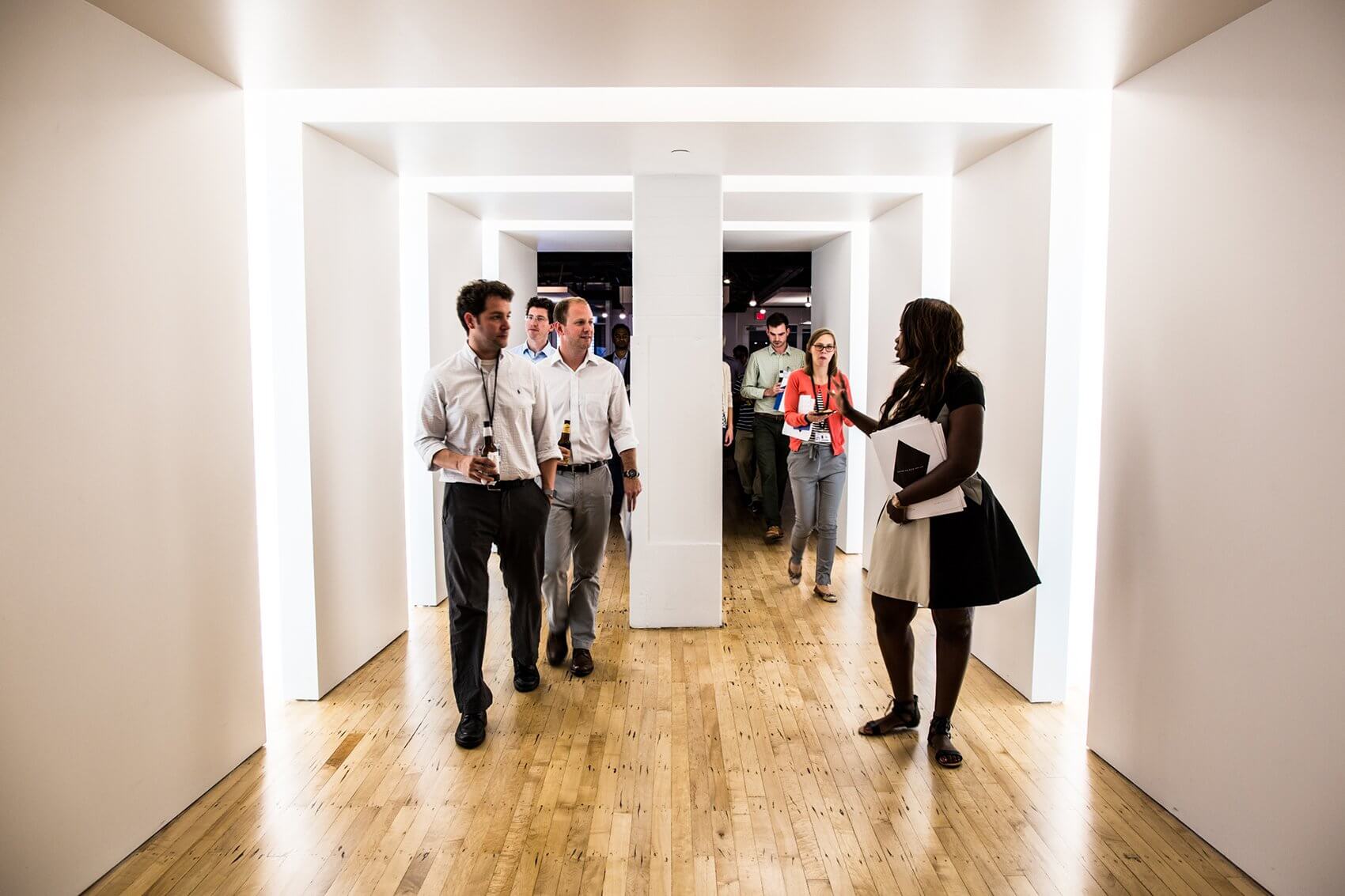 From finding kindred spirits in a new city to realizing you aren’t the only one who decided to take a course in 13th century medieval history, it’s always affirming knowing that you aren’t going through an experience alone. For the fellows in the inaugural class of TMC Biodesign—the Texas Medical Center’s one-year innovation fellowship that brings together talented individuals from diverse backgrounds—the opportunity to meet and mingle with the fellows from this year’s Stanford Biodesign Innovation Fellowship provided just that validation. On Tuesday, Oct. 6, the two teams came together at TMCx to share their stories, enjoy a few drinks and learn from each other’s experiences during the needs-finding process.

“It was a really incredible experience for our fellows here,” said Sandeep Burugupalli, a business analyst at TMCx who helped develop and launch TMC Biodesign. “They meet very few people who are going through the exact same process, and for them it was a way to see if they were on similar tracks throughout their respective programs. Even though all of our fellows came in knowing that our program is modeled after Stanford, it was valuable to have the ability to establish new contacts and interact with others about the process of biodesign.”

While the foundational model remains the same between the two programs—identify, invent and implement—some subtle differences emerged throughout the course of the evening.

“I didn’t know that there was a biodesign program out here, so that was incredibly exciting to discover,” said Verinique Pfiefer, a Stanford Biodesign fellow. “While this program is still in the first year, that opens up a whole host of opportunities, as you’re starting from scratch and trying to figure out the best way to do things.

“At the same time, there is some guidance with what’s worked for us at Stanford, and it’s great to hear that there’s such a different approach here,” she added. “Instead of having a completely separate phase dedicated to learning and a separate needs-screening phase, which is the way that we do it, everything is a bit more blended here. It will be interesting to see what the observations will be like and how they differ from what’s been discovered at Stanford.”

The fortuitous meeting that brought a little bit of the West Coast to Houston was an outgrowth of a longstanding peer relationship between Stanford Children’s Health and Texas Children’s Hospital maternal fetal medicine surgeons. Together, they’re looking at how to solve some of the harder-to-reach problems in minimally invasive and in-utero surgery.

“The Stanford Biodesign program is tied into a lot of their efforts, so those are resources that we’re engaging,” noted James Hury, director of financial services at Texas Children’s Hospital. “The fellows are here for four days, and in that time they’ve been meeting with our surgeons and department heads specializing in reproductive health, maternal fetal medicine, and labor and delivery, really hoping to identify areas of opportunity along that spectrum.

“The sharing process is a learning process,” he added. “We show them all of our pain points, they look for the best opportunity areas, and we work together to build those points into the future. We also get a glimpse of their process, and at the end of the day, we all look at the same thing as many of the biodesign fellows. It’s all about trying to prioritize problems.”