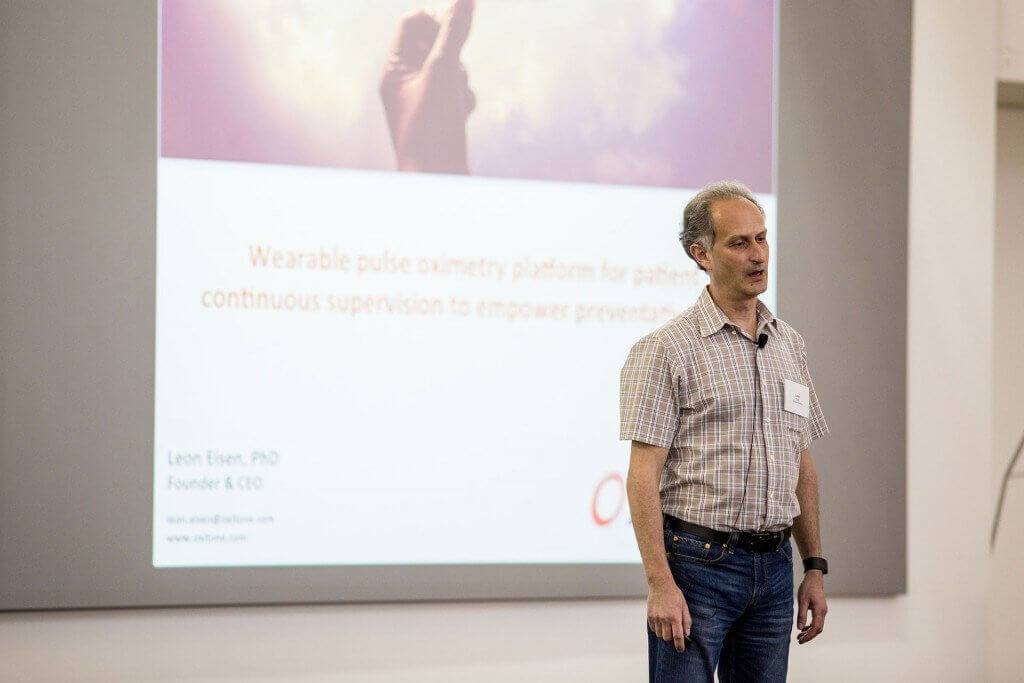 In hospitals around the country, patients are fastened to banks of monitoring equipment, trailing them around like incessantly beeping balls-and-chains as wires protrude awkwardly and vitals are registered. At home, they fumble with fingertip sensors and other bulky monitors that require the user to wear them at all times—a visceral, constant reminder of their illness that projects their condition to the outside world.

Compounding that feeling of entrapment is a frustrating dissatisfaction with the technology itself. Some vital signs, such as the level of oxygen in the blood—detected by a device called a pulse oximeter—can only be registered when worn at specific body sites, such as the fingertips, leading to episodic measurements. As Baby Boomers become Medicare beneficiaries and aging Americans worry about unexpected complications due to their potentially deteriorating health, the demand for non-invasive, consistent monitoring devices is at an all-time high.

“After investigating the current market situation, we found that while oxygen circulation was being monitored continuously in the hospital, it was an incredibly uncomfortable experience for the patient,” reflected Leon Eisen, Ph.D., founder and chief executive officer of Oxitone Medical, an Israel-based company that is looking to expand to the United States. “At home, people are only capable of having episodic measurements using spot-check monitoring, which doesn’t provide continuous measurement for oxygen circulation. People can’t wear the fingertip sensor all the time, it’s just impossible—it’s not comfortable and falls off your finger too easily. Nobody knew how to measure continuously blood circulation, so we decided it was time to move forward.”

That realization spurred the development of the Oxitone watch—a wrist-worn, medical-grade pulse oximeter that continuously, remotely measures and transmits a person’s oxygen saturation, heart rate and respiratory rate. Eliminating the need for an irritating fingertip sensor or chest strap, all of the sensors are embedded into a stylish, watch-like enclosure.

“Our technology is based on a unique approach to the measurement and analysis of blood circulation,” noted Eisen. “Based on my experience as a researcher and engineer, I understood that conventional pulse oximetery technology—when applied to the wrist—doesn’t work properly because of very motile and complex anatomic structures. That structure influences all parameters, so even if there is a signal being generated, there won’t be enough energy to deliver proper information to the detector.”

Unlike current monitoring equipment that is applicable at a limited number of body sites—those characterized by high blood perfusion, such as the fingers, ear lobes and nose—Oxitone’s approach utilizes patented pulse oximetry sensors, which detect the same amount of physiological information at the wrist as conventional fingertip probes. According to Eisen, an intelligent algorithm identifies and processes the optical information, enabling it to track a patient’s vitals with conventional precision.

Eisen is well-acquainted with the importance of post discharge continuous monitoring. The catalyst for his idea was generated by an abrupt family tragedy: his father collapsed on the street from a heart attack only three hours after being released from the hospital.

“I came to understand how essential it is to measure oxygenation rates and other vital signs continuously,” reflected Eisen. “My father collapsed three hours after being discharged. I called the doctor and he actually asked me what happened. I got frustrated and replied, ‘You tell me what happened! You saw my father three hours ago—you don’t know?’ He told me that he didn’t have any data on my father’s vitals. I kept talking to people and emphasizing that we have to build some medical device that can provide continuous monitoring of patients, so we can gather and analyze data in real time.”

Using his device, physicians will be able to observe a patient’s key vital signs remotely, recognizing any potential problems before they occur. In addition, Eisen incorporated an emergency alert into his device, automatically warning caregivers of a possible emergency and paving the way for preventive measures to be taken.

“When I’m looking for commercialization opportunities, I make sure to promote in the medical market, emphasizing the fact that we’re a medical device that provides continuous monitoring,” said Eisen, clarifying that while his technology shares the stylish flair of wearables like Fitbit, it’s capabilities extend far beyond that. “They don’t have to look like medical devices—they should look like wellness devices because critically ill people are human beings like all of us. They just want to look good.

“Wearable devices are the future of monitoring health,” he added. “I think, in the years ahead, they’ll dramatically reduce the cost of health care.”