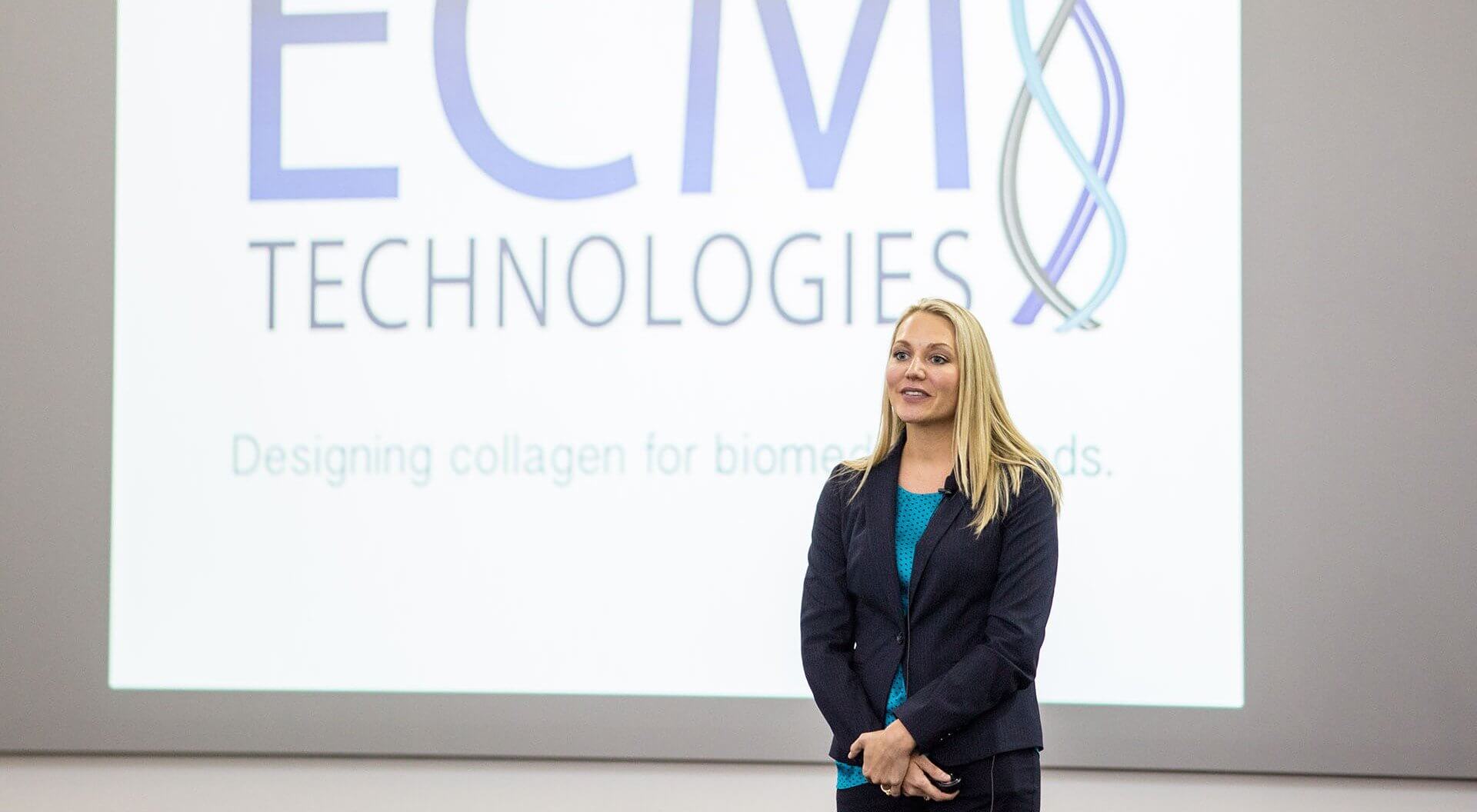 What do you get when you combine around 1,000 amino acids, a unique triple helix configuration and a sequence consisting of glycine, proline and hydroxyproline? The most common protein found in the human body, collagen is the substance that binds everything together—tethering bones, muscles, skin and tendons, where it forms a scaffold that supplies strength and structure. In addition to the body’s naturally produced connective tissue, supplemental collagen has a wide range of medical applications due to the way it directs cells and tissues. While many of us are reluctant to peer behind the curtain, the majority of medical collagens in use today originate from a source that can’t always put a premium on consistency.

“Animal collagen is basically a slaughterhouse by-product,” said Brooke Russell, Ph.D., vice president of ECM Technologies, as well as assistant professor at the Center for Infectious and Inflammatory Diseases at Texas A&M Health Science Center Houston (TAMHSC). “There are differences that emerge between different batches of collagen—animals may produce collagen differently, so you’re not really getting something consistent from batch to batch. Also, you have the inherent risk of disease transmission associated with it.”

Rather than continue to modify animal proteins, Russell and her colleagues did what they do best—hit the lab. Based out of Texas A&M University, ECM Technologies utilizes proteins derived from bacteria as a platform to design collagens for biomedical needs. Appropriately dubbed ‘designer collagens,’ these proteins can be genetically customized, with instructive cues tailored to specific applications.

“Designer collagen is made in a laboratory—it’s pretty similar to the way that insulin is produced,” explained Russell. “Because we’re not starting with anything that has disease risks associated with it, that part is completely neutralized. It’s consistent from batch to batch, we’re able to conduct experiments to check the purity and consistency, and we can customize every single piece of it. We have complete control over the entire product, which is something that’s not available when you’re using an animal collagen.”

According to Russell, ECM’s primary focus is on developing a designer collagen wound dressing—thanks to the protein’s capacity to attract new skin cells to the wound site, promote healing and provide a scaffold for new tissue growth.

“We’re addressing the chronic wound care market because a significant number of wounds never close, eventually leading to amputation,” said Russell. “The market is crowded with various products, but the emergence of innovative, new technologies is still limited. We hope that our designer collagen can help these wounds close faster.”

With a team that consists of Magnus Hook, Ph.D., founder and president of ECM, as well as director of the Center for Infectious and Inflammatory Diseases, Russell, and Elizabeth Cosgriff-Hernandez, Ph.D., also an associate professor at Texas A&M University, ECM Technologies is firmly embedded in the A&M system. Bolstered by an academic mindset and a commitment to rigorous, thorough research, ECM has a wealth of expertise to draw from.

“[Hook’s] laboratory at Texas A&M has a long history in studying the surface proteins of bacteria,” reflected Russell. “Bacteria are really nifty—they mimic a lot of human proteins. And so the computer, based on the sequencing of designer collagen, identified a bacterium as a collagen, and we helped verify that using biochemistry. It was the first time that had happened. The idea of giving human-like properties to the bacterial collagen came from my boss, who said, ‘Well, maybe we can put some sequences within the collagen and use it for something good instead of letting the bacteria have all the fun infecting us.’ We wanted to take that and use it to our advantage.”

For Russell and her team, that emphasis on scientific rigor and due-diligence might not give them the speediest path to commercialization—but it will ensure that once they get there, all of the kinks have been ironed out.

“Typically, biotech companies sort of get a bad rep,” noted Russell. “Timelines and budgetary pressures force them to roll the dice on a project, and then it fails clinical trials, and nobody knows where to go from there. I think our academic background and focus on non-dilutive funding helps us a lot, though.

“By moving a little bit slower, we think we’ll have a better chance of being successful because we’ll know more about our product as we’re moving it out there,” she added. “Hopefully, we’d be able to mitigate any problems that could come up with the product before they actually happen.”

As ECM looks to the horizon, Russell hopes to expand their product offerings. While their current clinical aim addresses the chronic wound care market, she sees that as just the beginning.

“Hopefully, we’ll have an FDA-approved designer collagen wound dressing within three years,” she concluded. “We see this as a jumping off point to demonstrate the advantages of designer collagen, and it will also open the door for us to pursue other areas of interest, such as bone grafts and adhesion prevention. The clinicians that we’ve spoken to are all incredibly excided about what we’re developing.”