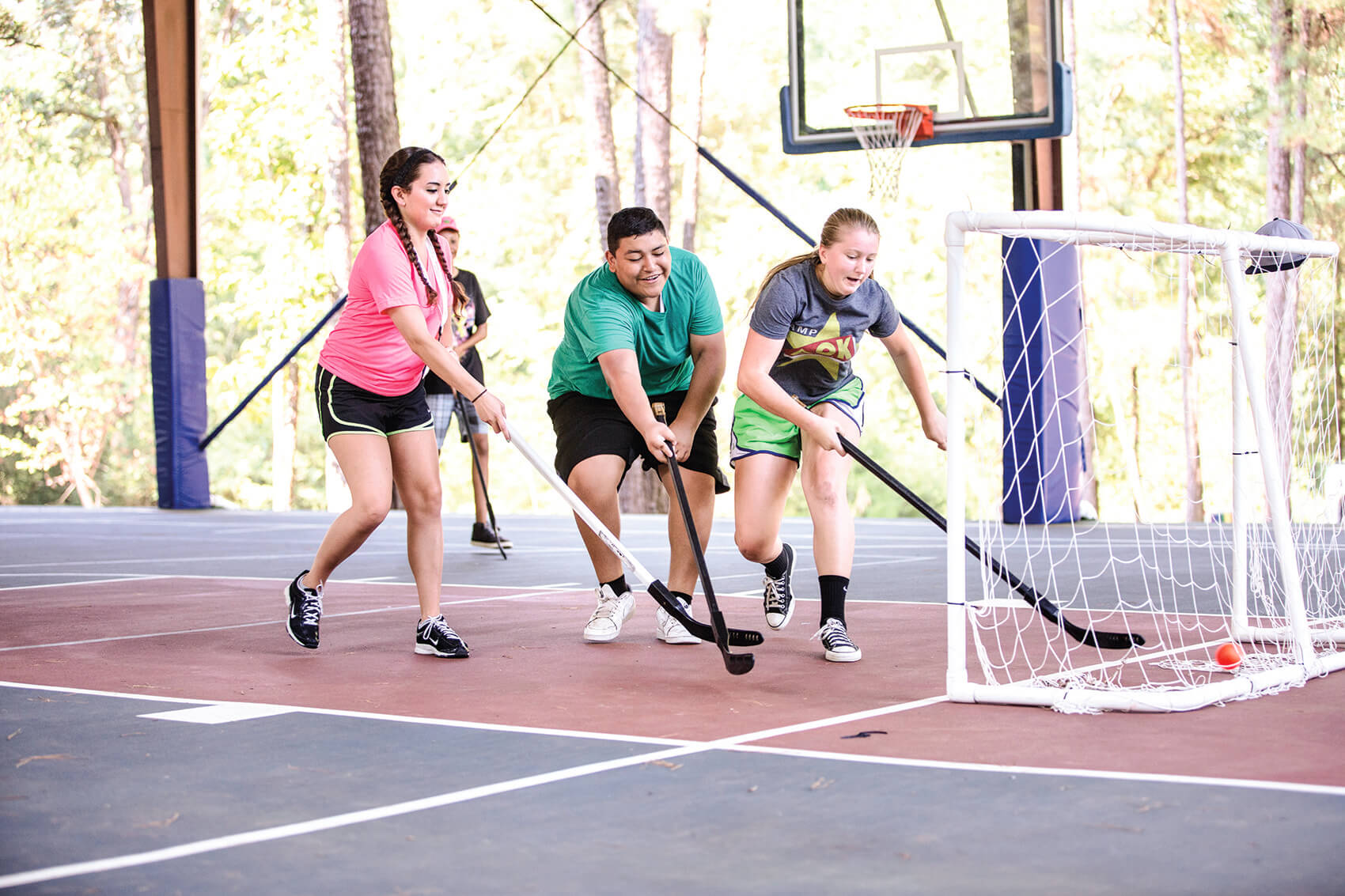 Every day, employees and volunteers at MD Anderson Children’s Cancer Hospital wake up focused on their mission: Making Cancer History. But underlying their fight for a cure is another calling—one focused less on the disease itself and more on the patients within their hospital’s walls.

“Our job is to help support these patients and their families through some of the worst times of their lives,” said Lauren Shinn, program manager for the division of pediatrics at MD Anderson Children’s Cancer Hospital. “I always think if I can make just one aspect of their whole treatment process a little bit better, then it’s all worth it.”

It’s a charge the staff doesn’t take lightly. In addition to coordinating celebrity appearances, an education and creative arts program, pet therapy visits, yoga classes and more, the hospital also offers annual off-site summer camps for patients as well as their siblings, an often overlooked group. This past August, a group of 48 teens were bused to a private campground outside Magnolia, Texas, to take part in Camp A.O.K.

Free to attendees through donations to the hospital and staffed by MD Anderson employees, volunteers, physicians, and nurses, A.O.K., which stands for Anderson’s Older Kids, is a five-day overnight camp that offers patients ages 13 to 18 a break from the world of white coats and hospital rooms, without interrupting their treatment.

“Oftentimes, children with cancer aren’t able to do normal things that their peers are able to do, like go to camps, go to school, even interact in public spaces like the mall because the treatment they receive makes them susceptible to getting sick,” said Shinn. “By bringing MD Anderson to camp, we ensure their treatment stays on course, while allowing kids a chance to be kids.”

Aside from the on-site health clinic and a very low counselor-to-camper ratio (35 staff to 48 campers), A.O.K. is structured just like any other camp. The teens stay in cabins with their counselors and engage in activities offered throughout the day, including canoeing, fishing, archery, horseback riding, tennis, field hockey, swimming, cooking, arts and crafts with MD Anderson’s Children’s Art Project, and more. Each teen is able to choose their daily schedule based on personal preferences, a deliberate move to help foster independence and autonomy, which is something a lot of teens with cancer miss experiencing due to the constraints of their treatment.

“Many of our patients spend such a large majority of their time in the hospital relying on staff or their parents,” explained Michael Rytting, M.D., pediatric oncologist at MD Anderson Children’s Cancer Hospital and one of the camp physicians for over 20 years. “I think probably the most specific benefit of this camp is the independence and confidence we foster in these young patients.”

In fact, one of the daily activities offered to the campers is something called “Expression Session,” which focuses specifically on the dynamics of independence. Facilitated by a member of MD Anderson’s Child Life team, this year’s hour-long class, titled “Birds of a Feather,” provided each camper the opportunity to craft a bird representative of him or herself. The birds were then placed into nests grouped by cabin, while the Child Life specialist explained how birds in the wild were not so different from the campers themselves.

“It’s a really unique hands-on opportunity for the teens to grasp everything they’re going through, and also what lies ahead,” explained Shinn.

“Birds are there in the nest to support each other, just like our campers, but birds also have to go out on their own and leave their nest for the very first time. A lot of our campers are 18 and becoming adults, and so addressing their hopes and concerns with peers dealing with similar issues is very powerful.”

Shinn noted that for teens with cancer, the challenge of gaining independence is compounded by the fact that the experience of cancer itself can be extremely isolating.

“One of the reasons MD Anderson initiated these camps over 30 years ago was to help create opportunities for our patients to interact with other kids who are going through the same thing. It provides them a chance to be around their peers who have cancer, and to be around brothers or sisters who have brothers and sisters who have cancer. Out here, they’re not the main person who has cancer, so they don’t feel so isolated or like everybody’s looking at them. Out here, everybody’s the same.”

“I’ve made a bunch of new friends, which is awesome,” said Alyssa, a 13-year-old first-time camper. “The fact that we all have something in common is cool, too. I have a port and sometimes it shows, but I don’t have to be embarrassed here because everyone’s just kind of used to it.”

Nurturing friendships alongside independence, the entire camp convenes for meals at the dining hall, where many of the fresh fruits and vegetables served come from an on-site garden. In the evenings after dinner, the campers participate in a group activity, which ranges from off-site bowling to a casino night to a “dive-in” movie in which campers enjoy swimming while classics
like “The Sandlot” are projected on a screen nearby.

Predictably, the most popular of the team activities is the annual prom. Held towards the end of the week, each camper selects his or her attire from a large selection of donated tuxes and dresses on the first day of camp, so the formalwear can be shipped off-site for alterations and dry cleaning before the big event. On the day of, scheduled afternoon sessions are substituted for primping and prepping—all made possible by generous donations and local volunteers. This year, stylists from area salons The Mane House, Hair by Jada, and Vintage Park Salon Boutique provided haircuts for the boys and up-dos for the girls. Kendra Scott’s Mobile Color Bar travelled on-site to make customized jewelry, and Home Depot set up a “man cave” so the boys could complete small woodworking projects while the girls finished their makeup and nails. At 6 p.m., after at least 30 minutes of selfies and pre-dance group photos, the campers filed into buses headed for The Woodlands Resort and Conference Center. In a ballroom decked out with balloons, streamers, and a prop-filled photo booth, the teens enjoyed a gourmet Italian buffet before hitting the dance floor for hours on end.

“Going to prom is such an important milestone for teens,” said Shinn. “Thanks to the generosity of the community, we’ve really been able to make this a special event, and you can tell our patients love it. A lot of times, teens with cancer have body changes due to their treatment, so this is a time for them to not really think about how their body might be different, but rather a time to think about how their body is still beautiful and still important and how they can still feel special.”

Like camp, it’s also a time for the patients to enjoy just being the teens that they are, because in the end, they’re still just a group of kids—albeit undeniably special ones. Alyssa is a case in point. After undergoing over 17 months of treatment for her disease only to find out she had relapsed, Alyssa chose to build a water well in Zimbabwe when the Make-A-Wish Foundation offered to fulfill her heart’s desire.

“For her to pick something so unique that would benefit so many people, it was truly selfless,” said Shinn. “Looking from the outside in, you might think that she would be angry or frustrated with the situation she’s in. But instead, she wanted to help other people who were struggling. It’s really inspiring.”

On this Thursday evening in mid-August, with 47 other equally inspiring teens crowded into a ballroom, none of their usual challenges mattered—not their cancer, not their courage, not their endlessly positive attitudes—that evening was about dancing the Cupid Shuffle and the Cha Cha Slide, about sporting temporary tattoos and photo-booth props, about feeling handsome and beautiful and silly while making memories and friends they’d never forget. That evening was all about prom.