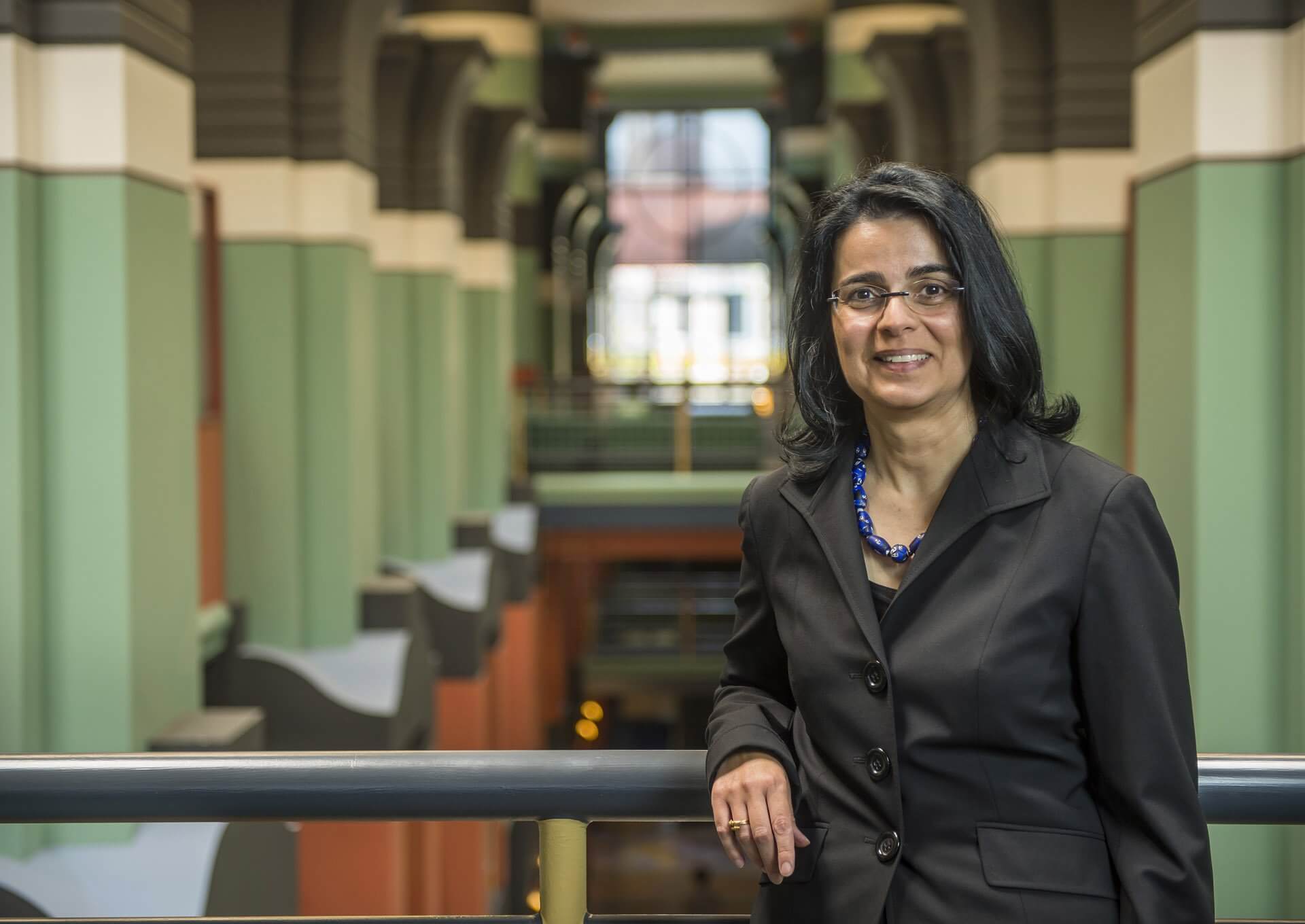 Lydia Kavraki, Rice’s Noah Harding Professor of Computer Science and a professor of bioengineering, has been named the winner of the 2015 Award for Technical Leadership by the Anita Borg Institute.

The institute, which promotes the progress of women in technology, will present the award to Kavraki at the 2015 Grace Hopper Celebration of Women in Computing. Rice is a gold academic sponsor of the Oct. 14-16 event, which will bring 12,000 women technologists to Houston’s George R. Brown Convention Center.

The award recognizes women who demonstrate leadership through contributions and achievements that raise the impact of women on technology.

Kavraki, who joined Rice in 1996, continues to push the boundaries of fundamental computer science, but with her own agenda. While she and her Rice students tackle specific problems in both robotics and biomedical sciences, she wants each solution to address a bigger picture.

“We try to connect our work with current applications,” she said. “My students enjoy working on applications, but they also gain a lot by understanding that we need to develop fundamental computational methodologies for us to be able to tackle larger problems.

“I don’t want ad-hoc solutions for each application. I want principled frameworks for solving problems that are relevant to our lives.”

Kavraki speaks from experience. She is known for her invention of a motion-planning algorithm known as a probabilistic roadmap, a fundamental contribution to robotic science. It allows robots to efficiently plan and carry out sophisticated movements such as those required by articulated manipulators.

Her work set the benchmark against which progress in the field is now measured and led to her group’s more recent development of the Open Motion Planning Library, which she said is now in common use by robotics and bioinformatics labs in industry and academia.

The work also led Kavraki and her team to look skyward. A current project is to compute motion plans for Robonaut, NASA’s humanoid robot, which now resides at the International Space Station.

“The goal for this robot is to help astronauts with mundane tasks,” she said. “For example, I was surprised to learn that astronauts have to spend an awful lot of time disinfecting the handrails and measuring air quality. These are tasks that can be done by a robot, and it would also be very nice to have the robot set up experiments for astronauts to execute. Their time is pretty precious.”

She said the fact that Robonaut must always be attached to a handrail requires complicated motion control. “You don’t want it floating around,” Kavraki said. “By having the robot grasp a sequence of handrails at ISS, the robot can move close, let’s say, to an air vent to check the quality of the air. My students are excited to be working on this.”

Programming robots led Kavraki to think about the shapes and motions of much tinier “machines”: proteins. She and her students are creating algorithms to characterize protein shape and function for structural computational biology applications such as drug design. Their work is most interesting for its application to the analysis of large molecules, she said.

The ability to work small and think big makes the Rice group a valuable partner. “We have very good collaborations within computer science (at Rice),” Kavraki said. “We also work closely with Baylor (College of Medicine), MD Anderson (Cancer Center) and researchers who are not in Houston but who share our passion for developing novel methods for physical problems. I’ve been very fortunate to have good collaborators.”

Kavraki received early recognition when she won the Association for Computer Machinery’s (ACM) Grace Murray Hopper Award in 2000. She is a member of the National Academy of Medicine and a fellow of ACM, the Institute of Electrical and Electronics Engineers, the American Association for the Advancement of Science, the Association for the Advancement of Artificial Intelligence, the American Institute for Medical and Biological Engineering and the World Technology Network. She was named one of the Brilliant 10 for 2002 by Popular Science magazine. She is also faculty mentor to Rice’s Undergraduate Women in Computer Science Club.

Both the earlier award and the upcoming Houston conference are named for Rear Adm. Grace Hopper, a computer pioneer who invented the first compiler for a programming language. She helped popularize the idea of machine-independent languages, which allow programmers to work in plain text rather than binary numbers and led to the creation of COBOL, one of the first widespread computer languages.