Explorers of the Heart

For 60 years, the Texas Children’s Hospital Heart Center has been a pioneer in improving the lives of pediatric heart patients

Explorers of the Heart 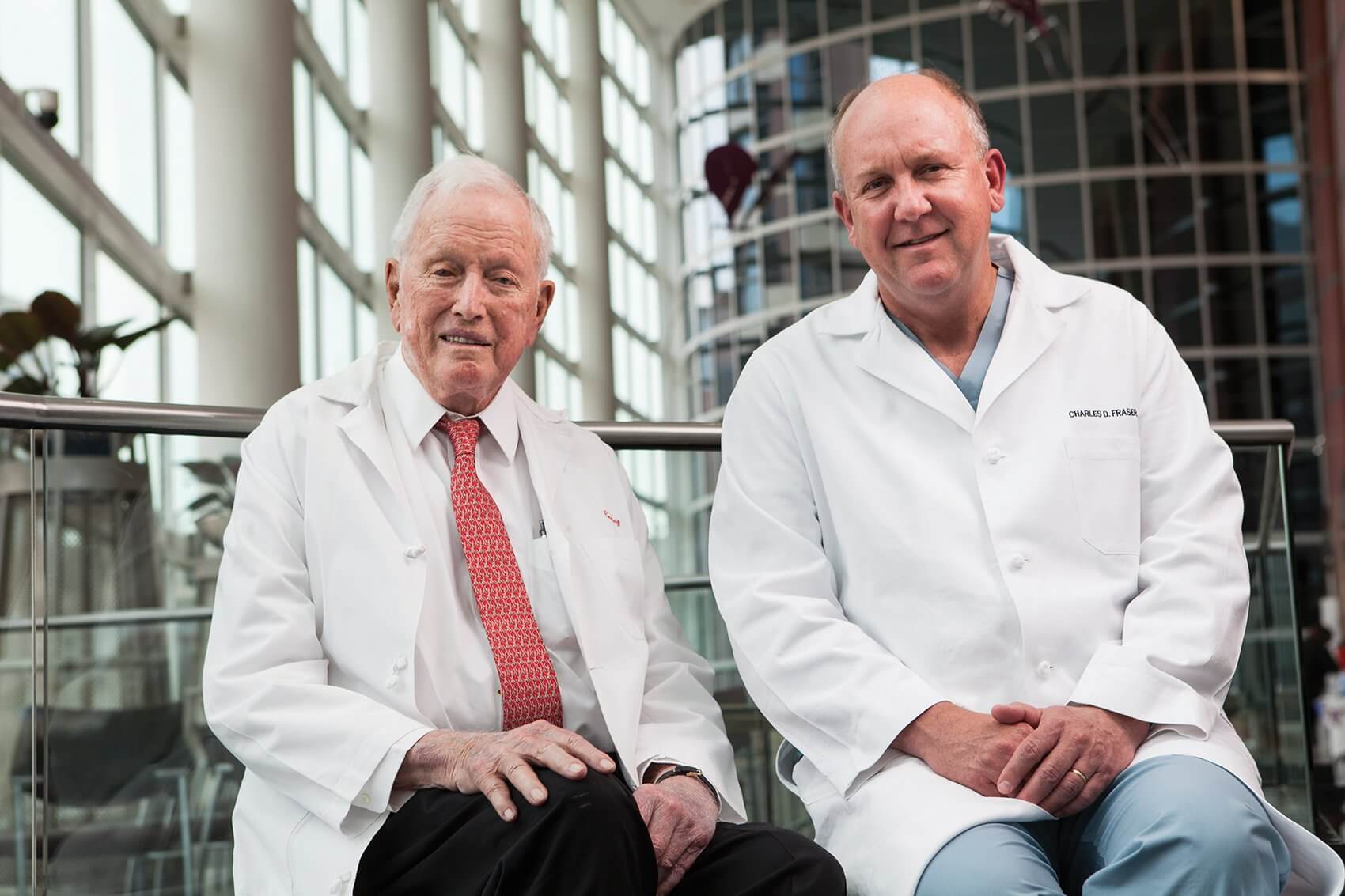 The heart has always been a fascinating organ in the body. It is one of the only organs that constantly has a visible action to it. You can feel your heart beat here, if you put your hand under your left breast. It has enjoyed sort of mystical or even romantic significance. — Denton A. Cooley, M.D., Founder of the Texas Heart Institute

The Texas Children’s Hospital Heart Center is one of the most active pediatric heart programs in the United States, setting a record with 32 heart transplants in 2014. The Heart Center consistently treats the most complex heart issues, including atrial septal defects, ventricular septal defects, tetralogy of Fallot and transposition of the great arteries. Pioneered by legendary heart surgeon Denton A. Cooley, M.D., founder of Texas Heart Institute, the program is now led by Cooley’s son-in-law, Charles D. Fraser, M.D., Texas Children’s surgeon-in-chief and professor of surgery and pediatrics at Baylor College of Medicine. Over the past 60 years, the pediatric heart program has grown from a small group of physicians navigating unknown territory, to one of the leading pediatric heart programs in the world.

When Texas Children’s Hospital opened its doors in 1954, the very idea of specializing in cardiology or heart surgery in adults was a new concept, let alone operating on the hearts of children and infants.

“When Dr. Cooley was getting started, there wasn’t even such a thing as a heart surgeon. He was a surgeon,” said Fraser. “He was a surgeon who operated on the stomach, the gallbladder, the thyroid, the lung, the esophagus and, oh, by the way, also the heart.”

From the beginning of Cooley’s medical training, however, the heart piqued his interest, in part because it was largely unexplored. For most of human history, the heart had been untouchable, considered too mysterious and sacred for man to interfere.

“When I was a medical student, it was an organ that was not to be operated upon,” said Cooley. “You could operate on any other organ in the body except for the heart, the ‘touch-me-not’ organ.”

Cooley was not deterred. The attitude held towards the heart felt more like a challenge than a roadblock. As an intern at Johns Hopkins in Baltimore, Maryland, he assisted Alfred Blalock, M.D., in the first “blue baby” operation, named for the cyanotic, or blue, skin discoloration caused by a congenital heart defect. Soon they were performing numerous blue baby procedures. Doctors around the world traveled to Johns Hopkins to learn how to perform the operation, known as the Blalock-Taussig Shunt, and Cooley got his first taste of making medical history.

Just a few years later, in 1951, Cooley arrived back in his hometown of Houston. He was ready to implement the advancements he had seen at Johns Hopkins and the Royal Brompton Hospital in London, and eager to blaze new trails in heart surgery. By 1954, he was facilitating the beginnings of pediatric heart surgery at Texas Children’s. In those days, the prognosis for infants with heart defects was grim and parents had few options.

“The type of patient they were taking on during that era—they were critically ill, fragile, disabled children who didn’t have any hope of meaningful survival,” said Fraser, who just recently celebrated his 20-year anniversary leading the Heart Center. “Texas Children’s was one of the birthplaces of pediatric cardiac care under this visionary pioneering. It was just them taking on the problems and figuring out ways to fix them.”

“Very soon we had a rather simple device by comparison to other institutions, which made it possible for us to do a large quantity of open heart surgeries—10 times what was done by any other institution in the country,” said Cooley. “We had the opportunity with our pump oxygenator to be like explorers. I used to compare it to the space exploration going on in Houston at that time. We were known for our exploration of the heart.”

Soon doctors were traveling great distances, packing into operating rooms by the dozen to observe the groundbreaking work being done at Texas Children’s.

“They got started at a time when no one thought you could even do this. You couldn’t even take these problems on,” said Fraser. “People were coming here from all over the world. They couldn’t believe this was actually happening.”

Despite its rapidly growing fame, the Texas Children’s program was not without critics. Detractors said it made no sense, it was too costly to spend so much effort and so many resources on a narrow focus.

“The learned people of the era thought the idea of having a machine to support the circulation so you could operate inside the heart was craziness,” said Fraser. “People get comfortable with what they do. But it turned out it was the right thing to do.”

Those early days of tackling problems no one had dared to touch were tremendously risky for the team at Texas Children’s. There was no precedent to follow when transplanting a heart in a child, for example. How would the transplanted heart respond to the anti-rejection drugs? What effect would the drugs have on the child’s future growth? What kind of quality of life would the child have?

“It had to begin somewhere and it took a certain amount of courage to undertake those operations for the first time,” said Cooley. “I put my reputation on the line.”

The gamble paid off. The program has now performed more than 27,000 cardiac operations since its inception. Building upon the discoveries made by Cooley and his early team, the Texas Children’s Heart Center continues to push boundaries. Since Fraser’s arrival in 1995, the center has focused on increasingly complex repair work, particularly in newborns and premature infants. Fraser himself performed the smallest arterial switch operation ever reported on a baby girl weighing less than two pounds.

A large part of the success of the Texas Children’s pediatric heart program, Fraser noted, is the growth and advancement of Texas Children’s Hospital as a whole. In 1954, when the hospital opened, the medical field had not even fully embraced the idea of specialty pediatric care. The hospital has now grown from just over 100 beds at its start to nearly 550, and performs between 900 and 950 pediatric heart operations per year.

“We have a tremendous breadth of expertise in pediatrics at Texas Children’s. Neonatology, nephrology, neurology, anesthesiology—all the things that go into the care of small children,” said Fraser. “The specialties have grown up around us, and I can’t ultimately be successful with a small baby without this whole focused interest on the children. That could hardly have been envisioned 60 years ago.”

Looking forward, Fraser said his team will continue to refine their techniques and focus on smaller and smaller children. Texas Children’s has now entered the realm of fetal surgery at the Texas Children’s Fetal Center, operating on fetuses inside their mothers. Fetal diagnostics have also essentially become commonplace at the hospital. Many of the patients cared for postnatally are diagnosed before even birth.

“In the realm of specific therapies, we’re working closely with Texas Heart Institute on forms of mechanical circulatory support,” said Fraser. “We’re working with them right now, as we speak, on a very small miniaturized heart pump to support the circulation of small children, much like what exists pretty routinely in adult medicine. That’s really exciting.”

Fraser and Cooley emphasized the importance of the partnership between Texas Children’s and Texas Heart Institute, which Cooley chartered in 1962. For nearly 45 years, the two institutions have worked closely as they achieved numerous successes.

“The history has been proof of concept in the larger patients and then it gradually gets refined in the smaller patients. That’s why our relationship between Texas Heart and Texas Children’s is so effective and so critical,” said Fraser. “We can’t do these things in isolation. We’re not going to recreate 60 years of history; we need to build on it. Essentially, in that heritage, we’re one and the same.”

Building on that legacy set in motion by Cooley and his colleagues 60 years ago is vital to the continued success of Texas Children’s Hospital and the Texas Heart Institute, as well as future advances in pediatric heart surgery and treatment. Cooley said he “could not have conceived” the level to which Texas Children’s has grown since 1954, and yet the growth continues.

“We got it started here, we’ve kept it going here and, working together, we can continue to move the field forward,” said Fraser. “This is a place that has had unparalleled history and has an unparalleled opportunity going forward.”