Dr. Charles A. Berry Collection offers a look back at America’s early days in space 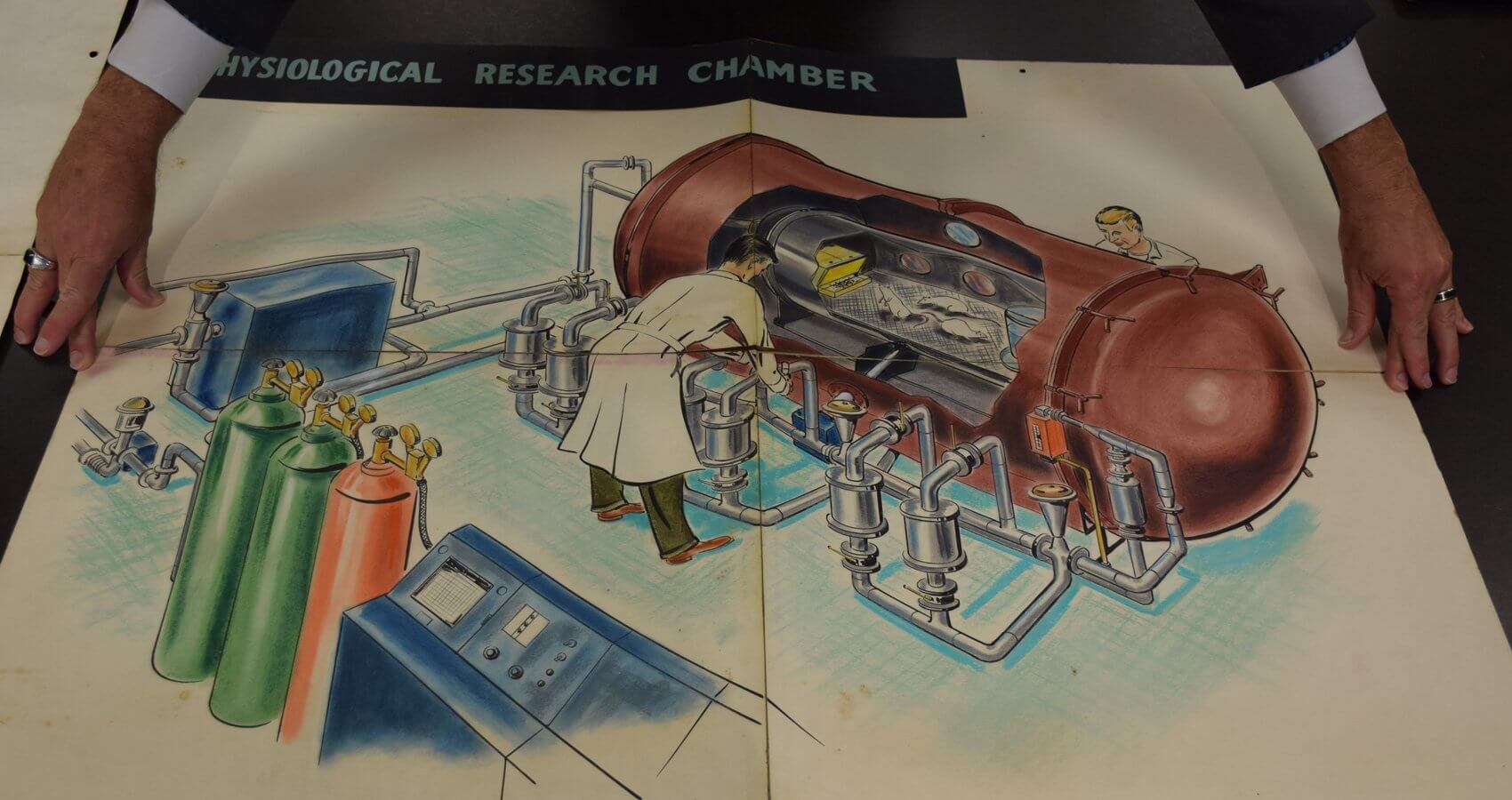 NASA recently celebrated the 50th anniversary of Houston’s Mission Control at the Johnson Space Center, which has been involved with spaceflights since the beginning of the program. As a new era of commercial space travel approaches, the archives of the University of Texas Medical Branch at Galveston offer an intriguing look at America’s early space program.

The development and success of the nation’s space program is due to the work of early pioneers dating back to the 1950s. An extensive collection of papers, magazines and articles chronicling the development of space travel and medicine is in the Moody Medical Library’s Charles A. Berry, M.D., Space Medicine Collection.

Berry was UTMB’s first chair of aerospace medicine in 1967. He also served as director of medical operations and research at the Manned Spacecraft Center during the Gemini and Apollo programs.

The Berry Collection of memorabilia is a treasure trove of rare items that illustrate just how dynamic the development of America’s space program was at the time.

UTMB archivist Robert Marlin said, “We are thrilled to have this collection of historical documents from the formative years of the country’s space program.” He thanked Dr. Berry for the donation and said he hoped that the collection “continues to grow and reflect the quality of person that he has been throughout his aerospace career.”

Berry, 91, recently agreed to share his experiences, and explain why he believes it is important that historical documents related to the development of aerospace medicine and space exploration be preserved.

Berry pursued a medical degree via the United States Navy, but was discharged before his senior year of medical school. Just prior to the Korean War he joined the Air force and ended up in San Antonio at Randolph Air Force Base in the school of Aviation Medicine in 1951.

While at Randolph and having completed what ended up being a residency program, Berry tells the story of the time he received sealed orders instructing him to report to Wright-Patterson Air Force Base in Ohio in civilian clothes where he would be told what to do. Upon arrival there were two men sitting at a table.

“Okay, what am I here for?” Berry remembers asking the men. Their response was that he was there to help select astronauts.

With a chuckle Berry says he responded with, “What’s an astronaut?”

This was the beginning of his involvement in one of the greatest scientific undertakings in American history.

“A nation has to have initiatives like the space program to stimulate advances in science and technology,” said Berry. “The kind of advancement they generate are necessary to remaining a leader nation.”

The items in Berry’s collection, including unique and one of a kind pieces, help sketch out the history of those advances.

Among the items in the collection are 38 recordings of the meetings of the Joint US/USSR Working Group on Space Biology and Medicine held between the United States and the Soviet Union that eventually led to the Apollo-Soyuz joint space mission in 1975.

These recordings are believed to be the only remaining ones of meetings that, at the time, were more than just about planning. These negotiations were also a political effort to bring the two superpowers together for a common goal in space. The successful completion of the joint mission was considered by many as a symbolic end to the space race.

The works of other notable figures in the development of space medicine can also be found in the collection, including the papers of Dr. William Thornton and Dr. James Gaume.

Thornton served in the U.S. Air Force in the aerospace medical division beginning in the early 1960s. His dream to become an astronaut became a reality when he was selected by NASA in 1967.

He served aboard two missions logging 313 hours in space: STS-8 Challenger in 1983 and Spacelab 3 Challenger in 1985. Thornton holds more than 35 patents that cover a wide range of applications, many of them space related, including exercise equipment used in orbit.

Gaume’s work during the mid to late 1950s involved developing the technologies needed to sustain long-term stays on the moon. His papers include oversized drawings of potential lunar housing facilities.
Many everyday items used today for a variety of purposes were developed as a result of the early space program.

Berry stresses the importance of these early advances.

“There is really only one other event that may create as many advances in science and technology as the space program and that is war; I would rather go to space.”