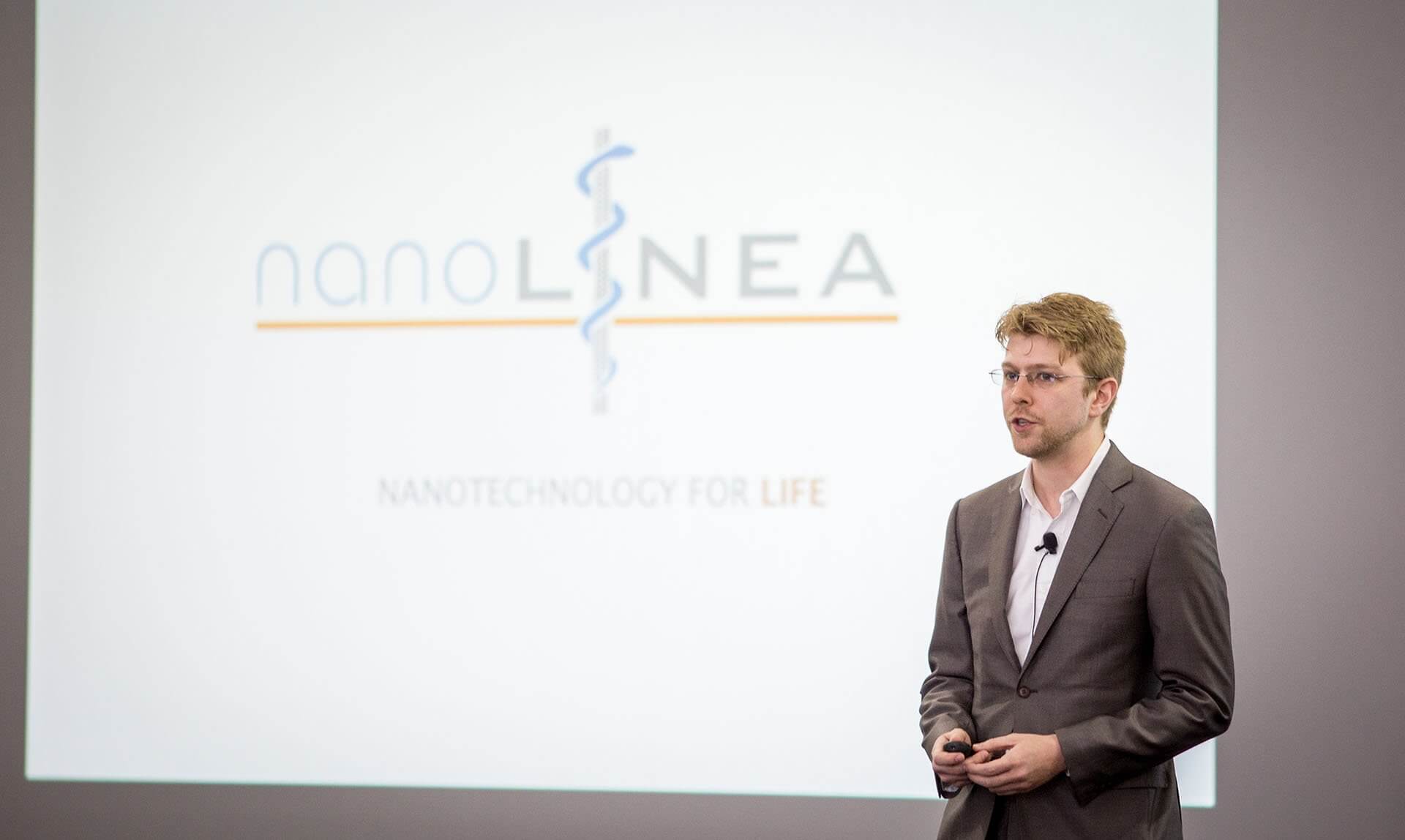 Each year, approximately 735,000 Americans experience a heart attack. The all-too-familiar warning symptoms of chest pain and shortness of breath have become cultural signifiers for cardiac disease as a whole, the number one cause of death for both men and women in the United States. For survivors of a heart attack, the battle doesn’t end there—scar tissue from the attack can prevent the heart tissue from correctly conducting electric signals, leading to an irregular heartbeat. When the scar tissue appears in the ventricle wall, the area most commonly damaged by a heart attack, this irregularity is known as ventricular arrhythmia. The condition can be deadly, and existing treatments for managing it have a variety of drawbacks, resulting in significant costs for hospitals and payers. Fortunately, one daring TMCx company is seeking to leverage new advances in nanotechnology to short-circuit that gap.

“Our technology is a cardiac implant, called the CardioLinea, that can treat or prevent heart arrhythmias caused by scar tissues, a common problem for survivors of a heart attack,” explained Colin Young, chief executive officer of NanoLinea. “Our solution is unique and revolutionary because it’s based on a relatively new material: carbon nanotube fiber. It’s a material that’s great at transferring electric signals to and from heart tissue, but is also flexible and durable enough to remain implanted in the beating heart permanently without any risk of it breaking apart or losing function.”

With the ability to reside comfortably in the wall of the heart, over the scar tissue, the CardioLinea will enable patients to have correct electrical condition, regulating their heartbeat. Composed of soft, flexible and highly conductible fibers, the carbon nanotubes basically function as extension cords, picking up charges from one side of the damaged tissue and delivering them to the other.

“The main opportunity we see is to improve and reduce the cost of care for the population of patients who normally receive these treatments,” said Young. “We believe that there is an even greater opportunity to be realized if, through a combination of reducing complications and costs, we can create a treatment that makes sense for an even larger population of patients—those who are at risk for developing ventricular arrhythmia but aren’t treated due to those numerous drawbacks.”

NanoLinea’s technology took shape as a result of an unlikely union—collaboration between Mehdi Razavi, M.D., the director of electrophysiology clinical research at the Texas Heart Institute, and Matteo Pasquali, Ph.D., professor of chemical engineering at Rice University and an expert in the creation of carbon nanotube fibers. Once the pair discovered that the fibers being developed in Pasquali’s lab possessed the right physical properties to help treat heart conditions, their partnership surged forward.

“This is a treatment method that has not been tried before, with a material that has not yet been used in the human body,” noted Young. “There are many questions that have to be raised about whether or not this can really work, and whether or not it will be a safe technique—these are all good questions to ask! We are still in an early stage of development, and our primary goal for the next few years is going to be making sure that these questions are answered, particularly the question of long-term safety.”

While working on his chemical engineering Ph.D. with Pasquali, Young—along with two of his Rice colleagues—was driven to commercialize their discovery, helping to treat the thousands of patients struggling with heart conditions in the process. Deftly balancing the demands of a graduate student and the pressures of entrepreneurship simultaneously, he remains undaunted by the road stretching out in front of him.

“We have quite a long development cycle ahead of us before CardioLinea can become a reality,” concluded Young. “In one year, NanoLinea will most likely still be engaged in prototype development, refining our design for a vascular access delivery tool, and testing its effectiveness and safety in animal models. In five years, we’ll be engaged in human clinical trials both in the United States and abroad. It’s my hope that, at that time, we’ll be reaching out to even larger device companies to form strategic partnerships or to discuss mergers and acquisitions.

“With all that on your plate, you’ve got to remember that entrepreneurship cannot be a part-time job,” he added. “It’s far more efficient to begin at a time when you can devote yourself to it fully, rather than taking it on alongside other projects. I think that’s particularly relevant advice for anyone taking a startup technology out from an academic setting.”