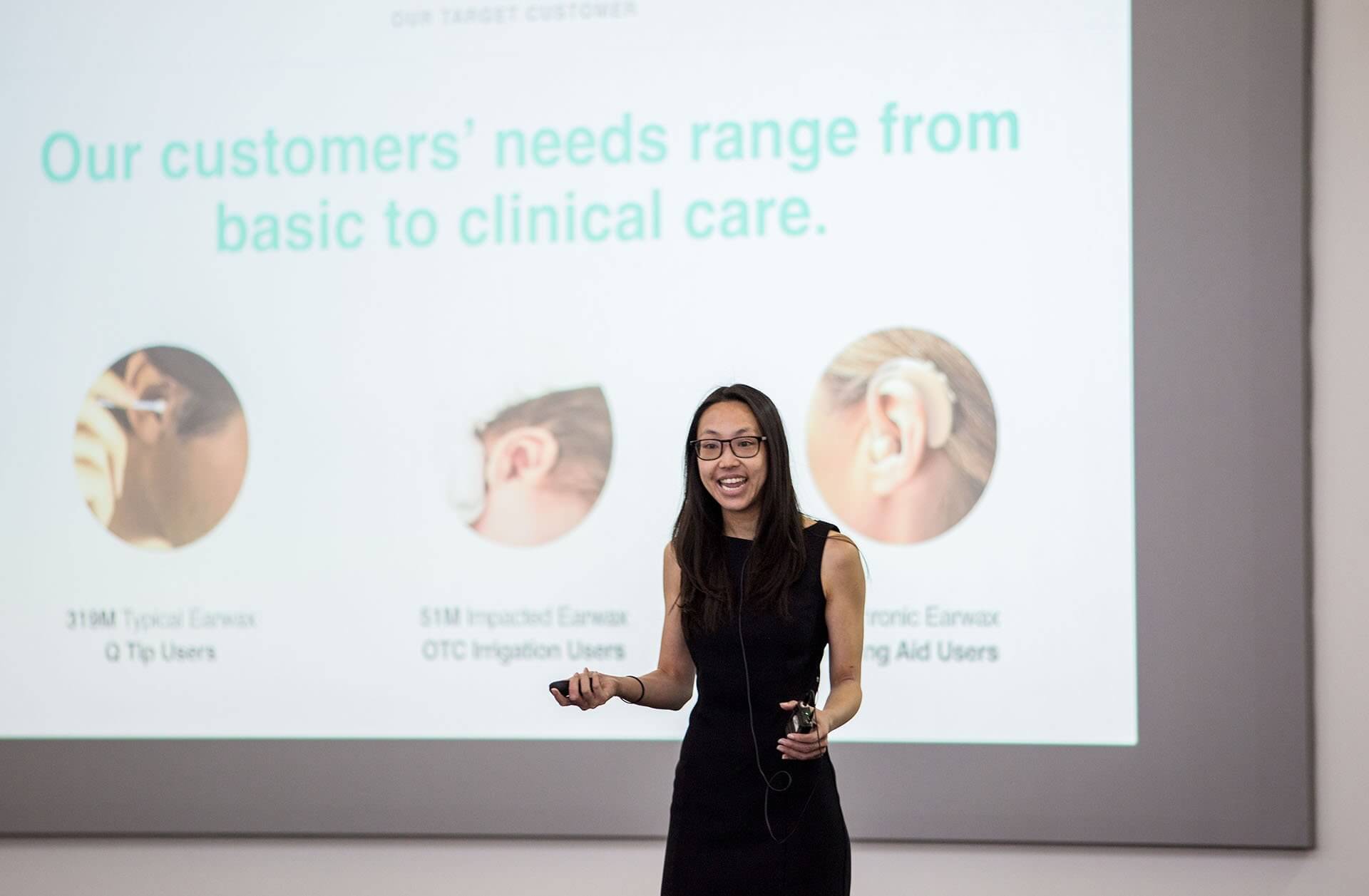 It’s a routine ritual—with a Q-tip pinched between your fingers, you explore the nooks and crannies of each ear, rotating the cotton swab absentmindedly as you probe around for any wayward wax. Whether you’re enticed by the prospect of removing moisture after a shower, the pleasant sensation itself or simply a desire for good hygiene, it’s a practice that seems as normal as flossing and brushing your teeth.

While earwax removal might not seem like that big of a deal, for patients who have hearing difficulties or issues with their inner ear, when the substance builds up it can have very real consequences on their quality of life. Paradoxically, using cotton swabs for cleaning can cause irritation, push wax deeper into the ears and even cause blockages and infections.

“In our conversations with physicians, we heard them continually share their stance that you shouldn’t put anything in your ear that’s smaller than your elbow,” said Lily Truong, chief executive officer of Clear Ear. “A normal ear canal is self cleaning—sure, cotton swabs look tiny enough, but they’re actually pushing earwax deeper into the ear, where it gets stuck in the parts that don’t clean themselves.”

According to Truong, trapped earwax also brings with it fungus, bacteria and viruses accumulated in the outer ear, potentially leading to pain and infection. Compounding the issue, pushing earwax deeper inside can block the ear canal itself, leading to hearing loss or even a ruptured ear drum. Individuals with more severe buildups might even depend on regular visits to their doctor for removal.

“In interviews with patients, we were constantly told that they aren’t going to just stop cleaning their ears cold turkey,” said Truong. “It’s a habit—for some, it’s been a habit for many years. Some people do it to feel clean; some do it to remove the water in their ears after a shower; others purely because it feels good. One interviewer commented, ‘Why should I stop one of the most enjoyable parts of my day.’ People are frustrated with a lack of alternative options for cleaning their ears other than, ‘don’t do it.’”

Clear Ear aims to provide that middle ground between fastidiousness and negligence, enabling patients to clean their ears in a way that is safe, effective, and easy to use. With a sleek, minimalist design, their first product, the Oto-Tip—a patented device for daily ear cleaning currently being used in 1,250 homes—looks like a hybrid between a miniaturized electric toothbrush and a futuristic Q-Tip.

“We worked with our clinical advisors to create an ear-cleaning system that still lets people get the enjoyment and satisfaction of cleaning their ears,” said Truong. “At the same time, it limits them to only cleaning in the area of the canal where they can do it safely—no matter how hard they push, the built-in safety cap prevents the tip from ever hitting the ear drum or pushing the wax deeper and shoving it off the natural ‘conveyor belt.’”

Whirring quietly, the Oto-Tip’s spinning swab rotates in a steady spiral motion, using its soft, flexible tip to gently guide wax out of the ear canal. The inspiration for Oto-Tip’s spiral-spinning technique traces back over two millennia, when the Archimedes’ screw leveraged that same principle to pump water by turning a screw-shaped surface inside a pipe. The parallels between the ear canal and a pipe blocked by water and wax are strikingly simple, providing the perfect conceptual basis for the Oto-Tip.

The next product line in their development cycle, the Total Ear Care (TEC) Line, aims to provide deep-cleaning ear irrigation for patients suffering from more severe buildups. According to Truong, over 100 ear cleanings have been performed using their ear irrigation technology, which automates the delivery of its water sprays and temperature to remain consistent every time.

“One of our patients came to us and said they were unable to hear from their left ear—they’d been suffering with incredible pain for at least one month,” reflected Truong. “His ears were cleaned with our TEC system, which ended up flushing out a huge calcified mass of earwax that had built up over time. Once it was removed, he could all of a sudden hear again and couldn’t stop smiling. Moments like that give the fortitude to push through the ups and downs of building a company.

“I have firsthand experience with hearing impairment after my mother went deaf in her left ear years ago,” she added. “We’ve seen that ear health is a space that hasn’t seen a lot of innovation—we wanted to bridge that missing link in the innovation chain in that space.”

Clear Ear was conceived as a project at the Stanford Biodesign Program, where co-founders Truong, a biomechanical engineer, and Vandana Jain, M.D., a surgeon, first met. In the process of working together, the two discovered that the number one cause of treatable, impaired hearing across the globe is—naturally—earwax buildup. Galvanized by their findings, as well as her own personal experiences, Truong set out to change the way that we think about aural hygiene.

“In the future, we aspire to be the ‘Sonicare’ of ear cleaning,” said Truong. “In one year, I envision us introducing the Oto-Tip into the market and having the Clear Ear brand make its way into households across the country. In five years, I envision the entire Clear Ear product lines rolled out, with a solution that fits each earwax type.

“The future of ear health is going to look like dental care does today,” she continued. “Similar to how you go in for annual dental cleaning to check up on how your teeth are doing, you’ll be able to go in for a Clear Ear cleaning and get your ear health check-up. Just like at the dentists office, where you get toothbrushes to take home with you, doctors will empower their patients to maintain their own ear health at home with Clear Ear.”