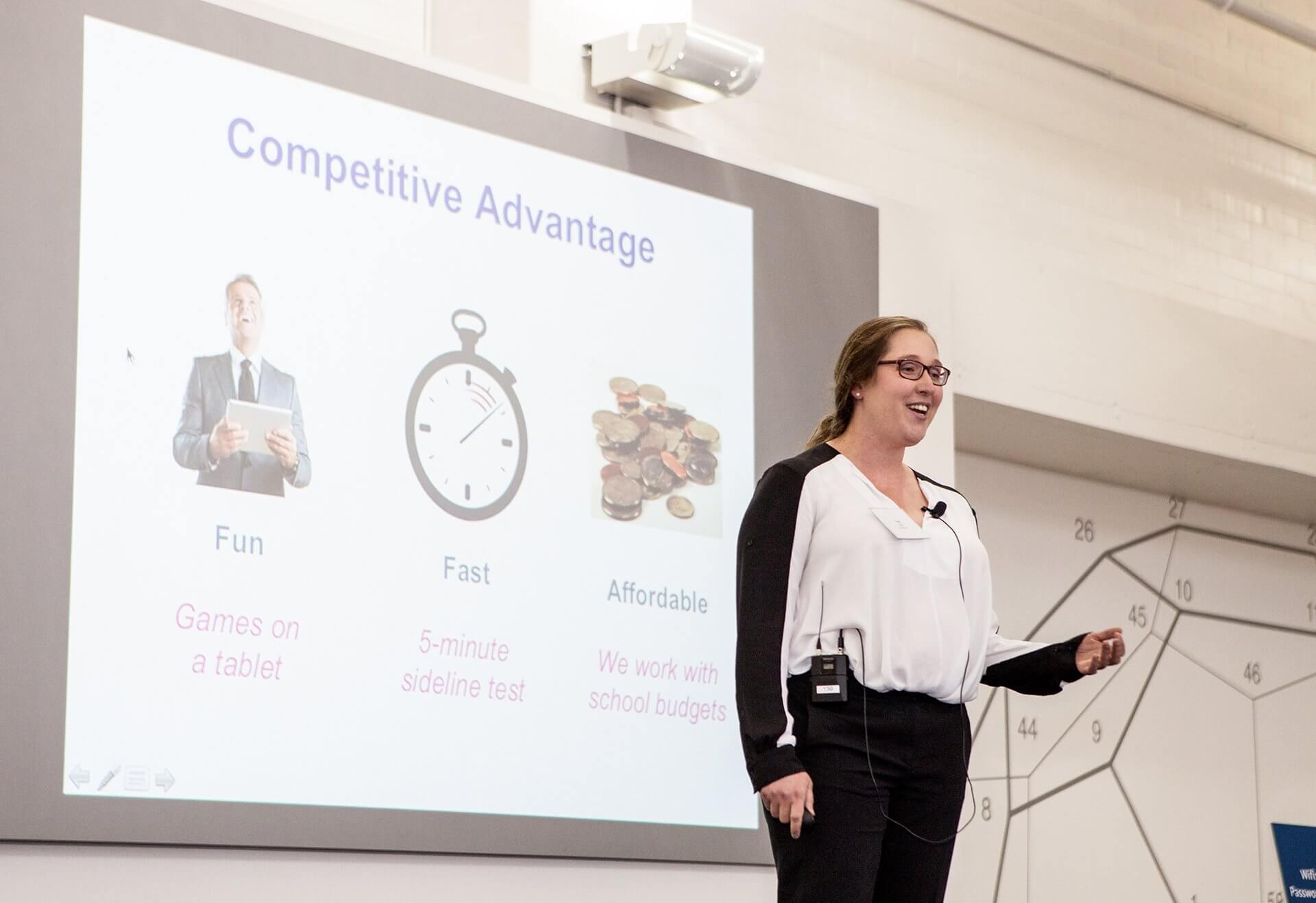 Kicking up clumps of AstroTurf beneath their feet as they propel themselves across the field, two high school football players collide, jostling helmets and rattling heads before crumpling to the ground. One stumbles over to the sidelines—is he fit to play or did he sustain a more serious injury? Visiting her parents over the holidays, a daughter’s ears perk up at the third instance of her father grasping at the threads of their conversation, struggling to remember major life events—is it the expected cognitive decline of aging or the abrupt descent of dementia?

Over 3.8 million traumatic brain injuries—also known as concussions—are reported annually in the U.S., most of which stem from team sports and military involvement. In these instances, early detection is critical, potentially preventing irreversible damage. Another threat to cognitive health, Alzheimer’s disease afflicts 1 in 9 people in the U.S. over the age of 65. Minor cognitive impairment, associated with a significantly increased risk of developing dementia, can strike at a younger age—detecting any mental blips in those early stages is similarly essential.

BrainCheck, the company behind a mobile interactive test for cognitive health, is aiming to identify cognitive issues as they occur, avoiding the risk of future injury or deterioration. “Essentially, we create simple video games that can detect changes in your cognitive health,” said Yael Katz, Ph.D., chief executive officer of BrainCheck. “It’s a very streamlined, interactive mobile solution that takes about five minutes. More importantly, it can be self-administered or administered by someone without clinical training.”

In the case of concussions, many schools lack a depth of clinical knowledge surrounding traumatic brain injury and don’t have athletic trainers available who can tend to injured athletes. According to Katz, BrainCheck’s mobile test can be administered by anyone—from coaches to parents—on the sidelines, in real time.

“If somebody sustains just one concussion, then most likely they’ll recover just fine,” she affirmed. “If they get a second one at the same time that they’re still recovering from that initial concussion, then they can have permanent brain damage. So detecting concussions as they occur is critical.”

Katz sees BrainCheck expanding into industry and the military sector, as well, where generalized impairment—from cognitive fatigue due to lack of sleep or eating to impairment stemming from drug or alcohol use—can pose major safety risks. Being able to gauge whether someone is capable of safely operating a forklift or driving an 18-wheeler can mean the difference between a routine workday and an unexpected catastrophe.

“Another application is with dementia, although we’re still in the pilot phase there,” continued Katz. “Typically, people don’t realize that they have memory decline until they’re quite far along. There are a whole bunch of clinical trials being conducted on Alzheimer’s, and many of those trials have not been successful. One of the reasons is that the patients in those trials are past the point of no return. What we hope to do is basically match patients with the appropriate trials, which is a win-win from both sides.”

A tapestry of familiar visual puzzles and video games, from Simon Sez’s alternating flashes of color to a dexterity diagnostic that prompts the user to tilt their device and keep a virtual orb centered in the middle of the screen, BrainCheck’s test is refreshingly simple. After downloading their software, available on iPads and Androids alike, the user takes a baseline test before any problems occur. When an injury strikes, or a cognitive health concern emerges, the user takes a self-administered, post-incident test comparing the results to the most recent baseline. Afterwards, the person administering the text—a parent, coach or the patient themselves—uses color-coded results to determine if additional medical assistance is required.

“Some people might wonder, ‘Can you really perform such a lightweight, self-administered, simple solution? Is it possible to replace hours of clinical expertise in five minutes?’” reflected Katz, emphasizing that BrainCheck’s mobile test does not qualify as a clinical diagnostic tool, but a metric to determine if additional evaluation is needed. “But we’re not trying to be the endpoint in the entire process. We’re not removing the doctor from the equation. Instead, we’re casting a really wide net to identify people who might have a cognitive impairment so that they can connect with their physician for more extensive evaluation.”

Born out of the Laboratory for Perception and Action—the workplace of neuroscientist David Eagleman, Ph.D., at Baylor College of Medicine, also the company’s founder and chief scientific officer—the potential applications of BrainCheck’s technology are as expansive as the mind itself.

“It’s astounding how many things can affect cognitive health,” said Katz. “People spend so much time taking measurments for other parts of their body, from cholesterol levels to blood pressure, and it’s a relatively new idea that you can do the same for your brain. And since we all have brains, the number of applications is really endless because the numbers of things that affect the brain are endless. ”

“There are so many interesting questions surrounding how to correlate individual behavior to affect the brain,” she added. “Whether you’re a medical student trying to determine how caffeine is influencing your cognitive health or a patient taking a drug known to have cognitive side effects, measuring and quantifying those changes is going to lead to a lot of insights into our ability to care for ourselves.”