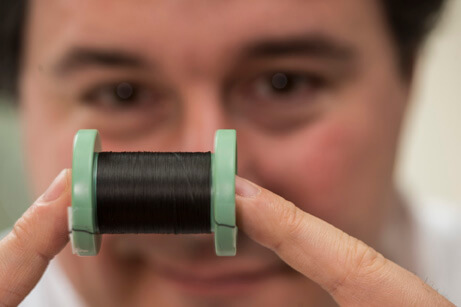 Texas Heart Institute (THI) announced it has received a prestigious American Heart Association grant alongside Rice University. The three-year, $750,000 grant will allow THI and Rice researchers to study and test soft, flexible fibers made of carbon nanotubes. The fibers’ ability to bridge electrical gaps in tissue is a groundbreaking discovery and offers hope to the millions of people affected by cardiac arrhythmias.

“By virtue of providing us this support, the American Heart Association has offered us a unique opportunity to further validate our initial studies that suggest for the first time cardiac electrical conduction through scarred heart tissue can be normalized in a safe, effective manner,” says Dr. Mehdi Razavi, the director of electrophysiology clinical research at THI and the project’s lead manager. “Should these more extensive studies confirm our initial findings, a paradigm shift in treatment of sudden cardiac death will be within reach, as for the first time the underlying cause for these events may be corrected on a permanent basis.”

A beating heart is controlled by electrical signals that prompt its tissues to expand and contract. People who progress to heart failure can have the formation of scar tissue over time – these scars in heart tissue conduct little or no electricity, creating electrical gaps and furthering heart problems.

“These soft, highly conductive fibers may bridge the electric gap in damaged hearts,” continues Dr. Razavi. “They’re like extension cords: they allow us to pick up charge from one side of the scar and deliver it to the other side. Essentially, we’re short-circuiting the short circuit.”

The fibers developed at Rice by the lab of Professor Matteo Pasquali are about a quarter of the size of a human hair. But even an inch-long piece of the material contains millions of nanotubes, microscopic cylinders of pure carbon discovered in the early 1990s. Though the fibers were developed to replace the miles of cables in commercial airplanes to save weight, their potential for medical applications became quickly apparent.

Because the fibers are soft, flexible and extremely tough, they are expected to be far more suitable for biological applications than the metal wires used to deliver power to devices like pacemakers. The fibers’ low impedance (its resistance to current) allows electricity to move from tissue to bridge and back far better than with metal wires.

The fibers show potential for many applications, including helping Parkinson’s Disease patients who require brain implants to treat their neurological conditions. The researchers will continue to test the fiber’s biocompatibility and hope that human trials are no more than a few years away. THI and Rice researchers are eager to use the funding from American Heart Association to continue their collaboration.

“We’ve been excited from the beginning to learn about each other’s areas and come up with uses for the nanotubes,” says Pasquali. “We’re determined to find ways to treat rather than manage disease, and we believe this fiber may help us treat all kinds of cardiac arrhythmias and electrical-conduction issues. With this funding, we will be able to continue to push the envelope in the treatment of heart disease.”