A Texas Medical Center psychiatrist shares her experiences in Nepal, helping survivors process the emotions left by a devastating earthquake 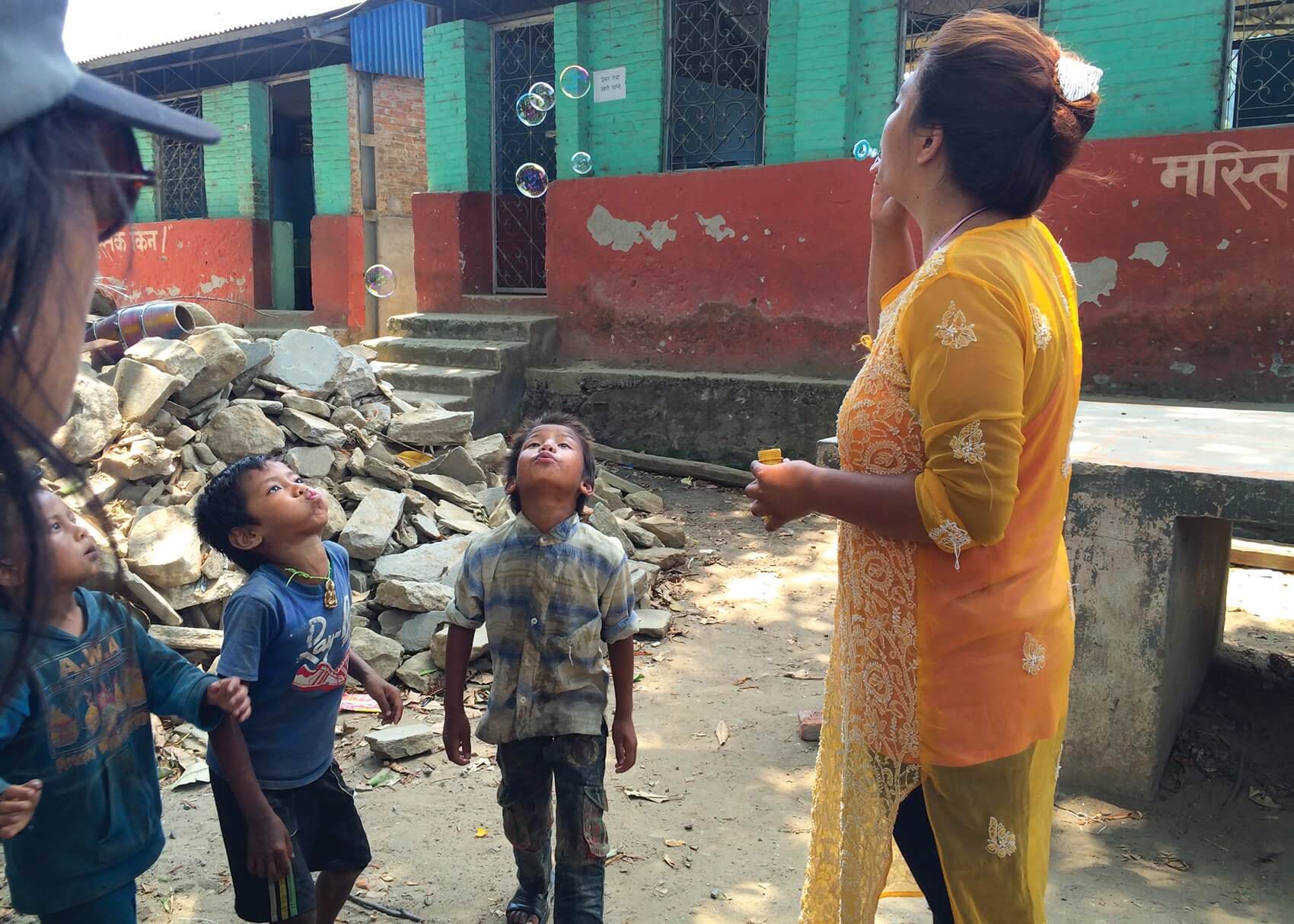 When a natural disaster strikes, those first hours and days are spent in survival mode. First aid consists of treating the injured, finding food and housing for displaced citizens and tending to other physical needs. As days become weeks and life turns to routine, it’s easy to forget invisible trauma—the scars left on the mind. This challenging task of healing the psyche took Sophia Banu, M.D., to Nepal in May. Banu serves as an assistant professor in the Menninger Department of Psychiatry and Behavioral Sciences at Baylor College of Medicine, and deputy chief of psychiatry at Harris Health System’s Outpatient Services, director of the child and adult psychiatry clinic at Ben Taub Hospital, and director of Harris Health’s International Trauma Survivors Clinic.

For years, experts warned of the potential for a massive earthquake in Nepal. Records dating back over 750 years show powerful quakes approximately every 75 years in the region. Sure enough, shortly before noon on April 25, 2015, the ground in Nepal started to shake violently. A 7.8 magnitude earthquake rocked the region, 81 years after the last major quake. In less than a minute, buildings were destroyed and thousands of people left homeless. The death toll from the quake and its aftershocks was over 8,000, with 18,000 injured.

Within hours of the earthquake, Banu reached out to a nonprofit organization called Disaster Psychiatry Outreach (DPO), looking for ways to help. Banu had previously worked with DPO after 9/11 in New York City, where she completed her residency.

“My family in Nepal was, thankfully, safe and nothing happened to them,” said Banu. “But I was feeling very helpless sitting here knowing that I could be of some help because I know the language, I know the culture and I’ve worked with a lot of trauma patients.”

While she waited on her vacation time to get approved so she could travel, Banu got to work right here in Houston assisting Empower Nepali Girls, another organization providing aid. She and pharmacy students from the University of Houston and Texas Southern University raised money to collect several bags full of painkillers, masks, gloves, water purifiers and antibiotic ointments to send to Nepal.

Banu’s family also pitched in. Her husband took care of their children and the household while she was away. Her sons, ages six and 11, and their friends operated a lemonade stand in Rice Village to raise money. They had a poster Houstonians could sign to send their best wishes to the people of Nepal. In just over four hours, they raised over $1,000.

“In times of disaster, you see the best in people,” said Banu. “It makes you believe in humanity.”

Finally, about four weeks after the initial earthquake, Banu arrived in Nepal. As she left the airport, she surveyed her surroundings. Despite the devastation marring the landscape, Banu noted signs of progress.

“There were still tents all along the road and you could see a lot of destruction, the houses all a big mass of bricks and stones,” said Banu. “But I also saw people were on the roads in cars, walking and on bicycles. I was sad to see all the destruction, but also quite glad to see that people were out and continuing about their day-to-day activities.”

In Nepal, Banu worked primarily with schoolchildren and teachers. Over three weeks, she and her fellow volunteers traveled to schools in villages throughout Nepal, where they spoke to students and teachers about the quake and its effects.

“We would gather them and talk about disaster, how disaster affects the community, what is a normal reaction and when you should seek help,” she said.

They also offered teachers training on how to help children who may be at risk for lasting psychological effects from the trauma.

“In the most remote villages, you may not have much of anything, but you have a school,” said Banu. “That’s one of the reasons why we targeted teachers and trained them in how to identify children with problems related to the trauma and how to help them.”

The goal was education and capacity building—giving communities the tools they would need to continue to support and help survivors, even after Banu and other volunteers had gone home.

Here in Houston, Banu leads a refugee clinic, which she started with the support of Baylor and Harris Health. She has worked with refugees from
all over the world. Though there are many similarities in the ways people deal with trauma, she noted different cultures also have unique challenges in the healing process.

In Nepal, Banu said there is a tendency to claim everything is fine, even when it’s not. Asking for help can be difficult. She described one teacher who told her everyone was doing well and did not need to talk about the earthquake. She later found out the teacher had lost his six-month-old baby. He was able to save his five-year-old, but could not rescue the younger child.

“I went to him and I said, ‘I want to let you know that it’s OK if you are feeling sad. You should talk to somebody.’ And he said, ‘No, I’m OK.’ Then, just a minute later, tears were pouring down,” she said. “In a way I felt glad that he was crying because he had to release it.”

The most common fear among the earthquake survivors was that it would happen again. The more than 100 aftershocks that took place in the weeks following the initial quake did not alleviate those fears. But even in the short time she was in Nepal, Banu said she saw growth.

“We would ask them, ‘What are the five things that worry you the most?’ When we were first there, it was all earthquake-related—landslides, family being hurt, aftershocks,” she said. “By the end of the third week, that started shifting a bit to, ‘I’m worried I won’t get a raise,’ or, ‘I’m not doing well in school.’ You could see normalcy returning.”

The invisible wounds of trauma often take the longest to heal, but Banu said the outward signs of improvement were inspiring. They were visible in the dozens of teachers who sat in a tent under the scorching sun, ready to learn with the eagerness of schoolchildren. They were visible in the young students laughing and playing with bubbles, despite the rubble surrounding them.

“I would go to these villages two or three hours from the city, where the road is not paved,” said Banu. “You would see houses that had been totally destroyed, and you would see people rebuilding them. The resilience is just amazing.”