Since 1972, the Michael E. DeBakey High School for Health Professions has given bright and motivated students a unique introduction to the world of health care 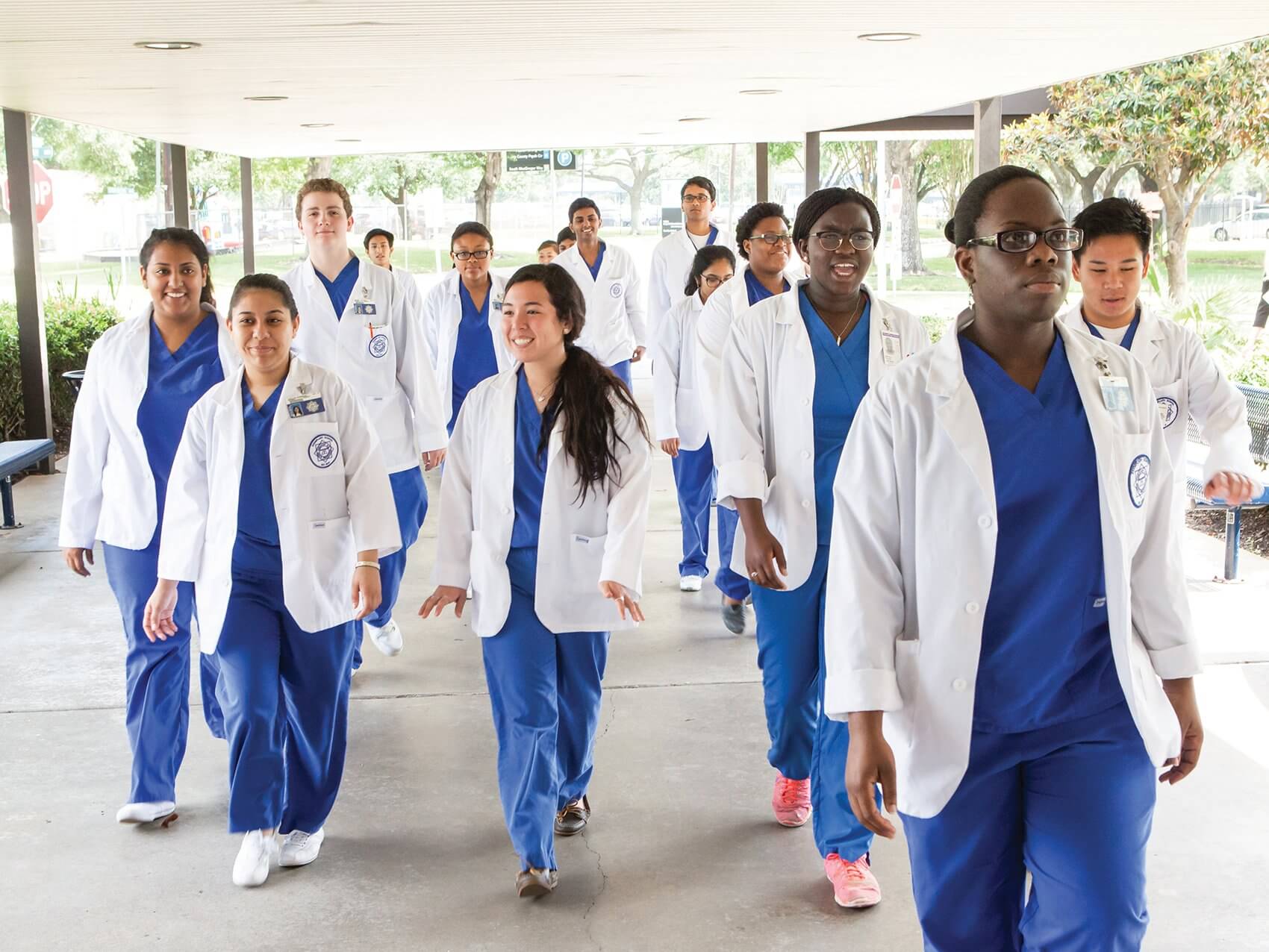 On a Wednesday morning at the Michael E. DeBakey High School for Health Professions, a classroom full of juniors is buzzing with activity. Anatomical diagrams throughout the room point out the different bones of the skull and names of the teeth. Students eagerly share what they have learned about being a dentist and show off models of the dental offices they designed. They speak about medical terminology with the confidence one would expect from a pre-med college student rather than a high schooler. Students and teachers alike say that is par for the course at DeBakey.

Founded in 1972 as a joint project between Baylor College of Medicine and the Houston Independent School District, DeBakey is a public magnet school that offers the opportunity to focus on health sciences at an early age. Starting freshman year with the Principles of Health Science, students receive an overview of a multitude of fields in health care, both inside and outside the classroom.

The DeBakey application process is competitive. Last year about 1400 eighth-graders completed the full application process, and the school only admits about 250 freshmen each year. The coursework students are expected to complete is similarly rigorous.

“All of our kids graduate with calculus, all graduate with at least one AP science, and then of course the four years of health science,” said Principal Agnes E. Perry. “We also require three years of a language other than English.”

The workload is intense, students said, noting school can be stressful at times as they juggle homework and high expectations. They know the late nights will all be worth it, though, when they are fully prepared for college. For DeBakey students, the question is never, “Will you go to college?” but simply, “Where will you go?”

“It just seems like the norm, even if the rest of my family hasn’t gotten here,” said rising senior David Dominguez, who plans to be the first in his family to attend college. “Even if there was some bit of doubt in my mind that, ‘Oh, I’m not going to college,’ it feels out of place in DeBakey.”

DeBakey has a 100 percent graduation rate, said Perry, and all students are required to apply to at least three colleges or universities by December of their senior year.

“If not 100 percent, then 99 percent go to college,” said Perry. “All kids are accepted somewhere.”

Despite the demanding classes, students said being immersed in a school full of talented, driven individuals is one of the best perks of attending DeBakey.

“You’re in an environment with so many other motivated and determined people, so that just gives you the encouragement to work harder yourself and improve yourself,” said rising senior Anushka Madhuvarshi.

“I think that’s really what makes us stand out,” added rising senior Kia Baeza. “Here, everything we focus on is academic—that’s what you come to school every day for. School is actually for learning, which is what it really should be. It gives everyone the outlook that you’re going to be successful.”

DeBakey teachers Shannon Niaves and Marie Bielamowicz praised the caliber of students they encounter in their classrooms. Like many teachers at DeBakey, both Niaves and Bielamowicz worked in other health-related fields before teaching. Niaves’ background is in nuclear medicine and Bielamowicz is a chiropractor.

“I wouldn’t want to teach anywhere else. These kids are absolutely amazing,” said Bielamowicz. “It’s just been a wonderful experience to see what they can offer and it’s kind of renewed my hope in the future.”

DeBakey has very little teacher turnover, said Perry, which is largely a credit to the student body.

“The students are so good here, I think we’d be disappointed if we went anywhere else,” said Niaves.

One of the most unique aspects of the school is its close relationship with the Texas Medical Center. By their junior and senior years, students are out and about in the medical center, shadowing surgeons, nurses, dentists, researchers—the full spectrum of health professions. For students, those hands-on experiences either confirm their interests or help them discover a new passion.

“Coming here, I thought I wanted to be a pediatric heart surgeon,” said recent graduate Taylor Waits, who will head to the University of Texas at San Antonio in the fall. “I want to be a pediatric speech pathologist now. Going to DeBakey helped me shadow a heart surgeon, before going to school and paying all this money to see that I don’t want to do it.”

“Students will have the ability to walk to some of these institutions, and we will also have the opportunity to have those medical professionals come in on a more regular basis to provide outreach or contact in the medical field,” said Perry. “Medical professionals are busy, it’s hard for them to jump in the car and drive to another location. We’re hoping the students will have more immediate access.”

Faculty and staff say that closer access will only increase the benefits DeBakey students get from spending time with the health professionals at the Texas Medical Center—a unique experience students said they value immensely.

“Before shadowing I had no idea what I wanted to do,” said Baeza of her experiences in the medical center. “It gave me the opportunity to realize this is exactly what I’m going to be doing every day. I want to do something I love with my life.”

Thanks to DeBakey, students are able to get a head start on discovering their passions.