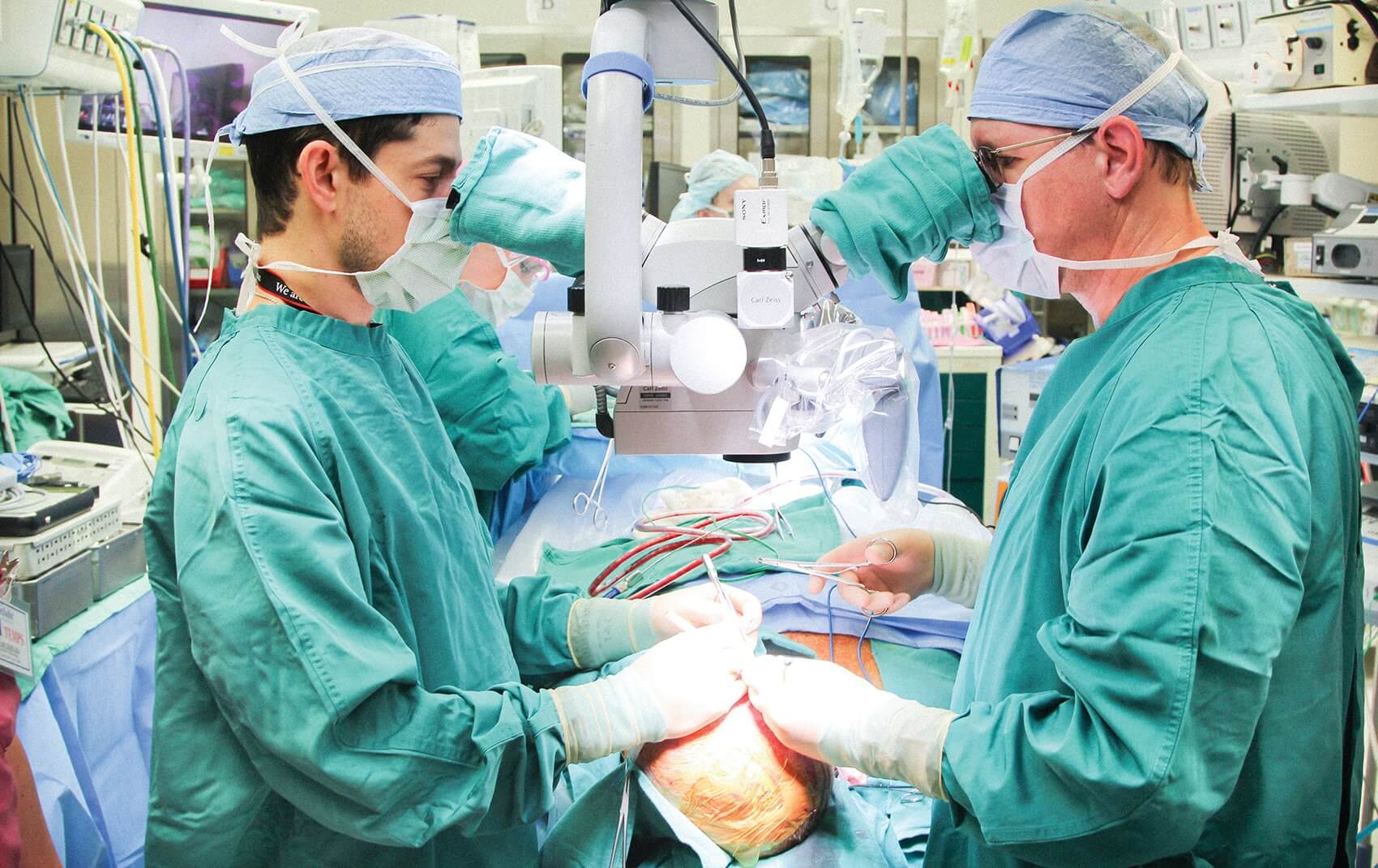 Four years ago, a painful Catch-22 situation brought Jim Boysen to The University of Texas MD Anderson Cancer Center. A deep scalp wound, the direct result of cancer treatment, was preventing him from getting kidney and pancreas transplants he desperately needed. At the same time, scalp reconstruction was stymied by his damaged kidney and pancreas.

“I was between a rock and a hard place,” said Boysen.

Little did he know that first visit set the stage for a trailblazing collaboration between MD Anderson, Houston Methodist Hospital and a handful of other Texas Medical Center institutions that would make medical history.

The now 55-year-old software developer from Austin, Texas, has faced more health trials than many do in a lifetime. Diagnosed with juvenile diabetes at age 5, Boysen received kidney and pancreas transplants in 1992. In 2006, he was diagnosed with leiomyosarcoma, a rare cancer of the smooth muscle, on his scalp. Though the cancer was successfully treated with chemotherapy and radiation, he was left with a wound so deep on the top of his head that it reached all the way through his scalp and skull to his brain.

On August 4, 2011, the wound brought Boysen to Jesse Selber, M.D., an associate professor in the Department of Plastic Surgery at MD Anderson. A scalp wound was not unusual to Selber, a microvascular reconstructive surgeon who has performed other scalp-related procedures. But the severity of the damage, in addition to the complicating factor of the failing organs, presented a unique challenge.

“For fear of an infection after transplantation, this wound was preventing him from getting his vital organs,” said Selber. “So that day I thought, ‘Well, would it be possible to transplant the skull and scalp together with the kidney and pancreas?’ All at the same time, and all from one donor.”

Selber considered the advantages of his idea. A dual surgery would enable Boysen to complete both the operations he needed in one fell swoop. Additionally, transplanting a scalp would ordinarily not even be worth considering—any tissue transplantation requires the patient be put on lifelong immunosuppression. But Boysen was a special case.

“Those medications can be dangerous, and we have a high threshold for doing it,” said Selber. “It’s mostly done for vital organs, however, Jim was going to get a kidney and pancreas transplant so he would already need those medications.”

The same medications needed to protect Boysen’s new kidney and pancreas could also protect the scalp and skull, Selber thought. He ran the idea by Boysen, who was immediately on board.

“I think they just found the right guy at the right time—when I had my pancreas done, that was experimental, too,” said Boysen. “I was not scared.”

Knowing the scalp and skull transplant had never been done before, let alone at the same time as not one, but two solid organ transplants, Selber and his team spent the next year planning out how the technical aspects of such a surgery might go.

“We had one really big missing piece at that time,” said Selber. “We didn’t have a transplant service to work with.”

During a talk about face transplantation Selber gave at LifeGift Organ Donation Center, he met just the man for the job: A. Osama Gaber, M.D., director of the Houston Methodist J.C. Walter Jr. Transplant Center.

“Dr. Gaber approached me and said something like, ‘We should start a face transplant program,’” said Selber. “I said, ‘I would love to do that, but first can you help me with this very complicated patient?’ That marked the beginning of a collaboration between MD Anderson and Houston Methodist.”

That collaboration would soon grow to include a handful of Texas Medical Center institutions.

“That’s what we try to do here in our transplant program,” Gaber said. “To be collaborative and extend this to the community. You’re going to need a lot of expertise you may or may not have within only one institution or another.”

For the next year, Selber and Gaber built the team that would facilitate and perform the surgery, which ultimately included over 50 health care professionals.

“There were a million steps to plan,” said Selber. “We did process maps, we planned every piece and we refined that process over and over again because it was going to happen all of a sudden. Transplantation is spontaneous, so you never know. The whole team had to be ready.”

“You saw something that was grey and lifeless come back to life in front of your eyes and turn into something pink, healthy and vibrant. That was miraculous and exciting.” — Michael Klebuc, M.D., Plastic Surgeon at Houston Methodist Hospital

On May 21, the call came from LifeGift: They had found a suitable donor. The donor selection process had been a bit more complicated than normal. The donor was a registered donor on the Donate Life Texas registry, but the skull and scalp donation required additional authorization from the donor’s family.

The organ retrieval took place at Memorial Hermann-Texas Medical Center. Meanwhile, Michael Klebuc, M.D., the surgeon who led the Houston Methodist plastic surgery team, spent the day preparing Boysen and giving him updates regarding his upcoming surgery. About 20 hours after the alert from LifeGift, it was go time.

On May 22, after years of planning, Selber said, “15 hours of some of the most fascinating and complex surgery I’d ever been a part of, which required dozens of surgeons and countless staff and health professionals” took place at Houston Methodist Hospital. The intricacy of such a surgery cannot be underestimated.

“A lot of times, people have the misconception that you just place the tissue there and it will grow,” said Klebuc. “Nothing could be further from the truth. That composite of tissue, which is bone, the skull, the hair-bearing scalp, comes with its nutrient blood vessels… They’re about 1/16 of an inch, so to make that tissue live and survive in a new location, you have to connect those blood vessels using stitches about half the diameter of a human hair.”

The skull and scalp transplant took place first, followed by the kidney and pancreas transplants.

“During the operation, when we removed little clamps and let the blood start to flow into the tissue for the first time—you saw something that was grey and lifeless come back to life in front of your eyes and turn into something pink, healthy and vibrant,” said Klebuc. “That was miraculous and exciting.”

By the time Boysen woke up, history had been made. The implications of the surgery are far-reaching.

“We now have a team that is technically capable of performing vascularized composite allografts,” said Selber, which could include the transplantation of faces, hands, abdominal walls and more. “This is something that’s offered in only a handful of places around the world, and we’re now prepared to offer this in the Texas Medical Center.”

The success of the surgery is due in large part to the breadth of expertise available in the Texas Medical Center and the opportunity for cross-institu- tional collaboration, Gaber added.

“The resources that are present here, that we were able to put together—very few places would have resources like this,” he said. “The quality of the doctors, anesthesiologists, neurosurgeons, plastic surgeons, microvascular surgeons—it’s very unique to have that group.”

After surgery, Boysen headed to Nora’s Home for several weeks of recovery. Nora’s Home is a hospitality house designed to host transplant patients and their families. Gaber is president of the board of directors of Nora’s Life Gift Foundation, and the home is named in memory of his daughter.

News of the groundbreaking surgery swiftly spread around the world. The procedure has the potential to open the door to even more revolutionary surgeries in the Texas Medical Center and beyond.

While the wide-reaching impact of his surgery is not lost on Boysen, however, his personal goal is more simple: to be able to live a higher quality of life.

“I feel really good, and I would like to get back to what I was doing probably five years ago, before my renal failure started to affect my life, and just continue for another 20 to 30 years of life.”