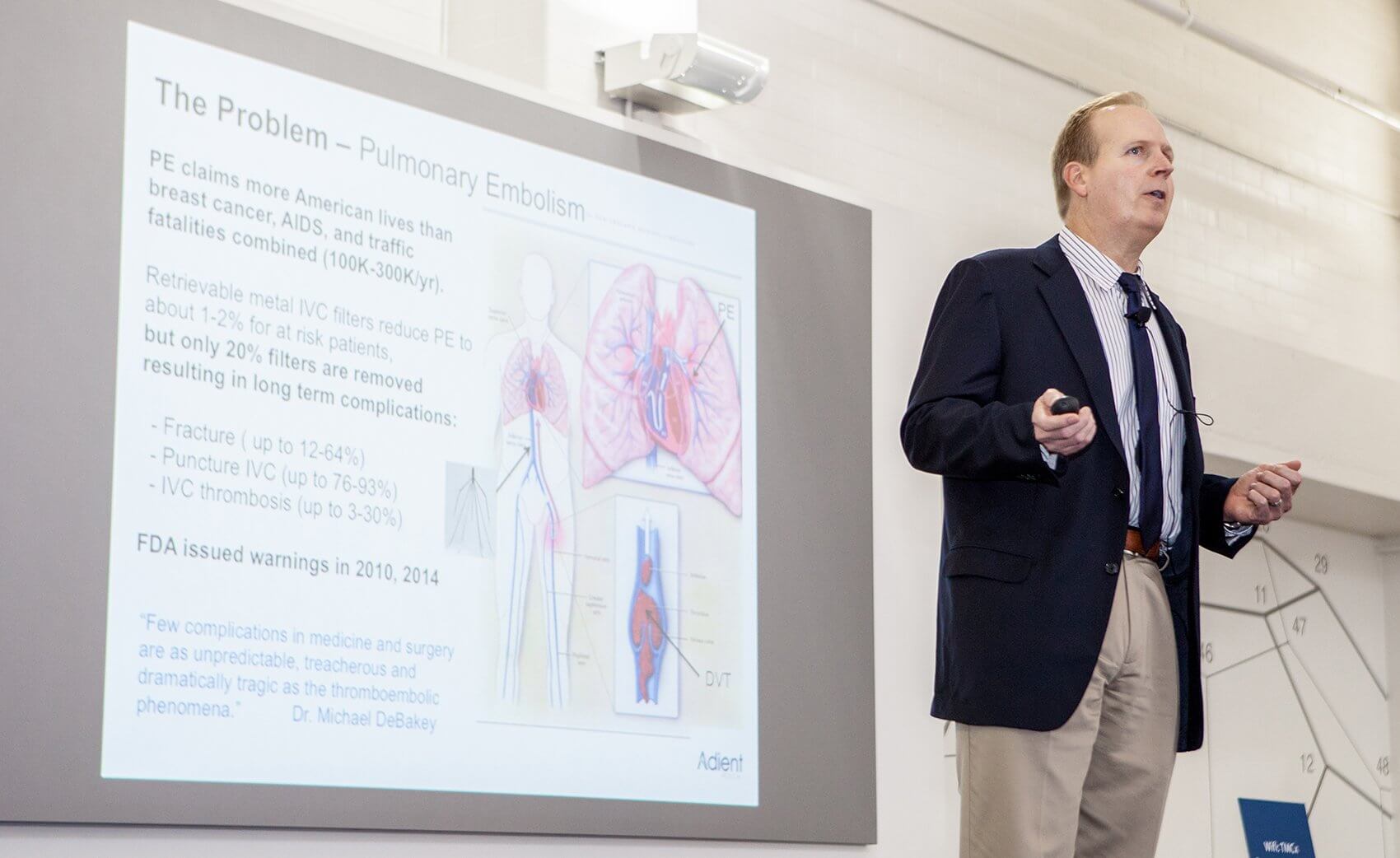 “Thu-thump. Thu-thump.” Pulsing rhythmically and inching its way towards the edge of the table, the artificial heart pump took on a life of its own. Mitch Eggers, Ph.D., president and chief executive officer of Adient Medical—a company that develops absorbable medical devices—stood at the switch of his own makeshift laboratory, set up in the back of his garage. His wife, shielding herself at the door, peeked around fringes of the frame with trepidation. Abruptly, the device began to bounce off the table. “It’s alive,” called out Eggers’ wife. “It’s alive!”

“We call it Igor now, because when we first started, it wasn’t secured like it is today and tied into the wall,” said Eggers. “We simulate everything. Our cardiovascular simulator has been going for around 94 weeks, continuously. It’s always running. It’s got a heart pump, which sounds just like a heart that’s beating, because it is—around 60 beats per minute. It just chugs and chugs and chugs. Once every two weeks we break it down, change the filters, and it’s up and running again.”

Since the company’s humble beginnings in Eggers’ garage—where they still conduct operations and experiments—Adient Medical has continued to harness that spark of mad-scientist ingenuity. Founded in 2012, the company is leading the development of a totally absorbable vascular filter for the prevention of pulmonary embolism, which claims more than 100,000 to 300,000 Americans each year—more than breast cancer, AIDS and traffic fatalities combined.

“The basic problem we’re trying to solve is the prevention of blood clots from reaching the lungs,” explained Eggers. “When that happens, the clots stop blood flow into the lungs, and you can’t get gas exchange. When people die from fatal pulmonary embolism, which is what we’re preventing, it’s typically asymptomatic. It can happen within a minute to two minutes once you block the lungs.

“We’re hoping to help patients who are at high risk of a clot—those that have had several deep vein thrombosis in the past or suffered a previous pulmonary embolism,” he added. “It’s typically seen in high trauma patients, as well as major surgery patients. Pulmonary embolism is actually the third largest killer in the U.S., following heart disease and cancer. There really isn’t a good approach outside of the conventional metal filters, which are problematic if you leave them in for a long time.”

Conventional metal filters, according to Eggers, are designed to be removed and retrieved in a week’s time. In some cases, patients don’t come back to the hospital to have them removed. Over time, those filters can fracture, necessitating surgery to retrieve different parts from throughout the body.

“I thought, ‘Why not make them absorbable so that they just do their job and disappear?’” said Eggers. “It didn’t seem necessary to leave in a permanent device. It turns out that there is one particular polymer that holds up really well, which is what we used in our first filter that we built. It disintegrated well after five weeks time.

“After our first paper was submitted, we realized that maybe we were on to something,” he added. “We continued to research and were surprised that nobody had done something like this before, because it seemed like a rather intuitive way to approach the problem. We basically solved a temporary problem with a temporary solution.”

Despite initial concerns that the filter would migrate to the lungs—a worry that was thoroughly disproven in animal experiments—Adient continues send reverberations throughout the health care and entrepreneurial communities. After taking first place at the American Medical Association (AMA) research symposium in 2011, they received the “Michael E. DeBakey Life Science Award” at the 2014 Texas Life Science Forum and the first place prize at this year’s Medical World Americas TMCx Pitch Competition.

“If you have a technology that you’re really passionate about and you really believe in it, just work as hard as you can to make it work,” said Eggers. “People thought we were nuts, putting an absorbable material in the central vascular system, but when it breaks down, it’s never released in circulation. If you put some hard work into it, it will happen even if there are a lot of naysayers in the beginning. As long as there’s a strong foundation, it’s just a matter of time.”