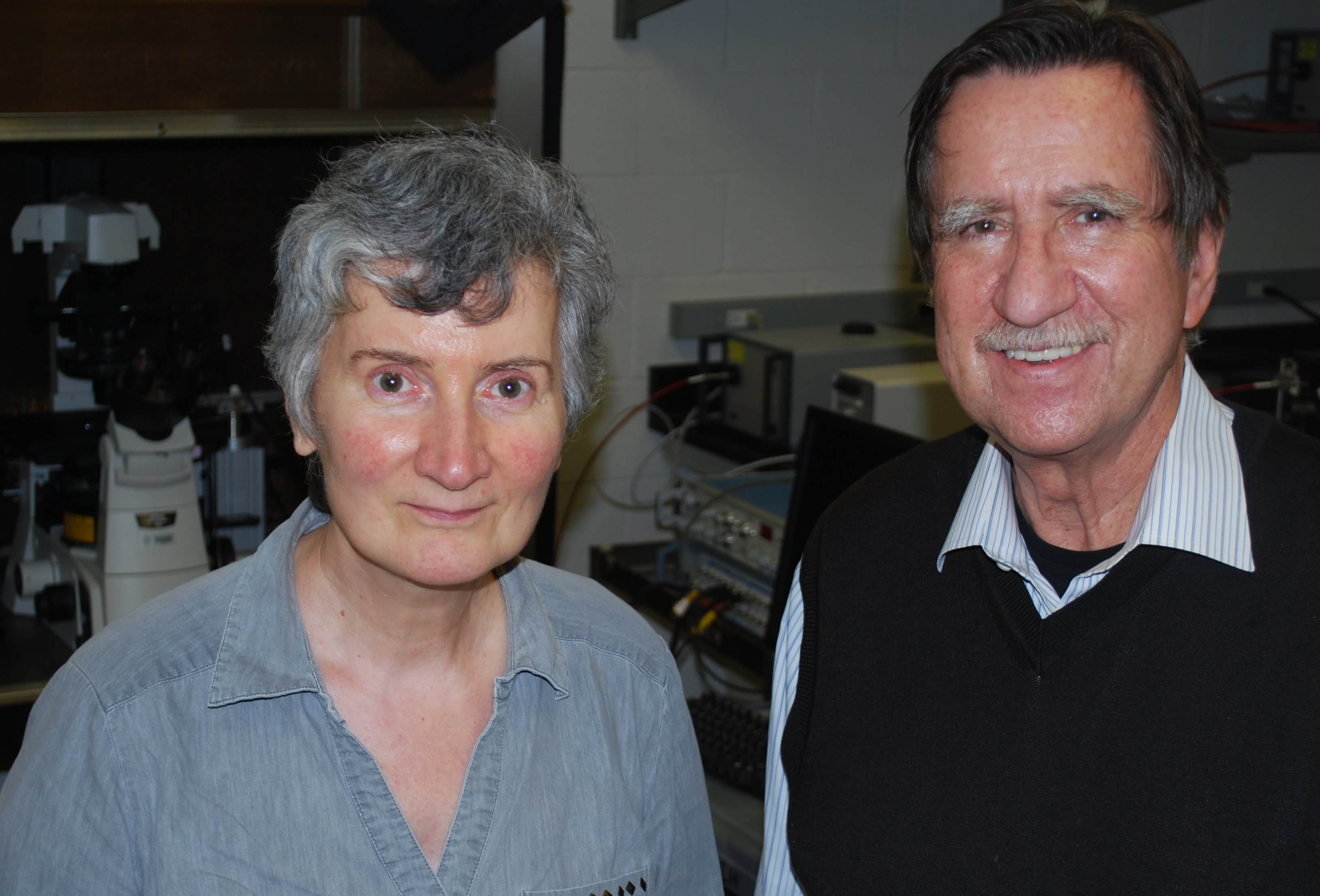 Light switches for neurons have made enormous contributions to brain research by giving investigators access to “on switches” for brain cells. But, finding “off switches” has been much more challenging.

Addressing the challenge, biochemists in the Center for Membrane Biology at The University of Texas Health Science Center at Houston (UTHealth) discovered a new family of light-activated proteins that work as “off switches.” Their study in Science online is titled “Natural light-gated anion channels: A family of microbial rhodopsins for advanced optogenetics.”

“These new light-gated channels dramatically increase the precision with which scientists can manipulate neurons,” said John L. Spudich, Ph.D., the study’s senior author and a professor in the Department of Biochemistry and Molecular Biology at UTHealth Medical School.

Optogenetics is a rapidly developing research field and traces its origins in part to the discovery of light-activated algal proteins controlling membrane electrical properties by Spudich and co-workers Oleg A. Sineshchekov, Ph.D. and Kwang-Hwan Jung, Ph.D., in 2002.

“John’s earlier work on light-activated channelrhodopsins provided the foundation for optogenetics, a technological development that has revolutionized neurobiology. His Science paper describes a newly discovered and more sophisticated channelrhodopsin that the neurobiology community can add to their optogenetics toolbox,” said Rodney E. Kellems, Ph.D., professor and chairman of the Department of Biochemistry and Molecular Biology at UTHealth Medical School.

Optogenetics is based on genetic targeting to make cells controllable with light. The technology is being used in animal models to understand brain circuits and their roles in brain functions and neurological diseases. By pointing a light, researchers can activate brain cells and map their connections with other brain cells and study the physiological functions they perform.

“Being able to reversibly silence neurons is just as important as turning them on,” Spudich points out. “In this work, we report the discovery of new rhodopsins in algae that function as fast and efficient light-gated channels for anions, just what is needed for controlled neural inhibition.”

Spudich said, “The reasons for our excitement are that in addition to exhibiting a function previously unknown to occur in nature, anion channel rhodopsins (ACRs) have a potential transformative place in optogenetics for light-induced neural silencing.”

Spudich believes these new molecular tools will have an immediate impact on brain research and clinical implications down the line.

He said the ACRs enable millisecond control of neuron spiking and require only a fraction of the light currently used to control brain cells, enabling experiments not previously possible and light delivery deeper into the brain.

“Their discovery gives us uniquely powerful tools to switch on and off specific brain regions with unprecedented ease and resolution, and my lab is very eager to apply this strategy to interrogate the central clock control of energy metabolism such as satiety and thermogenesis,” he said.

Valentin Dragoi, Ph.D., professor in the Department of Neurobiology and Anatomy and holder of the Levit Family Professorship in the Neurosciences at UTHealth Medical School, said, “The new powerful tool developed by Dr. Spudich and colleagues will be invaluable for probing neural circuits in animal models, finally allowing physiologists to manipulate the neural machinery that drive cognitive processes.”

As for possible patient treatments, ACRs could potentially be used to treat seizures associated with epilepsy, Parkinson’s disease, chronic pain and other neurological disorders caused by the over-spiking of neurons. “By targeting ACRs to specific neural cell types, we could use light to attenuate the firing rate to normal levels,” Spudich said. “The potential use of ACRs in clinical optogenetics also extends to overactive cardiomyocytes occurring in heart disorders.”

Spudich, Janz, Kellems, Chen and Dragoi are also on the faculty of The University of Texas Graduate School of Biomedical Sciences at Houston. A joint professor of microbiology and molecular genetics, Spudich is the Robert A. Welch Distinguished Chair in Chemistry and director of the Center for Membrane Biology at UTHealth.

Research described in the Science paper was supported by National Institutes of Health grants (R01GM027750, R21MH098288 and S10RR022531), a UTHealth Brain Initiative grant, the Hermann Eye Fund and endowed chair AU-0009 from the Robert A. Welch Foundation.