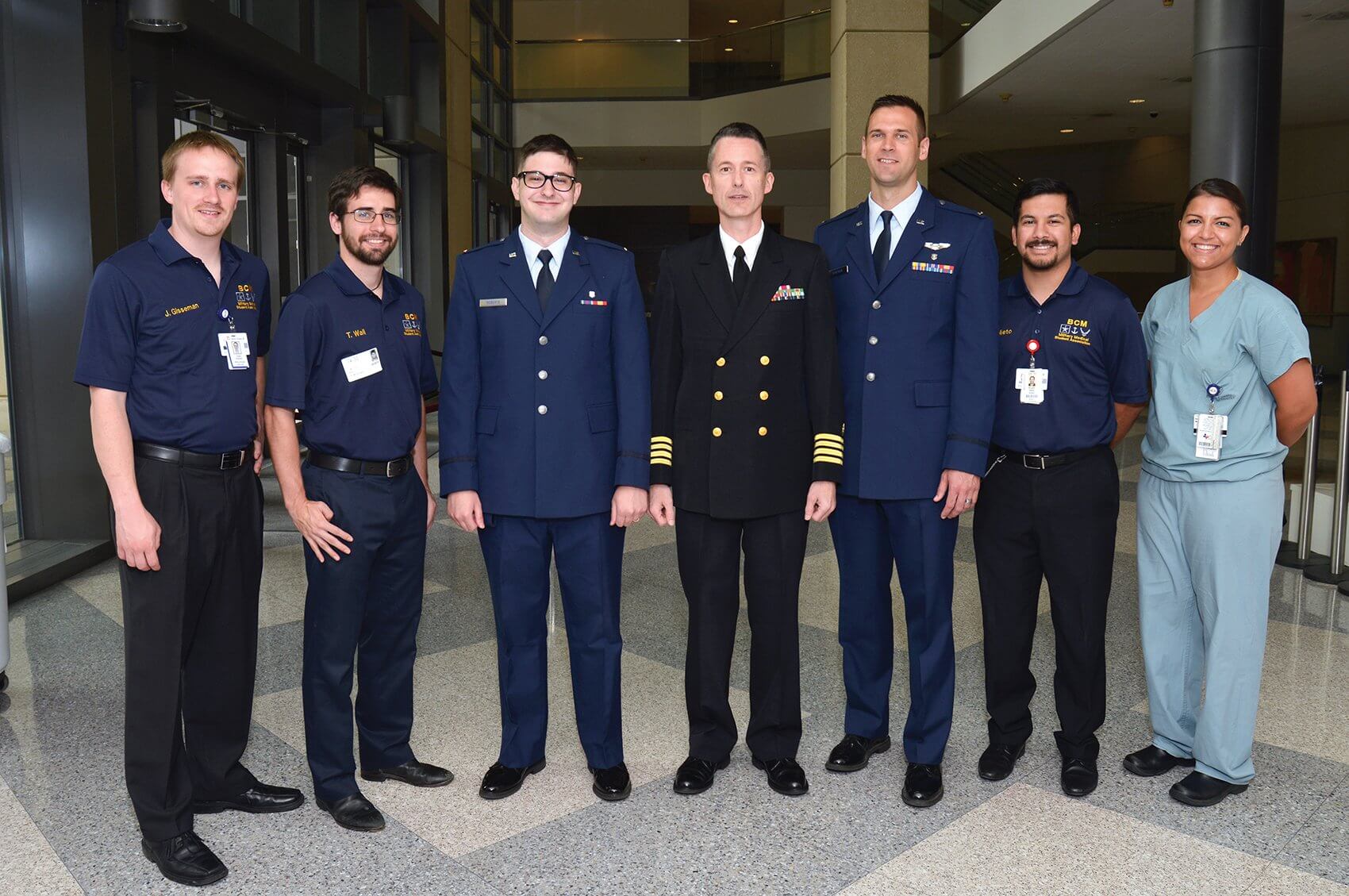 “It was very hectic but at the same time, a huge step forward,” said Roberts. “It really reinforced the responsibilities I’m taking on and also the tremendous privilege I have to serve not only patients, but patients in the military community.”

The commissioning ceremony honored Roberts and fellow medical school graduate and Air Force inductee Tim Soeken, who previously served as a pilot in the Air Force for five and half years before entering medical school. Both honorees were members of a reserve component during their four years at Baylor, and the military commissioning ceremony marked their formal acceptance as active duty members as well as their promotion in rank from second lieutenants to captains in the United States Air Force.

“We’re both extremely grateful to everyone involved for making the ceremony such an occasion,” said Roberts. “You really only need a notary public to administer an oath of office for an officer in the military, but everyone really went above and beyond to recognize this milestone, and I know Tim and I are both humbled by the experience.”

Timothy Porea, M.D., a Baylor faculty member and the clinical director of Texas Children’s Cancer and Hematology Centers, who recently retired from the Navy and is the advisor for medical students in the military at Baylor College of Medicine, served as emcee. The event took place May 26 in the DeBakey Library and Museum prior to the Baylor College of Medicine graduation commencement.

“Houston is not a military town in the sense of having any concentrations of active duty personnel, installations, or equipment such as fighter planes, ships or tank battalions,” explained Porea. “By virtue of holding this ceremony, though, we are recognizing the service that these two men are about to undertake on our behalf, as well as the service of the many people in this city who have come before them in wearing the cloth of our nation.”

In front of colleagues, family and friends, the graduates pledged their oath of service to their country and were formally commissioned to the rank of captain. Their ranks were then officially changed on their uniforms by members of their family—Roberts’ by his mother and Soeken’s by his wife and son.

In a special address to the families, Porea said, “You have every reason to be tremendously proud of your sons, husbands and father. Thank you for supporting them in their endeavors to this point, and thank you in advance for your continued support through residency and their time as a staff physician in the Air Force. These jobs will take them away from you for varying amounts of time, and these times will not always be convenient or planned in advance. Know that they are not only engaged in the calling of caring for those who need help in times of sickness but also in the equally noble profession of serving our country, wherever that may lead them.”

Both graduates will go on to complete their residencies through The San Antonio Uniformed Services Health Education Consortium Program in Fort Sam Houston, Texas. Roberts plans to specialize in psychiatry while Soeken will focus on ophthalmology.

“Eventually I hope to be stationed somewhere in the United States taking care of airmen who have served overseas,” said Roberts. “I’ll probably be working with patients suffering from things like PTSD or other mental disorders that may be correlated with stressors unique to the military population, and I can see myself working in the inpatient setting, taking care of more acutely psychiatrically ill individuals, or in the outpatient clinic setting as well. Either way I am looking forward to using my medical training to help members of the military.”

Because Soeken was trained as a military pilot prior to enrolling in medical school, he plans to use both specialties in his future career—serving as an Air Force pilot who also practices medicine.

“It sounds weird and it actually is pretty weird,” admitted Soeken. “The military has about a dozen officers who are both pilots and physicians, and basically we’re there for special circumstances and to offer our unique perspective. We could be called in to help determine the cause of an accident, evaluate new life-support equipment or consult on any number of things that might require both skill sets. We’re not flight surgeons—they’re the physicians who actually care for the pilots—we’re physicians who are also pilots.”

After he completes his residency, Soeken expects to spend part of his week performing surgeries in an eye clinic and the rest of his time flying—that is, when he’s not consulting on special projects or unforeseen events.

“It’s an incredible responsibility, as well as a great honor,” said Porea. “As of their graduation and commissioning, Robbie and Tim instantly outranked over a quarter of a million Air Force enlisted personnel and almost 1.2 million enlisted in all branches of the Armed Services. These young men and women will look up to them not just for their medical knowledge, but for what they represent as an officer in the military.”