Nearly 30 years after he helped draft a report that would later become the Americans with Disabilities Act, UTHealth Professor and TIRR Memorial Hermann Program Director Lex Frieden reflects on the challenges overcome and those still ahead 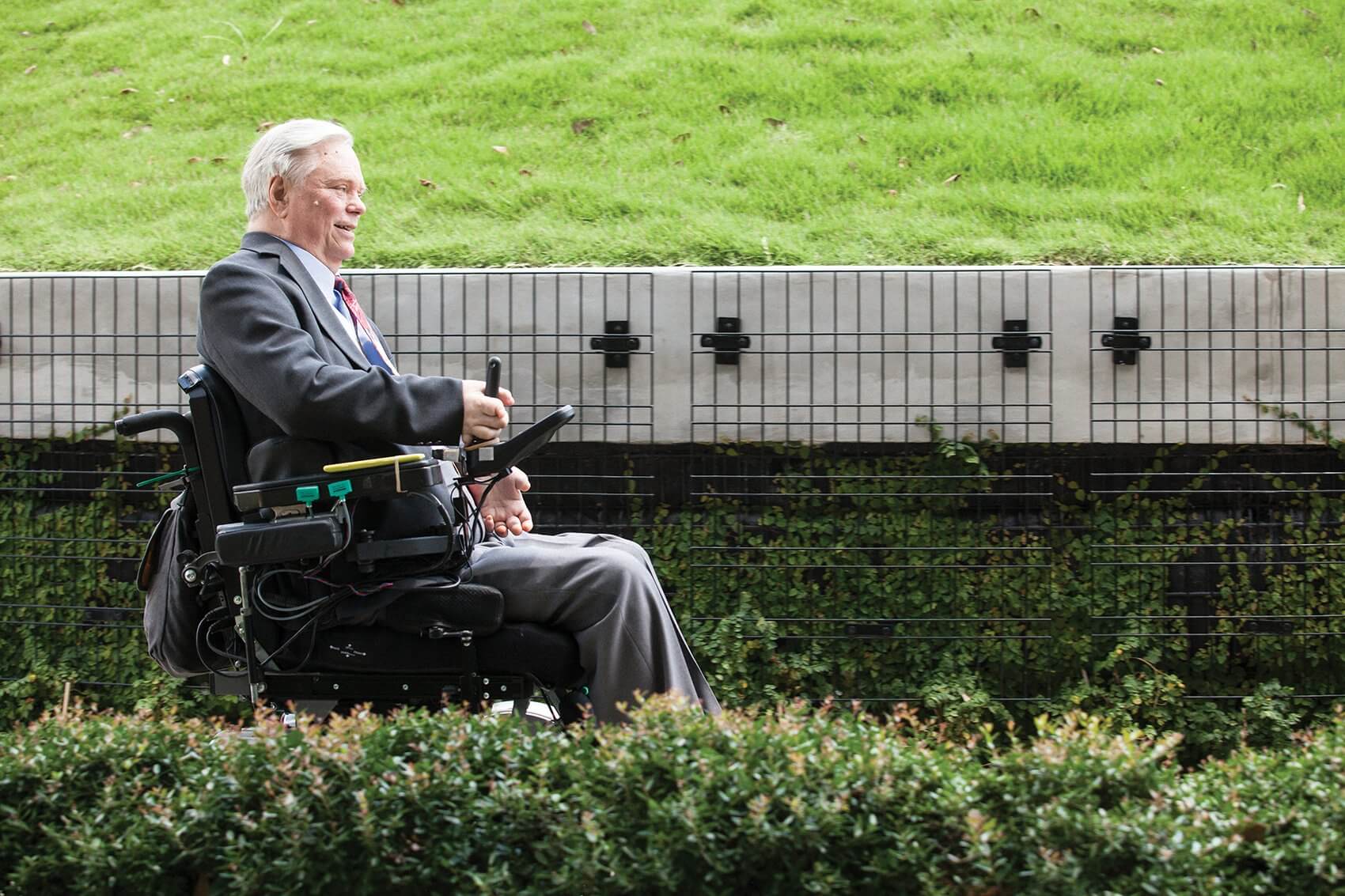 Shaded beneath the recently completed façade of the Tower of the Americas, the 750-foot observation tower that distinguished the 1968 World’s Fair in San Antonio, Texas, Lex Frieden sat contentedly on the sidewalk. Waiting for his friends to arrive—a small table perched on the arms of his wheelchair supporting a lone cup of beer—21-year-old Frieden experienced a sobering moment. A gentleman walking by paused, almost absent-mindedly, before casually stuffing three dollars into the cup. “Too bad you can’t get a job,” he lamented.

“That attitude was representative of what was prevalent at the time,” said Frieden, currently professor of biomedical informatics at The University of Texas Health Science Center at Houston (UTHealth) and director of the Independent Living Research Utilization Program (ILRU) at TIRR Memorial Hermann. “I don’t think I looked like a beggar, with my high-priced wheelchair and drinking a Lone Star beer, but I guess that was his stereotypical view of what an outcast in society might appear to be.”

Today, deftly navigating his motorized wheelchair, Frieden paints a vivid picture of a changed landscape. “At the time, people’s real challenges were not their own disability, it was the environment; it wasn’t their own attitudes, it was the attitude of other people towards them,” he said. “Regardless of how well prepared a person might be through the rehabilitation process, society had certain expectations of them that were hard to overcome. A lot’s changed since then.”

Changes made possible—in no small part—thanks to Frieden’s commitment to squelching discrimination and promoting accessibility. As a chief architect of the 1990 Americans with Disabilities Act (ADA), he helped draft legislation to protect the civil rights of the more than 56 million people with disabilities in the United States, including at least 3 million Texans.

“The ADA covers a wide range of issues,” said Frieden. “It covers transportation, education, and perhaps most importantly, employment. In the day before the ADA was enacted, I could apply for a job and an employer could look at me straight and say, ‘You’re in a wheelchair, we don’t employ people who use wheelchairs.’ It was perfectly legal for private employers. All that changed on July 26, 1990.”

In addition to banning discrimination based on a disability, the ADA requires that public accommodations, from restaurants to hospitals, make “reasonable modifications” to their policies and practices to ensure access for disabled members of the public.

“I’ve admired Lex since I first heard about him,” said Gerard Francisco, M.D., chief medical officer at TIRR Memorial Hermann and chairman of the Department of Physical Medicine and Rehabilitation at UTHealth. “I feel that what I’m doing on a daily basis to help my patients with disabilities is largely affected by Lex’s work in the 1970s and the passing of the ADA in 1990. My mission and vision for rehabilitation has been influenced, to a certain extent, by those accomplishments.”

Frieden’s role in shaping history stemmed from a head-on car crash in 1967 that left him paralyzed from the waist down. After coming to TIRR Memorial Hermann for rehabilitation, Frieden, then an 18-year- old freshman at Oklahoma State University, left determined to move forward.

“When I left TIRR, my doctors said that I could do anything I had done before I was injured—I just had to figure out how to do it on four wheels,” he recalled. “That didn’t seem intimidating to me, because we were sending men to the moon at that time. I left with a pretty positive attitude.”

Unfortunately, that optimism was deflated by the realities of wheelchair accessibility at Oklahoma State, where a lack of ramps made stairs and sidewalks loom large. After dropping out and setting his sights on Oral Roberts University in Tulsa, Frieden faced another setback.

“After applying, I got a letter back a few weeks later that said my admission had been denied,” he said. “I was sure there had been some mistake. Eventually, I just asked the dean, ‘What could possibly be the problem?’ It was because I had indicated that I used a wheelchair for mobility on my application—their policy was not to accept students with disabilities. I couldn’t even tell my parents. It was the first time after I broke my neck that I truly felt depressed.”

“I’d like Houston to be known worldwide as a model of full inclusion and equal opportunity for everyone, regardless of their personal circumstances. — Lex Frieden, professor of biomedical informatics at The University of Texas Health Science Center at Houston

Rebuffed, Frieden went to the University of Tulsa instead, where he graduated in three years. In 1971, he went on to pursue a master’s degree at the University of Houston, enticed by the fact that it was one of the first major colleges in the nation to have ramps in its buildings.

As a student, Frieden had the opportunity to do a fellowship at Baylor College of Medicine, as well as work at TIRR Memorial Hermann. “When I graduated, it just seemed natural to continue working in that stimulating milieu,” he said. “Baylor hired me as a research assistant, and my post at TIRR was developing programs to help former patients live independently in the community. And then we began to document what environmental barriers they faced.”

That systematic process led Frieden and his peers to question what style of living would help to lessen some of those obstacles. In 1976, they founded the Independent Living Research Utilization program, eventually helping to organize about 400 centers of independent living in the United States over the next decade.

At the same time, Frieden was broadening his scope of interest to include the issue of discrimination—spurred by a decade-late apology letter from Oral Roberts in 1978. After being appointed to report on potential accessibility improvements in Texas— which led to the state’s new building code—Frieden testified before Congress in 1983.

As executive director of the National Council on the Handicapped (now the National Council on Disability), Frieden and his peers were tasked with delivering a report on the legislative needs of people with disabilities. After crafting the report, titled “Toward Independence,” they prepared to show their findings to President Ronald Reagan. When the explosion of the space shuttle ‘Challenger’ sent ripples across the globe—two hours before their meeting—the group found themselves face to face with the vice president the following morning—George H.W. Bush.

“He had read our report the night before, and he seemed to relate to our issues. He told us that he and Barbara had a daughter who died as a result of leukemia at a very young age and that one of their sons had dyslexia, so it was a wonderful, productive conversation,” said Frieden. “By the end of it, vice president Bush said, ‘I’ll pass this along to the president, and I’m sure he will appreciate it, but you know I’m just the vice president.’ And then he added, ‘If in the future I ever have an opportunity to do more to help you, I will.’”

Two years later, Bush was elected as the 41st president of the United States; two years after that, he signed the Americans with Disabilities Act. Among many other significant developments, the law prompted wheelchair-accessible transit systems, led to our current electronic voting system—which allows blind voters to cast secret ballots—and barred employers from denying a qualified applicant based on a disability.

While many physical and societal barriers have dissolved, people with disabilities still struggle to find sufficient employment and face less overt—but no less insidious—forms of discrimination.

“There’s another aspect when we’re looking back at the past 25 years,” said Frieden. “The unemployment rate among people with disabilities today is nearly as high as it was when the ADA was passed. That’s counterintuitive. While all the buildings and facilities have been modified, some of the hiring practices and attitudes haven’t changed. We’ve gone from the case of open discrimination to the case of subtle, poorly informed judgments.”

On the cusp of the 25th anniversary of the law’s passage, the opportunities to reinvigorate the conversation and correct misconceptions about disability rights are endless.

“We’ve come a long way, but we need to continue to enforce change and empower people with disabilities,” said Francisco. “You’d be surprised—many people are not familiar with the ADA, and part of that is that they were not educated. They may know some elements but don’t know their overall rights. It’s an ongoing process, and it should be.”

“While disability awareness has come a long way, it needs to go further,” added Jay Stiteley, director of the Mayor’s Office for People with Disabilities (MOPD). “One of the components of that is to accept individuals with disabilities the same way that you would accept anyone else. It’s about recognizing that everybody is different—it doesn’t matter who you are, whether you have blonde hair or black hair or whether you read with your fingers or read with your eyes. The bottom line is that everybody and anybody can be productive. That has to be recognized and we need to allow people to demonstrate their skills.”

At TIRR Memorial Hermann, advances in technology present another opportunity to level the playing field. From its affiliation with NASA to its therapy programs in wearable rehabilitation robotic systems, the advanced technology available is allowing patients to better reintegrate into their communities.

“Our objective is to study and develop clinical applications for wearable rehabilitation robotic systems, such as exoskeletons, to facilitate recovery and community reintegration for people with spinal cord injury, stroke and other neurological disorders that lead to problems with walking,” said Francisco.

“The potential to use biomedical informatics to help people with disabilities is huge,” said Jiajie Zhang, Ph.D., dean of the UTHealth School of Biomedical Informatics, where he holds the Dr. Doris L. Ross Professorship. “The technology is already there, so the question is how to bring together the designed products to help people. From cameras that can detect if you’ve sustained a fall, to voice activation technology, the potential to turn those advances into systematic products is huge.”

Frieden believes that Houston—with the Astrodome’s long entrance ramps serving as a beacon of accessibility as far back as 1968—can continue to usher in an era of change. “Houston has been on the forefront in many of these breakthroughs largely because of the leadership in our community, throughout the medical center and as a result of public support for these issues,” he concluded. “I’d like for Houston to be known worldwide as a model of full inclusion and equal opportunity for everyone, regardless of their personal circumstances.”