Preparing for the Worst

In a first-of-its-kind simulation, UTHealth students learn what it’s like to be a first responder during a disaster

Preparing for the Worst 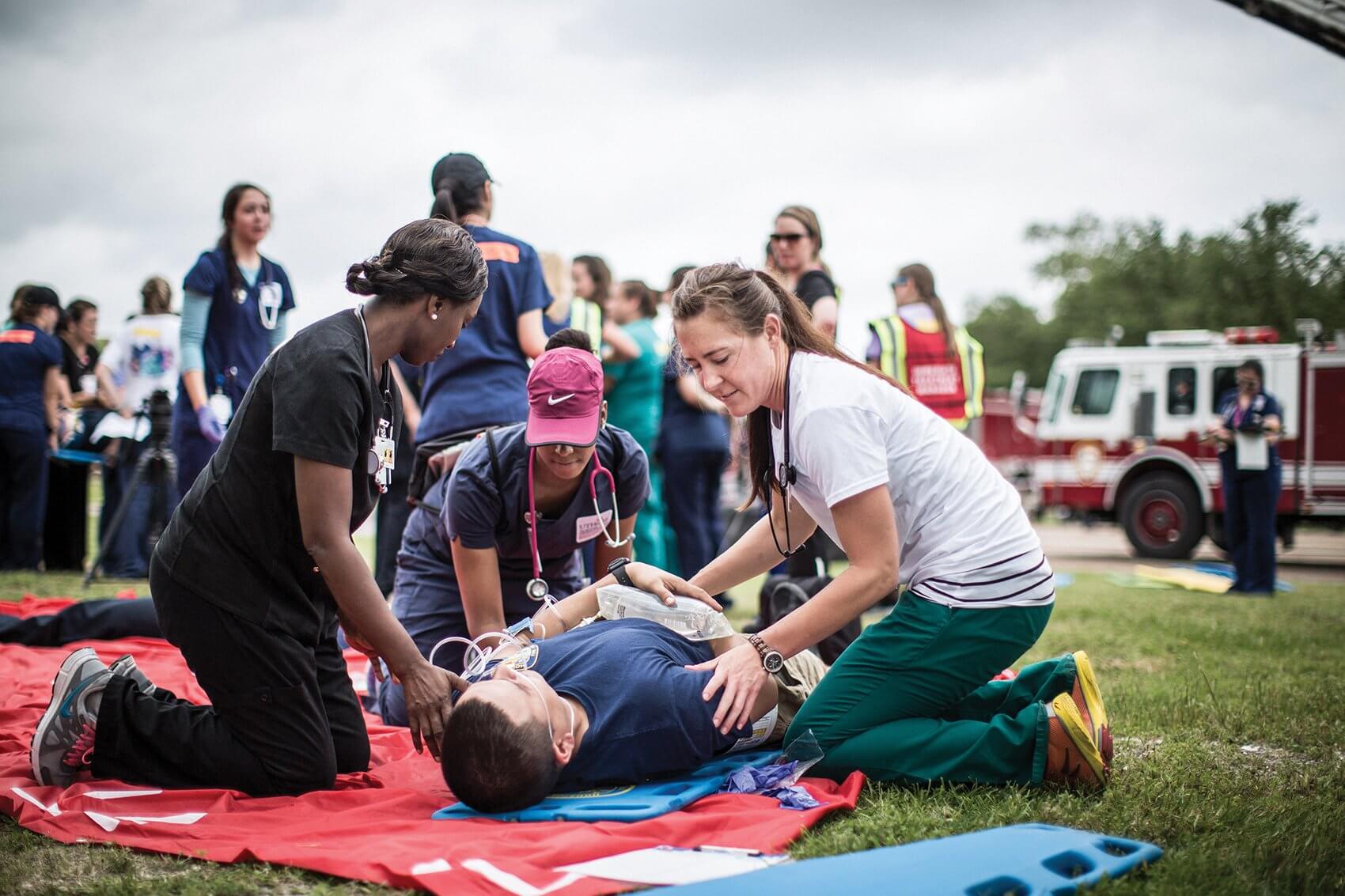 The skies south of William P. Hobby Airport filled with smoke as an army of nursing students ran out into a scene of chaos. The students organized triage groups based on injury severity, and set to work treating their patients. This was not the scene of a true disaster, but a first-of-its kind simulation exercise held by professors at The University of Texas Health Science Center at Houston (UTHealth) and the Houston Fire Department. Playing victims, HFD cadets took to their roles with a flair for the dramatic to help UTHealth students in nursing, public health and biomedical informatics learn what it is like to be a first responder in a disaster.

The event was the brainchild of Elda Ramirez, Ph.D., a professor of nursing in the Department of Acute and Continuing Care at the UTHealth School of Nursing. Ramirez knows first- hand what it is like to be called to action during a tragedy.

“I worked during Katrina. I was the director of nursing for the George R. Brown,” she said. “I lived bringing in people from different areas to work together. Things like that may never happen in your lifetime—but if they do, how prepared are people?”

Ramirez previously conducted simulations for students on a much smaller scale, but she always had bigger dreams. Those ideas turned into reality when Deborah McCrea became an instructor of clinical nursing at the UTHealth School of Nursing in Ramirez’s department. Having previously worked for the fire department, McCrea suggested HFD would be the perfect partner.

“I had a vision, I had some funding from a grant and she knew the people,” said Ramirez. “The Houston Fire Department brought us out here and when we saw what they had, it was a dream come true.”

Prior to the morning of the simulation, students had no idea what they would face. Upon their arrival at HFD’s Val Jahnke Training Facility, Ramirez and McCrea described the scenario as a train derailment and bus collision and gave students assignments for the day. Assignments were partially based on level of expertise.

In an effort to challenge the students, however, Ramirez said they tried to assign them outside their comfort zones.

The simulation worked just as it would in real life. Patients were organized by color: red for the most critical, yellow for less critical patients who would still need to be transported to the hospital, green for the walking wounded and black for the dead. Patients were all given colored ribbons and tags describing their injuries, and there were tarps in corresponding colors to organize patients. The students hustled around treating their numerous patients, strapping them to backboards, putting on neck braces and loading them into ambulances.

“It’s very beneficial for a student to go through these scenes so that whenever this does happen, we’re very prepared for this type of tragedy,” said Maritza Ruiz, a post-master’s student in the emergency and trauma care concentration. “I didn’t know exactly what to expect, but your nursing skills kick in and everything flows.”

The simulation was also beneficial for the cadets, who were participating as part of their community service requirements, said Capt. Tony Reed of the Houston Fire Department.

“It only makes sense to work hand-in-hand with those in the hospital setting, because we’re the first responders,” he said.

Though most of the students will likely receive trauma patients in the hospital rather than treating on the scene of a disaster, seeing what first responders deal with is still helpful.

“It gives an overview for everybody to know what it is to handle first response for the patients coming in to them,” said Reed. “They don’t know what happens pre-hospital and seeing it hands on is always better.”

Ramirez and McCrea hope the simulation will become an annual event, possibly in partnership with additional schools and departments. They also plan to implement more cutting-edge technology, like electronic patient records rather than the identification tags. For the students who participated in this inaugural simulation, the experience is one they will carry with them after they graduate and into their careers.

“Knowing what first responders deal with and go through solidifies the big picture for me,” said Ruiz. “Now when these patients arrive to me, I have a better expectation of what I’ll be receiving.”