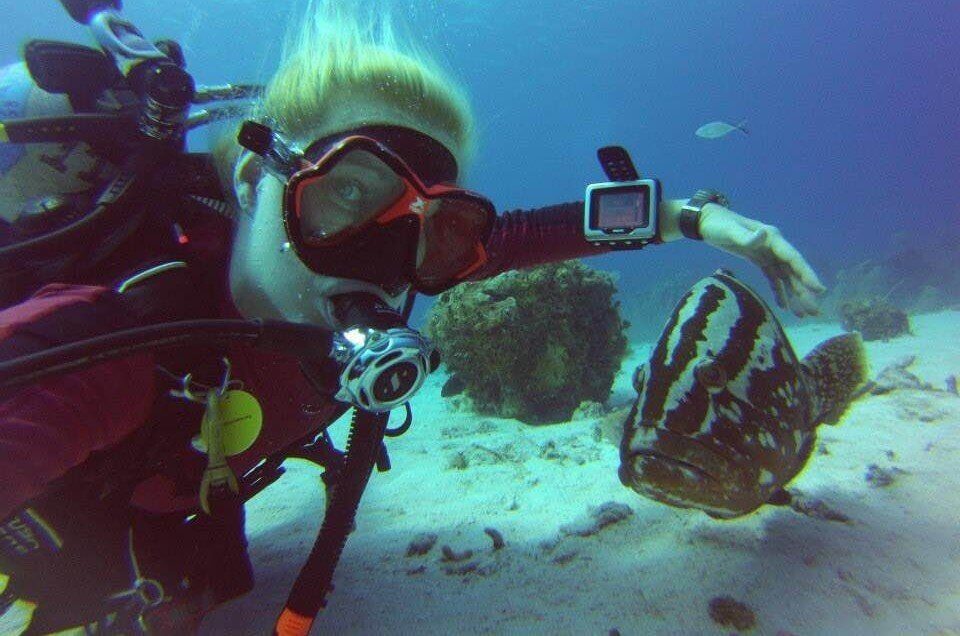 “The water is my second home,” she said. “I was on vacation in Mexico and the resort my family was staying at had a pool where they offered scuba sessions. Immediately, I begged my family to let me give it a try. They did, and I was hooked.”

During her undergraduate years, Oxley started working part time and eventually ended up managing a dive shop in Georgia. “It was a great experience meeting new people, talking scuba, sharing travel stories, trying out the new and upcoming gear, and watching people as they started their journey in exploring the underwater world,” she said.

After earning an undergraduate degree in biology from the University of Georgia in 2006, Oxley decided to postpone her plans of going to medical school. Instead, she packed a backpack and set out on an adventure that allowed her to travel the world. She immediately finished her scuba instructor certification and got her first job in Cayman Brac, a sister island to Grand Cayman Island. Oxley was the dive shop coordinator and an instructor for Reef Divers at Brac Reef Beach resort. One of her first large groups to manage at the resort was the Dive Pirates Foundation.

Dive Pirates is a nationwide nonprofit foundation dedicated to opening up the mainstream scuba world to divers with disabilities. The organization derives its name and philosophy from the combination of diving adventure and the romance of the Caribbean, especially the panache of pirates. Traditionally, pirate crews would take care of injured crew members by making them peg legs, hooks and eye patches. Disabled crew members were not banished from the ship, but were given new tasks that they could perform and still be useful to the rest of the crew. They were also given a predetermined cut of the booty in exchange for their contribution. Dive Pirates continues that spirit by bringing disabled scuba divers along with the rest of the crew and cutting them in on the priceless “booty” of scuba diving in the Caribbean.

“It really touched me the way they created a diving family that reached out to individuals who thought they could never experience diving, and I knew I wanted to continue to be a part of that family,” she said.

Oxley continued traveling for a few years before she returned to Georgia to pursue a master’s degree in nursing from the Medical College of Georgia.

“This was a scary move,” she said. “I was not sure if this was the end of my diving career, the start of a new career in nursing, or somehow a way to create a life where I could combine the two,” she said.

After graduation, Oxley was picked up by a Memorial Hermann recruiter and offered a position in the intermediate care unit at Memorial Hermann Northeast Hospital. Since the Dive Pirates Foundation started in Houston, she eagerly accepted the offer and packed her bags for the Bayou City. A year later, she transferred to HVI where she works today.

Oxley counts herself fortunate to have the opportunities she does. As an RN, her schedule is three days a week so she can work with the foundation on her vacations and in her spare time.

Oxley is currently director of operations and a volunteer with the Dive Pirates. The foundation supports, trains, equips and provides dive travel to individuals with mobility problems through the Classified Scuba Diving program established by Scuba Schools International. The all-volunteer status of Dive Pirates assures that everyone involved shares a heartfelt desire to extend the joy of diving to the disabled community.

The group works with individuals ages 12 to 65 with mobility disabilities ranging from muscular sclerosis, spinal injury or vision and hearing impairments, to amputations or rheumatoid arthritis. The recipient group each year includes predominantly military personnel wounded in current or previous wars, but also retired military who were injured after returning. The group also caters to civilians who were involved in some sort of tragedy.

The foundation has about 15 recipients per year and has trained about 120 people within the past 11 years, striving to meet a strong demand as their 2016 student list is already filling up fast.

“Scuba is an amazing therapy for our divers,” Oxley said. “It gives them freedom and weightlessness. They don’t feel pain as the pressure of the world is removed; it empowers them as it’s a challenge they succeed in and overcome. The foundation is a family and a support team for them.”

Oxley said every aspect of working with the recipients is rewarding. As a diver and instructor she loves to see an individual’s face after the first dive. “The smiles they share become engraved in your mind,” she said. “It’s hard work diving with these individuals because you must do most things for them. But when you see that smile, that laughter, that glow and happiness – it’s priceless.”