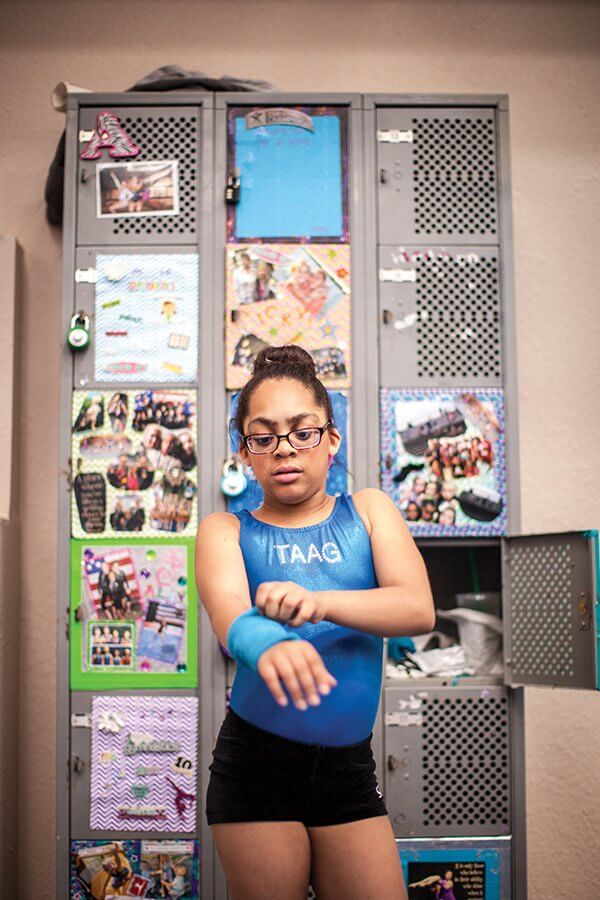 Adrianna salutes the judges’ table and mounts the balance beam. She pauses briefly to raise both hands before beginning a series of judiciously rehearsed cartwheels and handstands, executing each until she hears the punctuated thump of a perfect landing. Amid cheers, her gaze shifts once more to the judges’ table and she smiles, though she can barely make out their faces. Diagnosed with congenital glaucoma as an infant, Adrianna, who is now 12 years old, is legally blind.

“We could tell something was wrong really early on,” recalled Asha Kenebrew, Adrianna’s mother. “She was so sensitive to light. Her eyes would water a lot, and she was very uncomfortable whenever we took her outside. When I voiced these concerns to her pediatrician, I remember she checked her eyes three different times and then told us to go straight over to Texas Children’s Hospital, that there was a pediatric ophthalmologist waiting for us there. They determined that night that she had glaucoma.”

A rare disease of the eye affecting children at birth, congenital glaucoma is characterized by abnormally high intraocular pressure, or pressure within the eye. The disease originates from an imbalance in the mechanisms responsible for circulation; in a healthy eye, fluid flows in and out through a network of cells and tissues, but with glaucoma, the fluid does not drain properly, causing pressure to accumulate. The buildup of pressure often causes permanent damage to the optic nerve, resulting in varying degrees of vision impairment.

Symptoms of the disease include photophobia, or light sensitivity, excessive tearing, and involuntary closure of the eyelids, known as blepharospasm. If diagnosed and treated early, congenital glaucoma does not always lead to vision impairment, and many pediatric patients will not experience lasting symptoms. If suspected, parents should contact their pediatrician immediately so any pressure inside the eye can be relieved as soon as possible.

Despite detecting her glaucoma at just four months old, Adrianna’s disease has been aggressive and difficult to treat. As an infant, she underwent multiple surgeries to relieve the intraocular pressure and has since completed numerous additional procedures including shunt implants and various incisions designed to drain the excess fluid from her eyes. She has subsequently developed cataracts, had an additional surgery as a result, and follows extensive maintenance and treatment guidelines including the use of three different eye drops, twice a day. Just this past October, after an unexpected further deterioration in her sight, she underwent a laser procedure to help suppress her eyes’ fluid production.

“She’s responded very well to this last surgery and her vision is definitely better than before, but there was a long healing time associated with it,” said Kenebrew. “The crazy thing is, throughout all of this, she hasn’t let anything get in the way of her gymnastics. After the laser procedure, she was using dilating drops for a month, but even with her eyes dilated she still competed and went to her state qualifier meet.”

Of course, Adrianna’s persistence was no surprise to her parents. At just four years old, she already knew she wanted to be a gymnast after watching competitions on television. She begged her mother for lessons, and a few short years later found herself in her very first gymnastics class at the Texas Academy of Acrobatics and Gymnastics.

“She really wanted a balance beam and she wanted to do the uneven bars, and we’ve never really said, ‘You know, I don’t think you’re going to be able to do that because you can’t see,’” said Kenebrew. “We haven’t done anything special, we just never held her back. We didn’t want there to be any regrets, where we wished we would have let her try something.”

Originally, Kenebrew never planned on enrolling her daughter in competitions, but Adrianna showed a precocious interest in the sport and has consistently surprised both her parents and coaches with her capabilities.

“Every time she gets to a new level, her coaches say, ‘How is she going to do that? How will she see to jump to the high bar?’ But she just does it,” said Kenebrew.

No one is more impressed than her physicians, who grasp both the clinical and practical challenges the ambitious 12-year-old—who wears customized glasses and uses a special magnifying machine to help her at school—faces.

“Glaucoma narrows the visual field, so in addition to being extremely nearsighted, she has poor peripheral vision,” explained Kimberly G. Yen, M.D., Adrianna’s pediatric ophthalmologist at Texas Children’s Hospital and associate professor of ophthalmology and pediatrics at Baylor College of Medicine. “She can only make out the large ‘E’ on the top of the eye chart and maybe one or two additional letters under that, in one eye. Most people think of gymnasts as having very good vision so they can land on the balance beam and grab the bars, and certainly you would think that peripheral vision is important as well. I think it’s incredible that she’s been able to compensate and, despite her visual disability, be a competitive gymnast.”

In typical Adrianna fashion, overcoming these colossal obstacles to be a competitive gymnast is not enough—she’s planning to be a great one. In 2013, Adrianna was awarded the Texas Amateur Athletic Federation (TAAF) Female Athlete of the Year for her region in recognition of her work ethic, personality, teamwork and skill. She competed in the TAAF State Meet in May and will train with USA Gymnastics in the fall. Ultimately, she hopes to earn a spot on Team USA, traveling with an elite group to a dazzling new stadium in matching red, white and blue, to compete in the Summer Olympics.

After coming this far, it’s not difficult to imagine Adrianna on television, with millions of young girls watching her expertly executed routines, some of them turning to their parents and, despite their own obstacles, begging for lessons.

She’s living proof, after all.

“She’s an inspiration,” said Yen. “Everyone has deficits, and it doesn’t matter what they are, you just have to learn to work with the things you have been given, and she’s done a great job of that.”