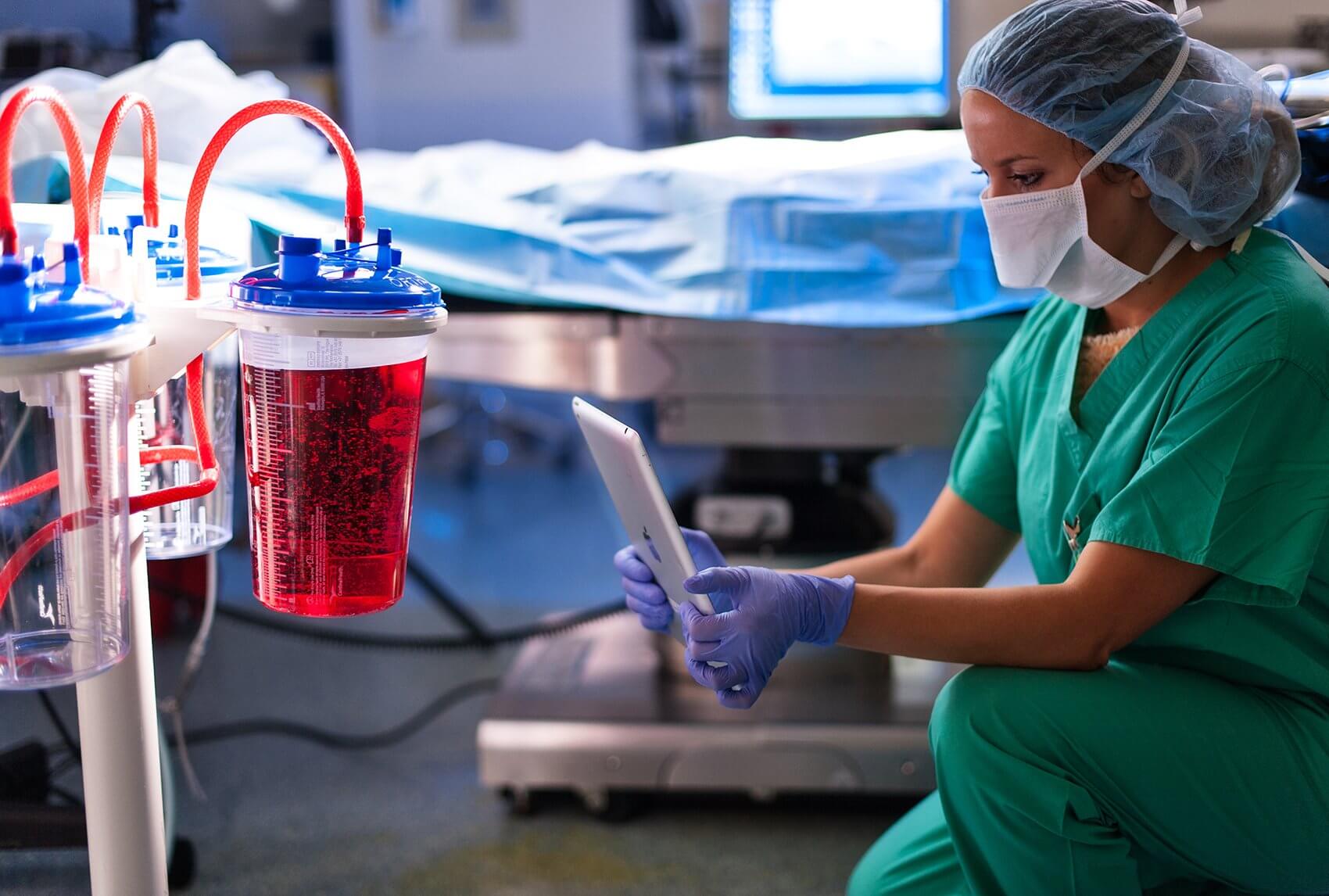 The frenetic ballet of an operating room during surgery is constantly in motion. The metronomic beep of monitoring equipment sets a steady tempo for surgeons, physician assistants, nurses and anesthesiologists as instruments dance and split-second decisions are made. From pulse oximeteres—devices that attach to a patient’s fingers like Band-Aids and measure the amount of oxygen contained in the blood—to electrocardiograms, vital information is conveyed through a wide range of monitoring equipment. Unfortunately, one area of measurement relies on less technologically advanced practices: surgical blood loss.

“Right now, the conventional method for measuring blood loss during surgery is pretty much a combination of visual estimation and gestalt,” said Siddarth Satish, founder and chief technology officer for Gauss Surgical. “Humans aren’t very good at visual estimation, so it’s a number that they come up with as a way of making sense of the decisions that they’ve made. Oftentimes, they’ll actually give the patient two units of blood, and then see if their blood loss was two units. It’s kind of a circular process, where they’re making the assumption based on how much was transfused.

“Another way that people have done it is to weigh the sponges,” he added. “You literally have nurses grabbing these bloody, soaked sponges and putting them on the baby scale in the operating room or the delivery room and trying to estimate how much is on there. The problem, much like with visual estimation, is that there’s a lot of other fluid on the sponges. It ends up being very inaccurate, pretty laborious and kind of messy.”

Not to mention, costly: 20 to 60 percent of blood transfusions are reported as unnecessary, driving a $10 billion burden on the U.S. health care system each year. Pushing back against the pervasiveness of “eyeballing,” Gauss Surgical, one of the 22 companies populating the inaugural class of the TMCx accelerator, aims to set a new status quo by leveraging mobile technology to monitor surgical blood loss in real-time.

Using the iPad’s camera function, their technology—a portfolio of products known as the Triton System—can accurately estimate blood loss in both surgical sponges and blood-bearing canisters, giving clinicians a better picture of overall surgical blood loss. Capturing images of either the used sponges or surgical canisters, the system sends the images to a cloud where sophisticated algorithms estimate the hemoglobin content and overall blood loss—regardless of complicating factors such as irrigation fluid, ambient lighting variations and hemolysis (red cell rupture).

“The way the technology works is that the nurses will throw the sponges used during surgery into a kick bucket, and then they have to go into a counting bag,” explained Marisa Molina, marketing associate for Gauss Surgical. “On the way into the counting bag, we just ask the nurse to hold up the sponge in front of the forward facing camera on the iPad. Then, they just tap a Bluetooth connected footpad to take an image, and they store the sponge according to their hospital standard procedure.”

The company received U.S. Food and Drug Administration (FDA) clearance for its Triton Canister App, the second core product in its Triton System portfolio, this past March. Currently, Gauss is in discussions to conduct several pilot studies of their technology at organizations within the Texas Medical Center.

“We hope that Gauss provides the ability to tell us, in real-time, how much blood we’re losing,” said Alan B. Lumsden, M.D., medical director of the Houston Methodist DeBakey Heart & Vascular Center. “The idea that we’re going to get real-time feedback is very appealing in terms of providing input for not only the surgeon, but also the anesthesiologist who is usually the one trying to make quantitative decisions about whether or not to transfuse a patient. That’s pretty significant.

“One of the things that I was concerned about is the fact that our circulating nurses already have a lot to do,” he added. “The technology wasn’t going to work if it entails a huge amount of additional work. Luckily, it’s actually fairly easy and intuitive. It might actually reduce the amount of work done in the operating room.”

According to Satish, their devices require minimal training and seamlessly integrate into the existing ebb and flow of the operating room’s workforce. They are currently being implemented at Cedars-Sinai Medical Center, UC Irvine Healthcare, the Memorial Care Health System and other leading institutions around the United States.

“It’s great to hear that our technology is factoring into clinical judgment in a way that we can’t even control, predict or market,” he said. “We’re really just marketing a tool that’s significantly more accurate. It’s a new parameter, but at the same time it’s a parameter that’s in every single medical record. It’s all about making surgery more careful.”