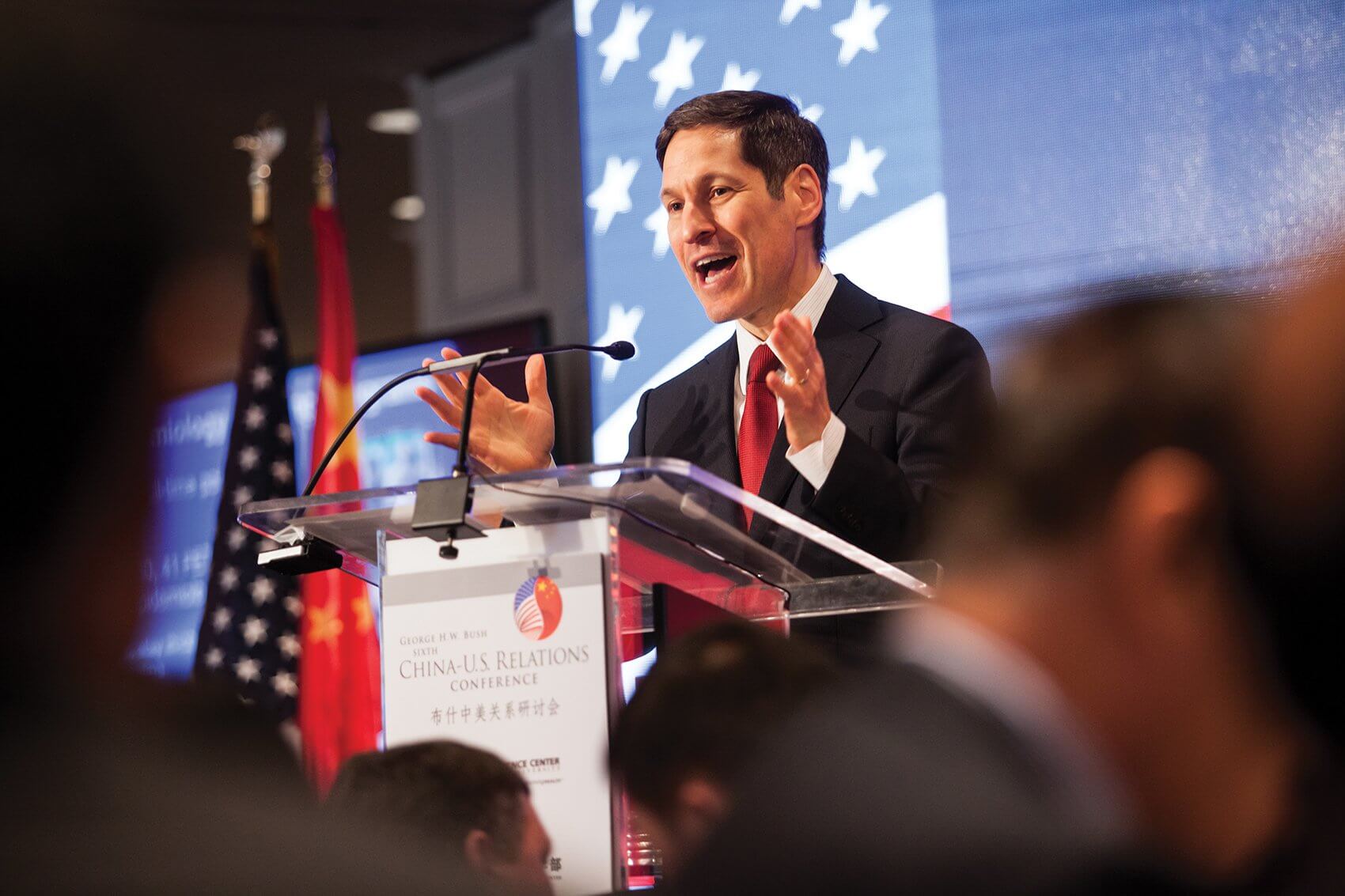 On the morning of May 12, the pitch-perfect voices of the Texas A&M University Singing Cadets filled the Phantom Ballroom at Houston’s Hotel ZaZa with the sound of the National Anthem of the People’s Republic of China. The serenade was immediately followed by the Star-Spangled Banner, thus formally commencing the opening ceremony for the 6th George H.W. Bush China-U.S. Relations Conference, which took place at the hotel over the course of three days.

Hosted by Texas A&M Health Science Center (TAMHSC) and Chinese People’s Association for Friendship with Foreign Countries, and co-hosted by Peking University Health Science Center, Texas A&M University, and the Texas Medical Center, the conference was attended by an elite group of representatives that included physicians, researchers, policymakers, government officials and leaders in the public, private and academic sectors from China and the U.S.

The formal symposium, which was first held in 2003 under the leadership of President George H.W. Bush, works to advance his vision and legacy of establishing better understanding, closer ties and collaboration between the two countries. By concentrating on issues surrounding prevention, preparedness and response regarding global infectious diseases, this year’s event marked the first time the traditionally broader diplomatic meeting focused on one specific, actionable topic.

“Microbes respect no national boundaries, no political affiliations and no ethnicities,” said Brett Giroir, M.D., chief executive officer of TAMHSC, who served as moderator for the conference. “Given today’s global connectivity, an epidemic anywhere will rapidly become a threat everywhere.”

That threat—be it Ebola, MERS, SARS, drug-resistant tuberculosis, bioterrorism, pandemic influenza, or a host of lesser known microbes and viruses—served as the springboard for the keynote addresses, plenary panels and roundtable discussions that took place over the course of the gathering. Ultimately, the goal was to not only create potential solutions and strategies for moving forward, but to also establish new networks for ongoing collaboration between industry leaders in the U.S. and China.

“The point of this conference is to develop a sustainable, close tie between the two most powerful and influential countries on earth so that we can act more efficiently and effectively in preventing and responding to an outbreak of infectious disease,” said Neil Bush, son of George H.W. Bush and a co-chair of the conference.

Robert C. Robbins, M.D., president and CEO of the Texas Medical Center, added, “While the conference provides many opportunities for collaboration and cooperation between clinicians, scientists and educators around important issues such as emerging pathogens and emergency preparedness, it also promotes discussion on other topics critical to health care today, including cancer genomics and cardiovascular diseases.”

The event was co-chaired by Bush and Madame Li Xiaolin, president of the Chinese People’s Association for Friendship with Foreign Countries, and featured several of the world’s most renowned scientists and policymakers. Participants were encouraged to share their experiences on social media using the hashtag #endpandemics to increase awareness of the issues discussed, and both Chinese and English translation services were available at all sessions.

The dialogue addressed many facets of the issue at large, including vaccine development, policy guidelines, ethics, research advancement, the role of commercialization and corporate programs in promoting global health security, insights from the front line of the Ebola outbreak, and more. Roundtable symposia provided the opportunity for attendees to convene and review the critical role of research collaboration between China and the United States. Each roundtable encompassed multiple sessions, giving participants time to outline an agenda for future collaboration in science and policy for the topics addressed, which ranged from new tuberculosis diagnostics to mobile health technology to natural remedies and products.

One of the predominant themes of the conference was the importance of assisting less developed countries in the global fight to promote health for the poorest populations.

During a plenary session focused on public health preparedness in the developing world, and how China and the U.S. could provide leadership, Nils Daulaire, M.D., senior visiting scholar on Global Health Security at the Norwegian Institute of Public Health and U.S. Representative to the Executive Board of the World Health Organization, discussed the policy roles of the two countries in developing ongoing and robust programs at home while assisting less developed countries as a whole—and not just when a pandemic strikes.

“Sometimes, curing and preventing infectious diseases means more about economic development than it does a specific vaccine. There can never be global economic development until we release the poorest 1.5 billion people on the planet from the traps of poverty and illness.” — Brett Giroir, M.D., Chief Executive Officer of Texas A&M Health Science Center

“The bottom line is that we’re in this together,” he said. “We’re talking a lot about pandemics and global infectious diseases, but we also recognize that the emerging health issues in the least developed countries is this overlap of two great sets of issues. One is what I call the unfinished agenda—maternal and child health, infectious diseases, the spread of anti-microbial resistance—and that is an area that requires ongoing attention, assistance and work, but on top of that, we now have emerging, throughout the world, the non-communicable diseases catastrophe.”

Classified under this umbrella are the exploding rates of cancer, heart diseases, chronic lung disease and diabetes.

“We recognize that while we call them non-communicable diseases, they are, in fact, communicable. I call them socio-communicable diseases, because they are spread from society to society, often from rich western societies to some of the poorer societies,” Daulaire explained. “The drivers there are not just the health interventions, but what we call the social and economic determinants of health. Trade policy is relevant, economic development priorities, the ways in which food is processed and distributed and used—all of these things need to be a part of our common dialogue between the two strongest economies in the world in order to help protect those that are less fortunate than we are.”

Peter Hotez, M.D., Ph.D., who serves as U.S. Science Envoy (North Africa and Middle East), dean of the National School of Tropical Medicine at Baylor College of Medicine, professor of pediatrics and molecular & virology and microbiology and head of the Section of Pediatric Tropical Medicine at Baylor College of Medicine, Texas Children’s Hospital Endowed Chair of Tropical Pediatrics, and director of the Sabin Vaccine Institute Texas Children’s Hospital Center for Vaccine Development, expanded on Daulaire’s remarks and stressed the importance of addressing poverty in the context of global health.

“If you look at poor people across the planet, every single poor person living in poverty has at least one neglected tropical disease,” Hotez explained. “We all know about Ebola, but the rest are what I call the most important diseases you’ve never heard of. They occur in the setting of poverty and they also cause poverty. Many of these neglected tropical diseases and chronically debilitating infections actually shave IQ points off children. We’ve shown that hookworm actually reduces your future wages by 40 percent, that many of these diseases make individuals too sick to go to work, or they affect the health of girls and women—the point is that every single person living in poverty has them, and these are the stealth diseases that trap the bottom 1.5 billion people in the world in this vicious cycle of poverty.”

Giroir echoed these sentiments in a later session. “Sometimes, curing and preventing infectious diseases means more about economic development than it does a specific vaccine,” he said. “There can never be global economic development until we release the poorest 1.5 billion people on the planet from the traps of poverty and illness.”

Thomas Frieden, M.D., director of the U.S. Centers for Disease Control and Prevention (CDC), who delivered one of the keynote addresses, focused on the Ebola outbreak in West Africa and the importance of early intervention and preparedness in the future, including an increased focus on biosafety and security, immunization, surveillance of zoonotic diseases in humans and the growing threat of antimicrobial resistance. By utilizing surveillance technology, lab-work and enhanced information systems, and increasing disease detectives and other public health staff throughout the world, Frieden explained that nations could respond more rapidly and effectively

to the emerging and ongoing public health crises. He encouraged conference attendees to commit resources to field epidemiology training programs and national public health institutes throughout the world.

“It would be wonderful if one of the collaborations between the U.S. and China would be to help strengthen, identify and support national public institutions like CDCs in countries in Africa and Asia and all over the world, because they provide the sustainable basis for keeping people safe,” Frieden said.

That the prestigious international conference was set in Houston, in the middle of the Texas Medical Center, was no coincidence. For one, TAMHSC is home to the Texas A&M Center for Innovation in Advanced Development and Manufacturing (CIADM), one of only three centers in the country established as a public-private partnership with the U.S. Department of Health and Human Services to help ensure the development and production of lifesaving vaccines and therapies in the event of a pandemic or other national emergency. Even more, Houston is famously driven by innovation in medicine, and it is only fitting that some of the world’s most celebrated scientists and policymakers would convene here to collaborate on such pressing issues.

“We are known as an oil and gas capital, and that is still very much a part of who we are as a city and what fuels our economy,” said Mayor Annise Parker during the opening ceremony. “But the single biggest destination for foreign visitors to Houston is the Texas Medical Center—as doctors, as researchers, as patients, as thought leaders—and in our examination of what we are as a city, we’ve discovered some things: oil is what drives our economy, space is what fuels our imaginations—because we are the home of NASA and the astronaut corps—but medicine is our future.”