The Museum of Fine Arts, Houston unveils the designs for a dramatic redevelopment of its campus 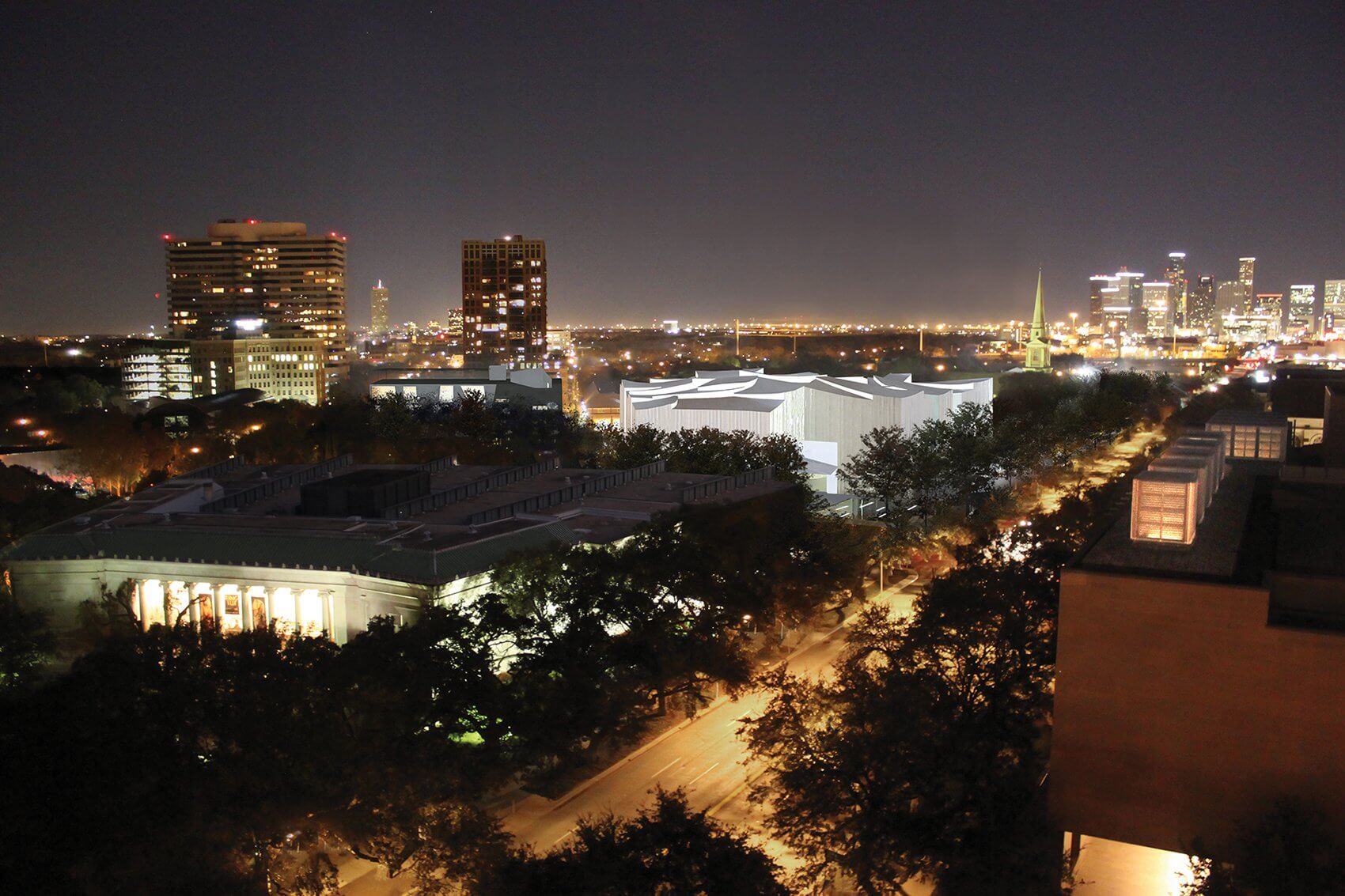 The year is 2019. Punctuated by a chorus of chirping birds and the shuffle of eager footsteps, visitors to the Museum of Fine Arts, Houston (MFAH), prepare for a full day. At the heart of the recently completed Fayez S. Sarofim Campus, a translucent exhibition building, allowing natural light to illuminate the three-tiered atrium within, rises up in complimentary contrast to the black steel and limestone structures across the street—once the sun sets, the building will emit a soft, mesmerizing glow. Seven vertical gardens peppered around the exterior of the building evoke a lush, urban oasis. From atop the reimagined Glassell School of Art building, a trellised roof garden allows visitors a privileged perspective for viewing the interconnected campus.

That vision is steadily becoming reality. This past January, the MFAH revealed designs for a striking redevelopment of its 14-acre campus. Consisting of a unifying master plan, a 164,000-square-foot building for largely unseen 20th and 21st-century works of art and a new, 80,000-square-foot home for the Glassell School of Art, all conceptualized by Steven Holl Architects— as well as the preliminary concepts for a state-of-the-art conservation center by Lake Flato Architects—the campus is beginning to take shape.

The project, which will begin later this year and is slated for completion  in 2019, will transform the MFAH, as well as its surrounding neighborhood, marking a major contribution to Houston’s increasing emphasis on enhancing the pedestrian experience of the city. More than $350 million of the MFAH’s $450-million capital and endowment campaign goal has been raised to date, primarily from Houston-based philanthropists.

“This newly unified campus will allow us to reshape and reinvigorate the museum experience,” said Gary Tinterow, director of the MFAH. “I think it will also position the museum to participate in the future of Houston’s civic life in ways that are welcoming to everyone—both regular museumgoers and first-time visitors alike.”

Housing a collection that now spans 6,000 years of artistic expression and embedded among a rich architectural tapestry, the MFAH has solidified its status as a cradle of culture. Enhancing that foundation, the new structures will be carefully knit into the fabric of the campus—one already marked by architects William Ward Watkin, Ludwig Mies van der Rohe and Rafael Moneo, as well as a sculpture garden by Isamu Noguchi. Overarching landscape plans will unify these distinctive elements, from modernist steel and glass to neo-classical limestone, to create new public spaces and cultivate an accessible urban campus.

“A luminous glass building will anchor the northeast corner of the campus, rising up across the street from the black steel of Mies van der Rohe’s Caroline Wiess Law Building and the limestone of Moneo’s Audrey Jones Beck Building,” said Tinterow, referring to the 164,000-square-foot Nancy and Rich Kinder Building. “We’ll finally have a space for the largest, and fastest-growing part of our collection: 20th- and 21st-century art. That’s going to be an enormous change, allowing us to show the great strength of our collection in photography and 20th century design and our growing strength in Latin-American art, as well as modern and contemporary painting and sculpture.”

“As you come in and move through the building, everything will be day-lit in the open lobby,” explained Willard Holmes, chief operating officer of the MFAH. “But as you move up to the higher galleries, the light will transition into a more modulated light for items that are light-sensitive, like photographs and paintings in watercolors. Rising to the top galleries, you’ll have natural light, but in this case it will be coming in from the top.

“One of the most dramatic features of the building is that it’s going to be clad in translucent glass tubes that will provide a kind of soft, glazed surface,” he added. “In the evening there will be lighting behind those so that it will actually glow.”

The first building to be fully realized, the Glassell School of Art, will extend the landscape of the campus while animating newly created public spaces—such as the Brown Foundation, Inc. Plaza, which includes a stepped amphitheater leading up to a walkable roof garden. A three-story facility complete with a street-level café, it will replace the school’s existing 35-year-old building.

“We’re trying to have a school that is open, flexible and forward compatible,” noted Holmes. “As technology evolves and as artists start looking at emerging techniques and strategies, we want the school to be able to respond to that.”

The third major component of the new campus—the Sarah Campbell Blaffer Foundation Center for Conservation—will bring the museum’s conservation teams together in close proximity to the museum for the first time. Set atop the museum’s existing parking garage, the project will consolidate operations previously dispersed between the MFAH and a facility several miles away.

“Right now, we’ve got a great conservation department but it’s working in cramped quarters about five to six miles from campus, so that when curatorial research is being done, it requires a real effort,” admitted Holmes. “By moving conservation to the center of the museum, it means that their kind of work is less like a paramedic coming to the scene of an accident and more like a family physician. It makes them central to the entire continuum, integrating that conservation into the day-to-day culture of the museum.”

More a series of interconnected nodes than a collection of fragmented structures separated by unruly freeways, the new campus won’t discriminate against visitors on foot. A key element of Steven Holl Architects’ master plan was the idea of submerging all parking below ground—totaling 200,000 square feet in two underground garages—freeing up space on the campus for both the new buildings and outdoor gathering places. A new, dedicated tunnel will guide visitors between the Nancy and Rich Kinder Building and the Mies building. With the existing Wilson Tunnel—housing artist James Turrell’s installation, “The Light Inside”—between the Mies and Moneo buildings, the campus will be fully connected below ground.

“Houston has experienced incredible growth over the last 20 years, and the Museum of Fine Arts, Houston, has grown rapidly with the city,” said Annise Parker, mayor of Houston. “The Museum has embraced other parts of the world, in its collections and in its programs, and so it has become more and more a reflection of the breadth of this city. The redevelopment of the campus and the resulting increase in public access to art and programming will further enhance the Museum’s service to the city.”

“I feel truly privileged to be a participant in and collaborator on what will be one of the most memorable projects in Houston’s history,” concluded Tinterow. “I am absolutely certain that our museum will be recognized as one of the most beautiful in America. For our visitors, the Museum of Fine Arts, Houston, will become a place of wonder and inspiration; for our staff and students, it will be a place of creativity and innovation; and for our community, it will be Houston’s hub for all things cultural.”