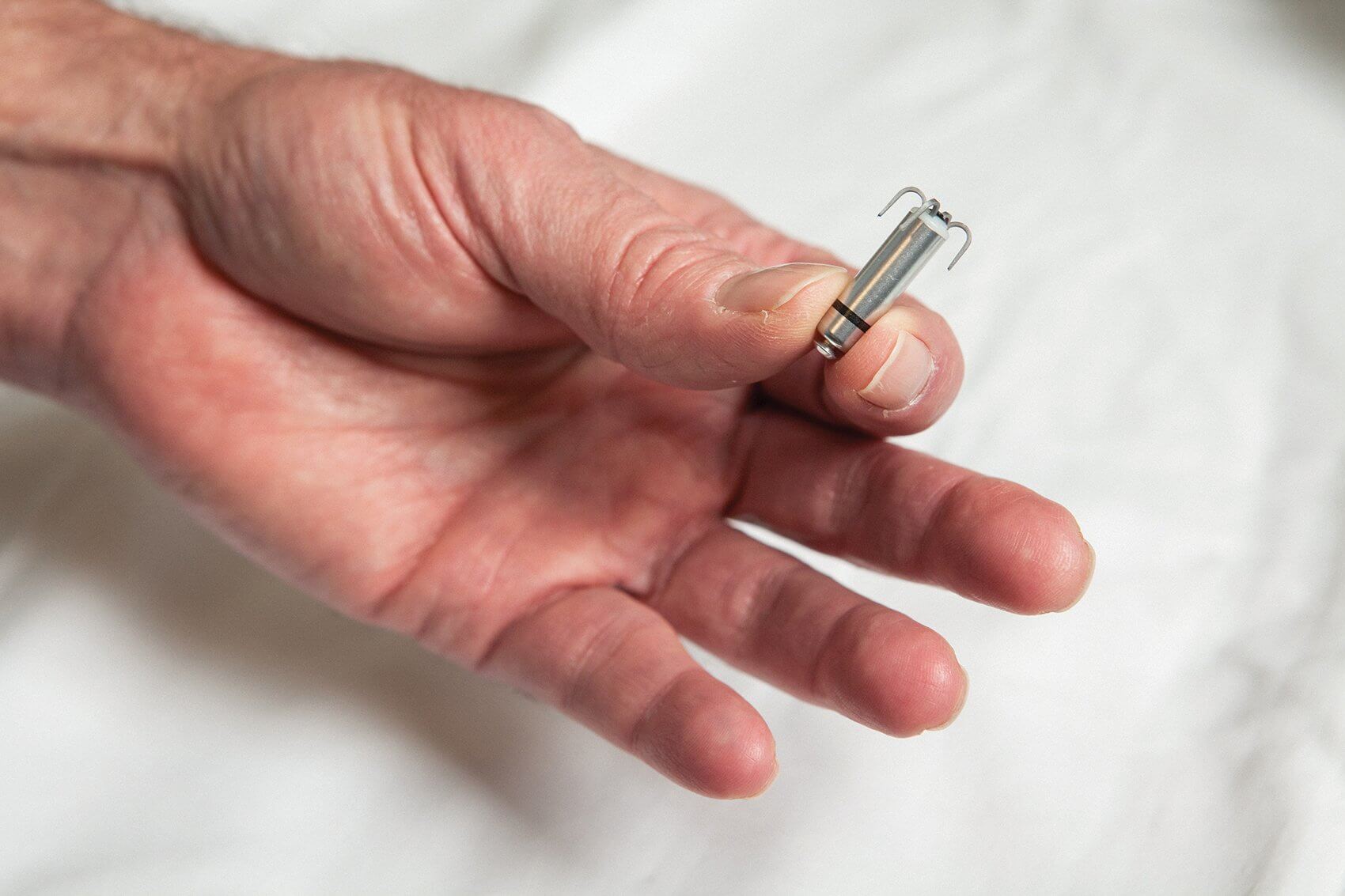 The miniaturization of our world is relentless. Clunky and cumbersome technology is increasingly replaced with sleek and streamlined versions, from laptops and cell phones to burgeoning developments in nanotechnology. In the domain of cardiac pacemakers, where current devices are visible outside the chest and wires have the potential to cause blood clots or breed bacteria, smaller might really be better.

CHI St. Luke’s Health-Baylor St. Luke’s Medical Center recently announced that it had become the first hospital in Houston to implant the world’s smallest pacemaker—the Medtronic Micra Transcatheter Pacing System (TPS), which was implemented as part of a pivotal global clinical trial. Baylor St. Luke’s Medical Center remains the only hospital in the Houston area selected to participate in the trial.

“Everything in the industry is changing,” said John Seger, M.D., a cardiac electrophysiologist at the Texas Heart Institute at Baylor St. Luke’s, who implanted the Micra transcatheter pacemaker. “With technology, things are not just getting smaller—they’re becoming more efficient.”

With an elegant design that looks like something straight out of a science fiction movie—small tines protrude from the top of the cylinder, resembling metallic tendril that attach to the meshwork of muscle bands within the heart—the Micra is less than one-tenth the size of a conventional pacemaker. Comparable in size to a large vitamin, it’s delivered directly into the heart through a catheter inserted into the femoral vein.

“The most striking thing about this device is that it doesn’t actually have any wires in it,” explained Seger. “When we put it into the heart through the leg, we use sheaths as delivery tools without ever having to open up the patient’s chest—we can perform this procedure in a relatively uncomplicated manner.”

Leveraging the understanding that all veins lead to the heart, the miniature Micra securely attaches to the heart wall once positioned, where it can be readjusted or retrieved, if needed. Once in place, the pacemaker delivers electrical impulses through an electrode located at the end of the device prompting the heart to beat at a normal rate.

“In basic terms, pacemakers do several things,” explained Seger. “Their primary role is to ensure that the heart rate doesn’t get too slow. We know that there are different diseases that can influence the conduction and electrical systems of the heart, intermittently impeding its ability to start generating impulses, which can cause people to faint abruptly or become unable to do their normal activities without feeling dizzy or short of breath when trying to exert themselves.”

According to Seger, traditional pacemakers have two components: the hardware and software of the device itself and the connecting wire, known as the lead, that attaches it to the heart. A small incision is made to access the subclavian vein, located under the collarbone, to thread the lead through to reach the inside of the heart’s right ventricle. The lead is either actively fixed by screwing it to the bottom of the heart or passively attached with a grappling hook mechanism.

There are several distinct disadvantages associated with that type of system.

“First and foremost, you need to have access,” said Seger. “Some people might have congenital abnormalities where their veins aren’t available, while others may have undergone radiation therapy that necessitated frequent IVs and their veins are clotted as a result.

“We know that the wires can create their own problems,” he added. “They can clot the vein itself, which renders the vein unusable for other purposes. They can also serve as a nidus for infection. We know that a small number of pacemaker wires become infected after they’ve been in patients for a while.”

With that in mind, practitioners have been scanning the horizon for emerging technologies that might circumvent some of those issues.

Standing in stark contrast to the current pacemaker implantation procedure, installing the Micra doesn’t require a surgical incision in the chest, nor does it create a “pocket” under the skin. Removing any visible signs of the device, as well as eliminating a potential source of complications, are attractive incentives for pacemaker patients.

“I’ve never thought of myself as a typical pacemaker person,” admitted Betty Funk, who received the Micra TPS in January of this year, becoming the first patient in Houston to have the procedure performed. “I’ve talked to other people who have pacemakers, and it worried me that a pacemaker might wake me up at night. But the Micra hasn’t at all.”

Funk, 62, has suffered from two strokes over the past few years, which led to the realization that her heart had a tendency to stop beating for short intervals at night—up to 20 seconds, at the most.

“Needing a pacemaker was a little bit of a surprise for me, even in the aftermath of those issues,” she said. “Initially, I thought I was going to receive the traditional type of pacemaker, but Dr. Seger asked if I wanted to participate in this study. My husband and I were both on board. I didn’t really have many reservations—it was something new and it was an opportunity for us.”

After a brief procedure—30 to 40 minutes—Funk was up and moving that same day. “I had to spend the night, but I can’t complain about anything, really,” she laughed. “I don’t remember any big restrictions, but I did take it easy for a couple of days following the procedure. The only thing that really affected me was when they told me I couldn’t take a bath for 10 days—I like to take baths, so that was the worst part!”

In spite of the success of Funk’s experience, Seger noted that there are still some potential risks associated with the Micra’s innovative approach, which are being evaluated in the clinical trial. “It’s a little different from the risks associated with a traditional pacemaker procedure,” he said. “These devices require delivery systems, which may disrupt the structural integrity of the heart. We have the capability to remove them in the first several months, but after they’ve grown in, we install another device if needed.”

Fortunately, the future may be bright for the tiny transcatheter pacing system. While the current Micra TPS design allows practitioners to regulate pacing solely in the lower chamber of the heart, those boundaries are being tested.

“The future of this technology will likely allow us to put small devices in multiple chambers of the heart,” said Seger. “These devices will be able to communicate with each other—instead of being connected physically, they’ll be connected through different types of frequencies so that when one beats, the other can beat synchronously. These may even be able to communicate with something that we implant under the skin, such as a defibrillator. There’s no question that this is the direction that the field is headed, and it’s going to completely change what we do.”