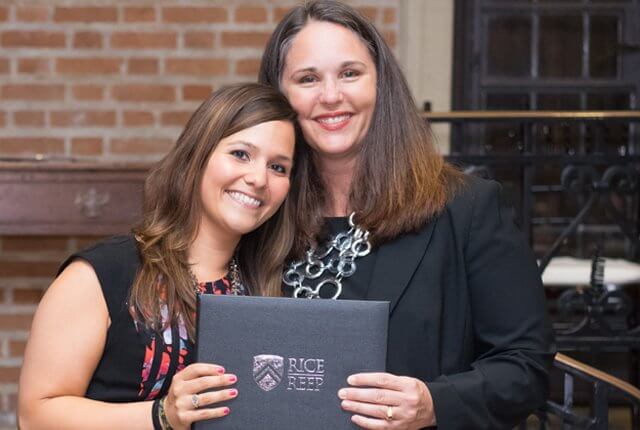 With this month marking the five-year graduation anniversary of the Rice University Education Entrepreneurship Program’s first MBA cohort, the growth of the program’s impact across Houston’s K-12 schools has been both rapid and widespread.

Founded in 2008 as part of Rice’s Jones Graduate School of Business, the program known as REEP is the country’s foremost leadership development program for highly motivated educators committed to leading public schools, according to Andrea Hodge, REEP’s executive director.

Over the past seven years, REEP has developed more than 280 current and aspiring school leaders from 13 school districts and two charter management organizations. The 139 principals who have completed REEP are currently serving 143,000 students in the Greater Houston area. The program views the role of a school principal as that of a CEO who deploys capital, both human and financial, to meet the needs of the community, Hodge said.

Eldridge Gilbert, a member of the program’s first MBA cohort and school director at YES Prep North Forest, said his perception on leadership has changed as a result of participating. “It (REEP) made me realize how important it is to have smart, strategic, thoughtful people in leadership,” he said. “It definitely helped me realize how hard our work is.”

Founded in part through a donation from Houston Endowment, REEP allows full-time teachers and administrators to pursue either a two-year MBA or a one-year fellowship through the Jones School’s Executive Education training program. REEP complements a number of other Rice programs focused on improving the quality of education in the Houston community, Texas and the country.

The benefits of going through the program have been multifaceted, said Daniel Caesar, a member of the first cohort and head of schools at KIPP Houston Public Schools. “I became more connected to the Greater Houston community — both inside and outside of education — and was able to apply much of the MBA coursework, especially in organizational behavior and marketing, to directly improve the school system in which I work,” he said. “I have become a proponent of innovation and outside-the-box thinking.”

For Lauryn Cruz, a member of this year’s graduating cohort and a middle school English language arts lead at St. Francis of Assisi Catholic School, REEP’s executive coaching element was particularly impactful. “I oftentimes call my (REEP) executive coach my ‘thought partner,’” Cruz said. “Her impact was immeasurable, particularly in the second year as I sought new opportunities for leadership, growth and development. My executive coach served as both a mirror and a sounding board. She reflected back to me truths about myself, my leadership style, strengths and areas of growth that I oftentimes missed in my own reflection. She gave feedback on ideas or innovations I wanted to implement on my campus, planned and role-played critical conversations I needed to have or sometimes she would simply listen as I vented.”

Keri Wittpenn, also a member of this year’s graduating cohort and assistant principal at Jane Long Academy, seconded the value of the program’s executive coaching support. “REEP recognizes that burnout in educational leadership is a reality and strives to teach leaders how to combat it by taking care of personal needs,” Wittpenn said. “In the end, our executive coaches helped us craft our life script, which is a mantra that reminds us to take care of ourselves. Without taking care of ourselves, we cannot lead others.”

Despite its relative youth, REEP has quickly garnered national attention and recognition among peers and policymakers. It was selected as the 2013 winner of the global business school association MBA Roundtable’s Innovator Award, which acknowledges creative initiatives in MBA education and the institutions that are driving change in the field. In 2014, then-gubernatorial candidate and Texas Attorney General Greg Abbott highlighted the program in his “Educating Texans” policy plan.

“The power of REEP comes from building leadership capacity,” Hodge said. “Repeatedly, our students tell me that they think differently, they act differently and they get better results. We aren’t offering them the right answers; instead, we focus on them learning to ask the right questions.”

For more information about the program, visit https://business.rice.edu/reep.aspx.