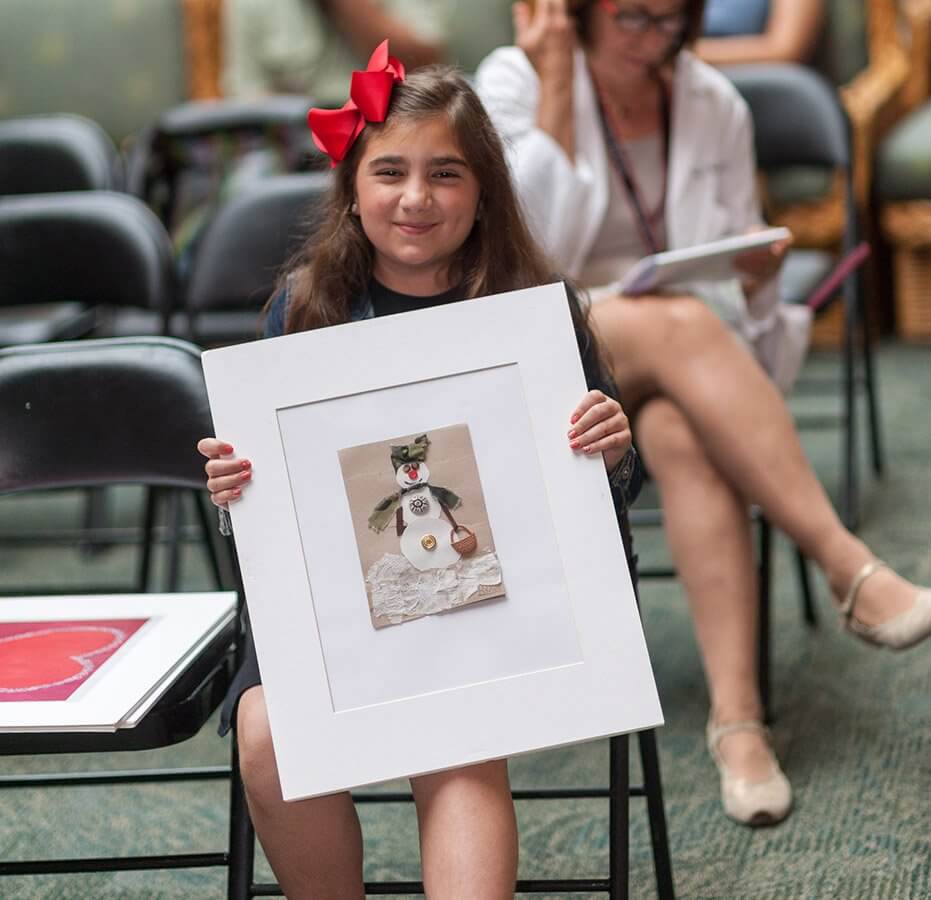 In 1973, a volunteer at The University of Texas MD Anderson Cancer Center saw artwork created by childhood cancer patients and suggested it would make a great fundraising Christmas card. Fast-forward over 40 years, and MD Anderson’s Children’s Art Project has since raised $31 million for patient programs at MD Anderson.

On May 21, the Children’s Art Project unveiled the artwork that will appear in the 2015 line and honored the young artists whose work will be featured on everything from greeting cards and calendars to Christmas ornaments and ties.

“Art is a therapeutic exercise,” said Shannan Murray, executive director of the Children’s Art Project. “This is a time in their lives when they don’t have a lot of control, and by being able to contribute to this and give back—it’s a very empowering thing.”

While this year will be the first time some of the artists are featured on Children’s Art Project products, others are veterans who have had numerous works of art selected over the years. Patients can submit art until they turn 19, even after they have left the hospital and gone home. Once a child has been a patient at MD Anderson, he or she is welcome to continue to submit.

As Murray said a few words about the works of art selected for 2015, the artists proudly stood on the stage, holding their creations.

“It’s really, really exciting,” said artist Leticia Torres. The 16-year-old, who likes to draw religious Christmas scenes and her favorite flower, cherry blossoms, said creating art was something to look forward to while she was undergoing treatment from 2009 to 2010.

“It’s a huge distraction from all the problems and struggles we go through with treatment,” said Torres, now a five-year survivor. “It’s an escape.”

“Sometimes when I get mad, when I draw it makes me happy and expresses my feelings,” said the eight-year-old, who was a patient last year. Sachs, who loves to draw princesses, stylish clothing and colorful hearts, created a fashionable mixed-media snowwoman to be featured on holiday products.

Sachs’ mother, Alicia Sachs, said the Children’s Art Project was an outlet for her “artsy” daughter while she was undergoing complicated procedures.

“When she had her surgery to have tumors removed, she had to be very sedentary, so she did a lot of artwork and we bought her a lot of paint colors,” said Sachs. “We had no idea it was going to turn into this until a couple of weeks ago when we got a letter in the mail saying her artwork was chosen. She’s very honored and excited.”

Murray described a complex selection process to determine which works will be included in the line each year. The Children’s Art Project collects votes from their direct mail and online customers, retail stores and their customers, and the corporations that buy products each year. MD Anderson employees and the public can also vote at various events. At this 2015 unveiling, additional artwork was on display so attendees could cast their votes for 2016.

Much of the featured artwork is created in art classes at MD Anderson. Leon Benavides, program coordinator of the Children’s Art Project, said they give the children ideas that correspond with the seasons, like flowers for spring and valentines in February, and then encourage them to let their creative juices flow.

“One of the best things about doing art is getting away from the every day experience of being in the hospital and going through the clinical procedures,” said Benavides. “We try to make it fun—we don’t talk about what’s going on as far as the medical stuff but more what they like to do when they’re home with their friends. We play music during art class and just have a good time.”

If artwork is not selected for a particular year, Benavides said it all goes into the archives and may get pulled out again for voting another year. As a result, a few of the artists honored at the 2015 event are over the age of 19, but were still children when they originally submitted their work.

This gives the young artists numerous opportunities to be featured and also the gives Children’s Art Project staff members a special opportunity to catch up with the artists. One former artist featured in 2015 is getting married in just a few short weeks; another recently received her master’s degree in health studies and plans to pursue a Ph.D. in health education. Seeing patients grow into happy, healthy adults is rewarding for everyone who works at MD Anderson.

“Watching the survivors of childhood cancer go on to real lives is incredibly satisfying, to see that we really are succeeding in letting these children have full lives,” said Cindy Schwartz, M.D., professor and interim head of the Division of Pediatrics at MD Anderson. “Sometimes when we’re in the trenches, we’re just trying to get children through the next day and the next week, and we don’t get to see them as much when they’re in their real lives.”

For the young artists who go through a lot of hardship during treatment, their experiences with the Children’s Art Project remain a bright spot in their time spent at MD Anderson.

“I do a lot of painting at camp, and sometimes at home I just draw,” said Torres. “But I never expected it to actually become part of the art project itself.”