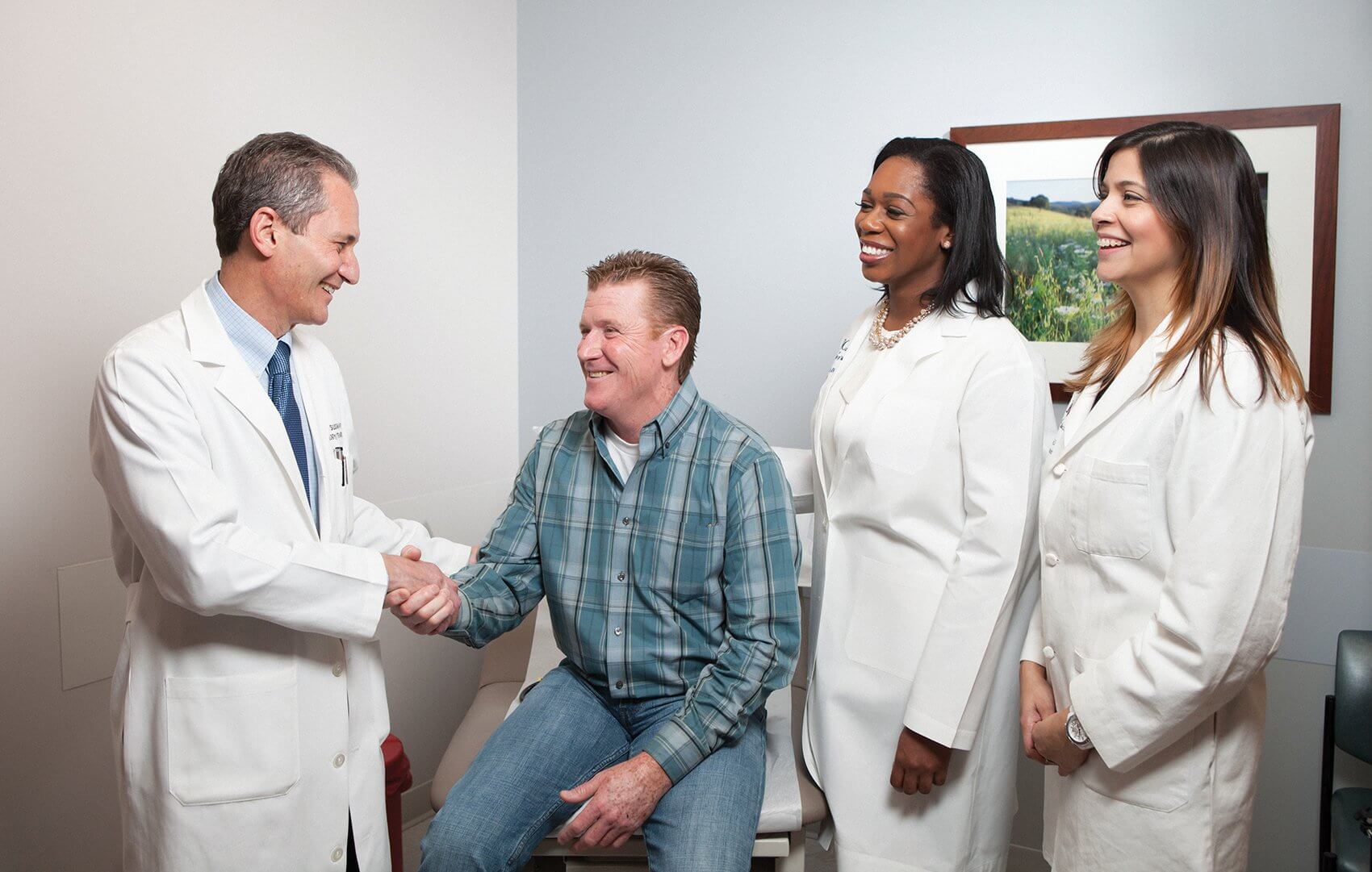 After a litany of routine tests in 2012, John Rocks heard news he never expected: “You have hepatitis C.”

Rocks learned he was infected with the virus after being treated for high blood pressure. With no insurance, his options were limited—until a chance encounter at a local doctor’s office led him to CHI St. Luke’s Health-Baylor St. Luke’s Medical Center’s new telehealth program, Project ECHO.

Project ECHO seeks to increase the accessibility of quality health care by allowing Baylor St. Luke’s experts to use video conferencing to mentor and train providers in communities throughout Texas, as well as a number of communities in Louisiana.

“Project ECHO originally started at the University of New Mexico,” said Norman Sussman, M.D., director of Project ECHO, and associate professor of surgery at Baylor College of Medicine. “The founder, Sanjeev Arora, M.D., faced a problem that many of us in medical centers face—getting access to patients who are underserved in receiving the best health care in terms of distance, finance and capability.”

When Sussman and his colleagues became aware of the project, they knew Baylor St. Luke’s would be an ideal place to begin their own Project ECHO to better treat patients suffering from illnesses, like hepatitis C, that often require specialist care. Tracking down those patients with hepatitis C was not a difficult task. Wayne Gosbee, outreach coordinator at Baylor St. Luke’s, had been providing free hepatitis C screening to patients for years. It was the next step—what to do when a patient tested positive—that proved complicated.

Prior to the launch of Project ECHO a little over a year ago, patients diagnosed with hepatitis C, either by Gosbee or by their own primary care physicians, would be referred to the experts at Baylor St. Luke’s for further treatment. Unfortunately, many of those patients would end up without further treatment, unable to make the trip to the Texas Medical Center for a variety of reasons, including a lack of funds, an inability to take time off of work, or even just sheer distance.

“There was a gap in care,” said physician assistant Renita Madu, one of the community care providers participating in Project ECHO. “Hepatitis C or cirrhosis would just be something they had until they had to go to the ER.”

Now, thanks to Project ECHO, Gosbee has a host of providers throughout Texas and Louisiana to whom he can refer hepatitis C-positive patients.

“Wayne finds the patients and says, ‘Where do you live? Oh, there’s a clinic nearby,’ and he refers them there,” said Sussman. “We communicate with that clinic and work on co-managing the patients. Number one, we’re getting patients treated closer to home. There’s no need to come here. Number two, the community providers become so sophisticated that they start to manage patients without us.”

“This is more telementoring than telemedicine. We’re teaching them how to treat these complex diseases they didn’t realize they could treat.” — SAIRA KHADERI, M.D., Associate Director of Project ECHO and Assistant Professor of Surgery at Baylor College of Medicine

That is the true beauty of Project ECHO. As Sussman and his colleagues emphasized, the goal is not to provide direct patient care, but to enhance patient care through the providers in the community.

“This is more telementoring than telemedicine,” said Saira Khaderi, M.D., associate director of Project ECHO and an assistant professor of surgery at Baylor College of Medicine. “We’re teaching them how to treat these complex diseases they didn’t realize they could treat. We’re reaching out to however many sites, but each one of those sites is treating 10 patients and it continues to expand from there.”

For Madu, Project ECHO has provided an opportunity to expand her skill set far beyond what she learned in school. Madu works as a physician assistant at a federally qualified health center affiliated with Baylor St. Luke’s.

“Project ECHO provided a way of getting the test from Wayne Gosbee and having access to these specialists who know so much about these medications,” said Madu. “I didn’t get trained specifically for hepatitis C, I was just general medicine. It was a way of broadening my knowledge base. It’s taught me a lot, and increased my confidence level. It’s a big deal.”

Madu is the provider responsible for treating John Rocks. After Rocks’ hepatitis C diagnosis, he had no idea where to turn. At the time, he barely even knew what hepatitis C was, let alone what his prognosis would be. Internet searches only increased his despair.

“I found out it will kill you—they called it ‘the silent killer,’” Rocks said. “I thought I was up a creek without a paddle. No money, no insurance. I’d just turned 50 years old, and to find out I had this disease? It was a shocker.”

Rocks suspected he contracted the virus from a blood transfusion after a motorcycle accident in the ‘80s. Having read a lot of dire information about hepatitis C online, Rocks headed to a local doctor’s office, where he spoke frankly with the receptionist.

“I said, ‘Well, ma’am, I don’t have any insurance. If there’s no cure, this is just like throwing my money away,’” he recounted. “She said, ‘You know what? Call this number.’”

The phone number belonged to Wayne Gosbee. After Gosbee confirmed Rocks’ hepatitis C diagnosis, he was referred to Madu’s clinic for further treatment and his case proceeded like any other in Project ECHO.

Lizette Escamilla, Project ECHO coordinator, sends email blasts to all providers connected with the program, like Madu, to let them know of scheduled hepatitis C clinics and to ask for patients to present. She sends forms to the providers, which cover information such as past medical history, time of diagnosis, any secondary complications and complete blood counts.

“I create the agenda and the providers are placed in the queue to present their cases one by one. We’ve had from 12 to 20 up on the screen for hepatitis C,” said Escamilla. “One presents at a time, but everyone else is listening as well. They’re able to give comments and ask questions.”

Patients remain completely anonymous throughout the process. Baylor St. Luke’s physicians are not provided their names or any other identifying information. They simply consult based on the medical details providers share with them.

“It isn’t like they give us information and we just say, ‘Do this,’” said Sussman. “We’re engaging in a conversation. After one or two cases, [Madu] was telling us what she wanted to do. She became so confident in managing this, and now she can teach others.”

With Rocks’ blessing, Madu presented his case during one of the clinic teleconferences. Based on the advice of Baylor St. Luke’s doctors, Madu put him on a 90-day regimen of an oral medication to treat hepatitis C. By the time 90 days were up, Rocks no longer showed any signs of hepatitis C.

He is the first patient with the Project ECHO to be cured, but if all goes according to plan, this is only the beginning. In addition to hepatitis C, Project ECHO also currently offers clinics in hepatitis B, advanced liver disease, infectious disease, and cardiology, with plans to expand further.

“In the summer and fall, we’re going to open up other clinics like nephrology, pulmonary, rheumatology,” said Escamilla. “We’re also working to
offer behavioral health services. We’re talking with many physicians who are generous with their time and would like to volunteer to lead a Project ECHO clinic.”

As the program looks to expand, Rocks’ experience has everyone at Project ECHO excited for the future. Though Rocks didn’t know it at the time, the moment that receptionist placed Wayne Gosbee’s phone number in his hand proved to be life-changing.

“One minute I thought I was dying, a year later I was cured of the disease,” he said. “It’s just a blessing. Amen for ECHO.”

The value of Project ECHO goes far beyond delivering care to underserved communities. It’s empowering providers in those communities, giving them the knowledge and the confidence to help the people they serve in ways they may not have believed possible. Madu grew teary-eyed as she spoke of the moment she told Rocks he was cured of hepatitis C.

“To tell someone with an infectious disease, ‘It’s cured, it’s gone. You don’t have the virus in your system,’ it makes you feel good inside,” she said. “And now he can think long-term again about his life.”