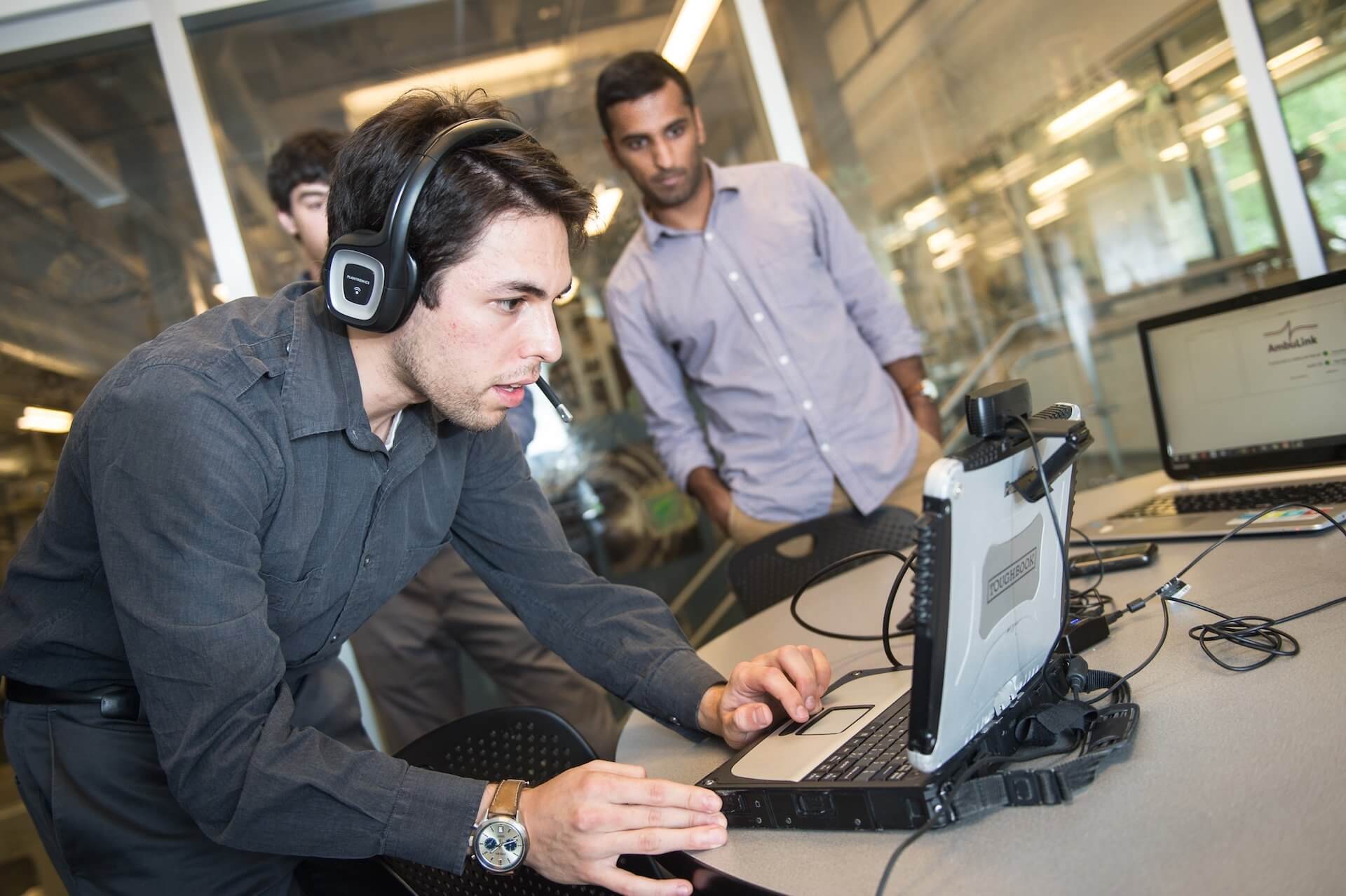 The AmbuLink team worked closely with Texas Children’s Hospital over the past year on a system that bridges gaps between cellular service signals and streams audio and, when necessary, video, from the ambulance to doctors and dispatchers.

The students, senior electrical engineering majors Adam Bloom, Christopher Buck, Supreeth Mannava and Chase Stewart, have assembled laptops, cellular modems, a camera and wireless headsets into a suite that allows emergency medical technicians to keep their hands free while communicating important information back to base.

“There are often times where the quality is poor and it’s difficult to make out what’s going on,” Kaziny said of communicating with ambulance crews. “Providers are in a hectic, stressful environment, trying to do 10 things at once in addition to relaying information to you. We were looking for a way to improve the quality of that call to relay vital information.”

The students’ primary challenge was to write, refine and test the software that allows all the pieces to work seamlessly and synchronize signals from three cellular providers. They see AmbuLink as a multiyear project that will ultimately feed data about a patient’s vital signs directly into a hospital’s health database, where doctors can access all the essentials before the patient arrives.

“If you’re in a hospital bed, you’re probably attached to a medical monitor that collects your heart rate information and information from whatever instruments are hooked up to you,” Bloom said. “That’s all getting logged and, without any intervention, ending up in your patient chart. If doctors need to make a medical decision, they can see your baseline and how things have been trending.”

Texas Children’s in-house ambulance service, known as the Kangaroo Crew, moves patients as necessary from hospitals across the globe 24 hours a day, seven days a week and performs more than 1,500 transports by ground or air every year. The transport team comprises an emergency medical technician, registered nurse and respiratory therapist. When the child is critically ill, the crew is joined by a neonatal nurse practitioner or an intensive-care physician. The crew keeps an electronic record of vital signs but the AmbuLink system should someday allow data to stream continuously from the ambulance while en route.

It’s the “continuously” part that has been the greatest challenge for the Kangaroo Crew. Because cell service can be spotty between cities, the Rice team aims to eliminate gaps in coverage by combining the signals of three providers.

“We were using a lot of cellphone and radio to communicate very vital information that needs to be acted on in a timely manner,” Choi said. “That was a problem we brought to the Rice engineering team.”

“What we’re shooting for is 100 percent up time,” said Andrew Peterman, a systems architect at Texas Children’s.

“One thing that differentiates this project is that the concept was brought to Rice by Texas Children’s,” Bloom said. He noted others have suggested systems with costly bells and whistles that hospitals don’t need. “Live streaming video from the ambulance would be nice, but doctors have told us they wouldn’t use it,” he said.

Instead, the Rice team incorporated a mounted camera that can be activated for 10 seconds at the press of a button. The video would be sent automatically to the hospital. Emergency medical technicians communicate with the hospital through a wireless, hands-free headset.

“We gained a lot by having conversations with doctors at Texas Children’s and a lot of folks over there in information services and the ambulance crew,” Mannava said. “We were plugged into the issues that they face on a daily basis. The advantage we have over other people who attempted to find a solution for this problem is that we had the backing of medical professionals who outlined what they actually need.”

“Enabling reliable connectivity is something we thought was a difficult problem to tackle and didn’t think was glamorous,” Peterman said. “But these guys just got it from day one, ran with it and knocked it out of the park.”