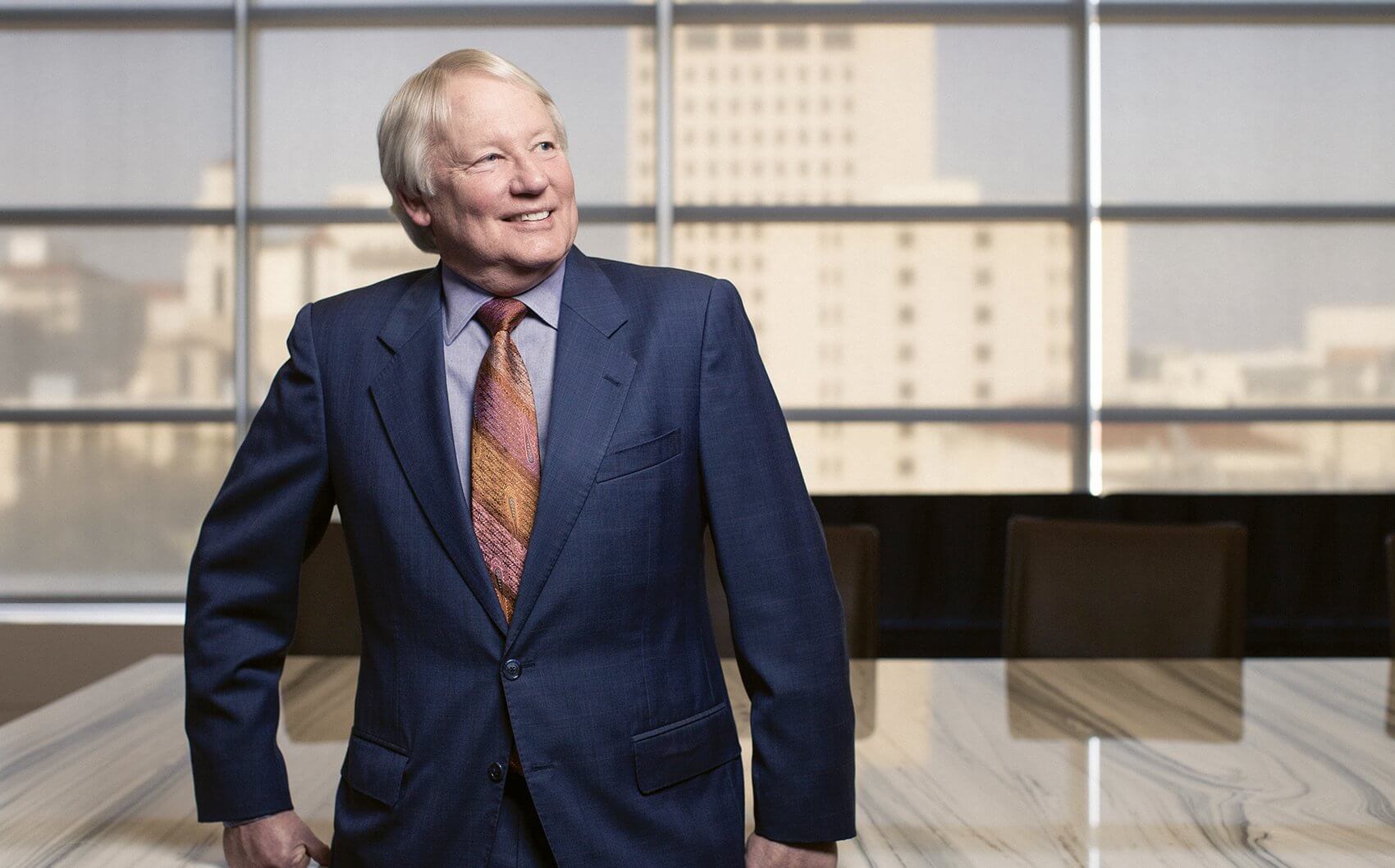 Wayne Roberts, chief executive officer of the Cancer Prevention & Research Institute of Texas, oversees a passionate and enthusiastic staff, dedicated to helping Texas’ researchers and public health specialists in the fight against cancer. He sat down with Texas Medical Center Executive Vice President and Chief Strategy and Operating Officer William F. McKeon to discuss CPRIT’s vision for the future.

Q | Let’s start at the very beginning. Can you tell us where you were born and raised?
A | I was born in Marion, Ohio, home to Warren G. Harding. Between my birth and arrival in Houston we lived in two places in Chicago, two places in Detroit, and Cincinnati. I viewed moving and new classrooms as par for the course.

I didn’t understand what was happening. My father was a copywriter in the ad business, and this was during the 1950s recession. He kept being last in, first out. Finally he got tired of it, and asked ‘Where is there no recession?’ Someone said, ‘Go to Texas,’ and so we came to Houston. He finished his career here and clearly made the right choice. We arrived as I entered the third grade.

We lived in Westbury and I remember that every other weekend we would go downtown to Foley’s. We’d drive up South Main and I’d look over to the right and see that first Baylor Medical building. I’ve enjoyed watching the medical center campus grow—I’m an old Houston boy.

Q | Where did you go to school?
A | Middle school was Johnston Junior High—the Greyhounds. Then Westbury. Back then we were the kicking boy for Bellaire High, probably still are. Westbury has undergone major demographic change from then. In 1969, when I graduated, we were considered fully integrated. We had one black teacher and one black student. Back then it was a solid college preparatory high school. I went from there to The University of Texas.

Q | I was going to ask you about that. Why The University of Texas? Obviously, it’s a great school…
A | I grew up following University of Houston sports and used UH as my backup. I thought about Rice, since I had some interest in the sciences. But I wanted somewhere away from Houston. I never considered A&M, because at the time, they didn’t admit women.

I had a hard enough time getting a date in high school, so why would I want to go there? Seriously. As I learned later in my career from admissions officers, kids choose colleges for many reasons, many not the reasons their parents might expect.

I was lucky for choosing UT, but it was largely happenstance. Looking back, I attribute what success I’ve had to UT.

I was intrigued with how people develop their entire political and social belief structures. What is it that determines how you vote and establish your political biases? I had an inspiring professor who, in my sophomore year, introduced us to political socialization and I ran with it. For a time, I thought I’d get a master’s and Ph.D. in political socialization. But it was not to be.

Q | When you look back on your professional career, what are some of your experiences that led to CPRIT?
A | Most of us know how we got to where we are today, but we never could have planned it from the outset. Looking back, my career is a logical progression but it took some unexpected turns. When I went to LBJ, I was interested in energy and environmental policy. Mind you, the oil embargo was affecting the economy and I’d had trouble getting a job, so why not energy policy? There would always be jobs in energy, or so I thought. After my master’s, I was torn between staying in Austin with a fiancée who didn’t want to relocate, or taking a job with the state energy office in Albany, New York. In Austin, the job being offered was state budget work, something I’d never considered. So two different career paths were available. I took the Austin job to make my fiancée happy, turned down New York and she promptly dumped me. That’s it. That’s how I started at the Legislative Budget Board, the budget-writing arm of the state legislature.

And it’s great! Although I’d never considered state budgeting as a career, I quickly saw it was a fortuitous place to start. In fact, the job I started at the age of 26—and this says a lot about my self-confidence at the time—would’ve been a job I’d have been happy to retire from. Back then, the LBB gave enormous responsibility and latitude to entry-level staff. We’d meet with the lieutenant governor and speaker, senators and representatives. Our recommendations mattered and we were encouraged to make them. Furthermore, I started lucky by budgeting for agencies of higher education. This was key. The contacts I made in the early 1980s, I still use today at CPRIT.

After 17 years, again, fate reappeared in the form of then Lieutenant Governor Bullock who tapped me for his staff. This began my period on the staffs of statewide elected officials. When Mr. Bullock retired, I was recruited as Deputy Budget Director for George W. Bush. When Governor Bush became president, I opted to stay with incoming Governor Perry. The skills and contacts that led to success in those offices were honed by budgeting.

When I speak to students, I always promote budgeting as a career. You can be interested in all the policy there is, but if you don’t have the budget there is no policy. Sooner or later all policy crosses the budgeteer’s desk. I think good CEOs everywhere—government, private sector, university—recognize this. This is why fiscal staff, along with lawyers, populate high levels of organizations. My connections acquired through budget work were deep and wide. I know people at all levels of state government in nearly every state agency and institution of higher education in Texas.

Success in the office of a statewide elected official depends upon one’s ability to solve problems, to make government run. You fix problems through connections and trust built up over time. The staff are the ones that allow politicians—the policy makers—to govern effectively.

I’d gone to work at the UTHealth Science Center here in the medical center when CPRIT hit its bump in the road in 2012. Friends in state leadership offices were looking for someone to bring in who knew the legislative process, knew what legislators needed, and who appreciated the bureaucratic processes that may have been skirted by CPRIT. I got fingered. So those contacts, those problem-solving skills, that ability to connect the dots in the Capitol, that’s how I got here.

Q | What excites you most about CPRIT?
A | Energetic innovation. The energy, the positive nature of the staff. It’s best understood by example. I had someone who was hesitant to apply at CPRIT because she’d lost a daughter to cancer and thought CPRIT would be a grim or depressing place to spend a day. It’s just the opposite. It’s hope. It’s a mission we’re going to accomplish. Our staff is small but passionate, perhaps due to the high number of cancer survivors on board, all who want to beat this thing. It’s also the interaction with our peer reviewers who are leaders in their fields. And it’s the enthusiasm of our researchers, public health specialists and our translational researchers in early-stage companies working to get an idea to the bedside. It’s an exciting, intellectually stimulating place with a heart.

Q | If you could wave a wand and have three things happen over the next five years, what would be really meaningful to you?
A | I would like several innovative advances to come out of our research programs. Whether that’s knowledge that advances understanding for a treatment, or knowledge to prevent cancer—doesn’t matter. I want at least three advances that Texans who put their trust in us can point to and say, ‘There it is.’ But I’m realistic enough to understand that scientific progress usually takes time and one advance builds upon another. I am confident—because we aren’t even half way through awarding the funds entrusted to us—that in the future, CPRIT will provide those advances. Will we completely cure cancer? Probably not. That’s the nature of cancer. It mutates. It’s ever changing.

Through product development, I’d like to stimulate the biotech life sciences industry in Texas. The innovations that you are doing here in the medical center—and you are certainly making them—will create the synergy to advance the biotech industry in Houston. I want our CPRIT awardees not only to be part of what is going on here, but also to make all of Texas the major player in life sciences in the nation. I not only want Texas to challenge the east and west coasts, I want Texas to surpass them. Big dreams for a big state.

The biotech life sciences are a frontier for the human spirit, just like the space program was in the ‘60s and ‘70s. What better place to do it than in Texas and through the wonderful institutions here in the Texas Medical Center. This is thrilling stuff.

With prevention, CPRIT has provided some two million services to Texans who might not otherwise have gotten cancer screenings or other preventive services. We have identified nearly 3,000 cancer precursors and detected nearly 1,400 cancers. We are giving people a chance, on a very personal level, to win their battle. Through our prevention programs CPRIT is saving lives now, and will continue to do so for our remaining years.

We have three legs to our stool: product development research, academic research and prevention. I expect big things from all three.

Q | Any closing thoughts?
A | I want to acknowledge Margaret Kripke, our chief scientific officer. She came to CPRIT in 2012 because she was angry that Texas might lose a golden opportunity with CPRIT. What a pillar of strength and human dynamo! Although I intended to be here only briefly in a fixer role, I remained because I wanted to see the original buzz and passion completely restored. And it is. The passion of our awardees, peer reviewers, the board and staff is infectious, and I caught it.

What overarches CPRIT is it’s so Texan. I mentioned NASA. Why was NASA put here? Because it’s Texan. It’s our frontier mentality. Texans reach out to do big things. And in CPRIT, Texas is reaching out in ways that the rest of the country and world only dream about. Mark my words, by the time CPRIT is done, Texas will have a cluster of expertise unparalleled anywhere in the world. From that expertise will be the victories Texans deserve. And many of those victories will be here in Houston, right where we’re sitting now