Students use smarts for damaged hearts

Students use smarts for damaged hearts 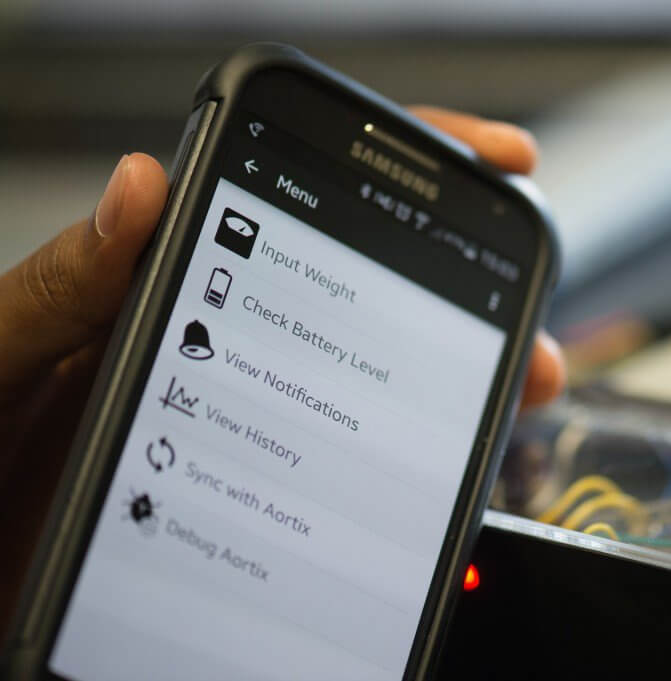 A smartphone app created by students at Rice University may someday serve as the ultimate remote to help control the flow of blood through human hearts.

The Flowtastic team of Rice senior engineering students created a combined software-hardware interface that works with an Android app to monitor and even control a high-tech pump that resides in the aorta and regulates the flow of blood.

The circulatory assist pump called Aortix was invented by Houston-based Procyrion, which is seeking approval from the Food and Drug Administration to use it as a minimally invasive solution for heart-failure patients.

“It’s for that in-between phase when medication might not be enough and you don’t want to go and get a super-invasive surgery where they have to cut your chest open,” said Rice bioengineering student Benjamin Lopez. “We don’t want you to get to that very severe state and there’s nothing really out there for you right now.” As many as 2.6 million patients could benefit from such a device, according to the company.

The students have been working at Rice’s Oshman Engineering Design Kitchen with a Procyrion prototype, a stent attached to a tiny but powerful pump that can be inserted into the patient’s aortic vessel to assure that blood keeps flowing at the proper rate to the heart.

The Rice team’s contribution gives doctors a way to monitor the device’s performance and make adjustments when necessary, reducing the heart’s workload and helping it heal.

“Our goal has been to make a holistic and integrated system that allows the patient to connect with the doctor and also connect with their device,” Bisberg said. The Rice team built hardware that plugs into the Procyrion controller and also communicates wirelessly with the Android app. They expect the company will combine the hardware components into a single unit that the patient will carry.

Bisberg said patients will be asked to enter their weight into the app every day. That information will automatically go to the doctor’s database. “Weight is a key factor in managing heart failure,” he said. “When the heart isn’t working well, the patient’s body tends to retain fluid.

“We want to be able to get a higher fluid-clearance rate from their bodies by accelerating blood flow to the kidneys and getting the liquid out of their systems.”

If a patient gains too much weight too quickly, the app would notify the doctor, according to team members. They expect the doctor will be able to adjust the pump as necessary either remotely or by plugging directly into the external electronics.

“A change in weight would trigger an email to tell the doctor what’s going on,” Chan said. “That way the doctor only has to look at that data when needed.”

“We spoke to a lot of cardiologists at the Texas Heart Institute and a lot of them said this technology’s great, but it would be really nice if they could only be notified when there’s really a need for them to go in and check,” Choi said.

The system should be a great help to people who can still lead an active lifestyle, he said. “They’re not sedentary,” Chan said. “They can go out and live their lives and we can hold back the progression of the disease and prevent bad things from happening.”

While the team members will leave their project behind when they graduate in May, they said what they’ve invented may be adapted to work with hardware that monitors glucose levels or pacemakers.