How Her Tissue & Organs Helped Over 50 People, Including an NFL Quarterback 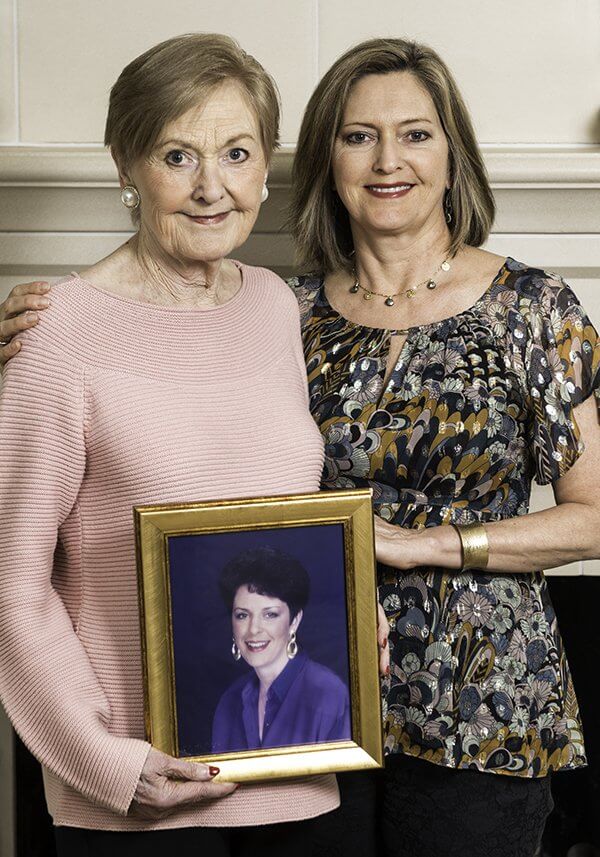 Julie De Rossi always looked out for other people and was always willing to lend a helping hand, according to her loved ones. After a successful day of securing high-profile venues for bands she managed, she was driving home with a smile on her face when, in the early morning hours of March 17, 2004, she was hit by a drunk driver.

The collision launched her car into a barrier and De Rossi was transported to Memorial Hermann-Texas Medical Center (TMC). Because De Rossi was listed as an organ donor, the hospital kept her in intensive care until her organs and tissues could be recovered. The staff contacted LifeGift, a federally regulated not-for-profit organ and tissue procurement company based in Houston, who approached the family about making the final decision.

“We felt like we fulfilled her wishes and were able to celebrate her life by agreeing to donate her organs,” said De Rossi’s sister, Karen Abercrombie.

Dorothy Hyde – De Rossi’s mother who, with her husband, Buddy, adopted Julie when she was just 2 days old – describes her daughter as an “outgoing, caring person who was always looking out for other people.”

Knowing De Rossi as they did, it wasn’t hard for her family to agree to have her organs and tissue donated to help others survive and lead better lives.

“She and I talked about it before, and she made it clear that it’s what she wanted to do,” said Hyde. “I believe when the spirit leaves the body, it shouldn’t just be thrown away when there are people there who need your organs.”

In all, De Rossi’s tissue and organs went on to help mend more than 50 people – including her Achilles tendon which was shipped to a tissue bank and used 22 months later to rebuild the knee of former Heisman Trophy winner and NFL quarterback Carson Palmer.

Palmer had just suffered an injury that tore his anterior cruciate (ACL) and medial collateral ligaments (MCL) and dislocated his kneecap. In most cases, surgeons can use the player’s own tissue to repair injuries, but Palmer suffered more serious damage and required donor tissue.

Unlike organs, which must be matched by blood type and antigens and transplanted immediately, tissue is universal, said J. Steve Bynon, Jr., M.D., FACS, chief of abdominal transplantation at Memorial Hermann-TMC and UTHealth Medical School. It can be recovered up to 24 hours after death, stored for years and reused regardless of age or sex.

“People don’t really think about tissue donation, but donor tissue from one donor can help up to 50 different people awaiting tissue,” said Dr. Bynon. He adds that tissue donation can include everything from long bone, to ground bone, to heart valves, even veins and arteries.

On Monday, Nov. 10, 2014, Palmer was injured again in a game against the St. Louis Rams and snapped the ACL that De Rossi’s tissue helped rebuild. “It was sad knowing that that part of Julie was gone,” Hyde said. “I checked the sports page every day to keep up with Carson and his career, and I was sad for him, too, because that injury put him out of commission for the rest of the season.”

But Palmer isn’t the only recipient with whom the family has established a connection. Abercrombie and Hyde recently shared dinner with a Vietnam War veteran who received De Rossi’s liver. “He contracted hepatitis C during the war and was going to die, and Julie’s liver saved his life,” said Abercrombie. “It’s wonderful to know that my sister is still helping people. She would feel really good about that.”

Together, Memorial Hermann-TMC and LifeGift offer hope to the more than 13,600 Texans awaiting lifesaving organ transplants. The institutions have a rich history of working together to save lives through organ and tissue donation. “We appreciate the partnership and look forward to saving more lives in the years to come,” said Kevin Myer, president and CEO of LifeGift. “Because of partners like Memorial Hermann, more than 75 people across the country receive a lifesaving gift every day.”

When a person dies in the U.S., the hospital is required by federal law to ask the family if it wants the organs, tissues or eyes donated. In Texas, signing up to be a donor on a driver’s license isn’t enough; the family must also consent. “I cannot stress this enough,” said Abercrombie. “You must discuss this with your family. Even if you have registered to be a donor, you need to let your family know about your decision. That way, should something happen to you, your family does not have to make a decision. They are merely carrying out your wishes.”

National Donate Life Month (NDLM) was instituted by Donate Life America and its partnering organizations in 2003. Celebrated in April each year, NDLM features an entire month of local, regional and national activities to help encourage Americans to register as organ, eye and tissue donors and to celebrate those that have saved lives through the gift of donation.