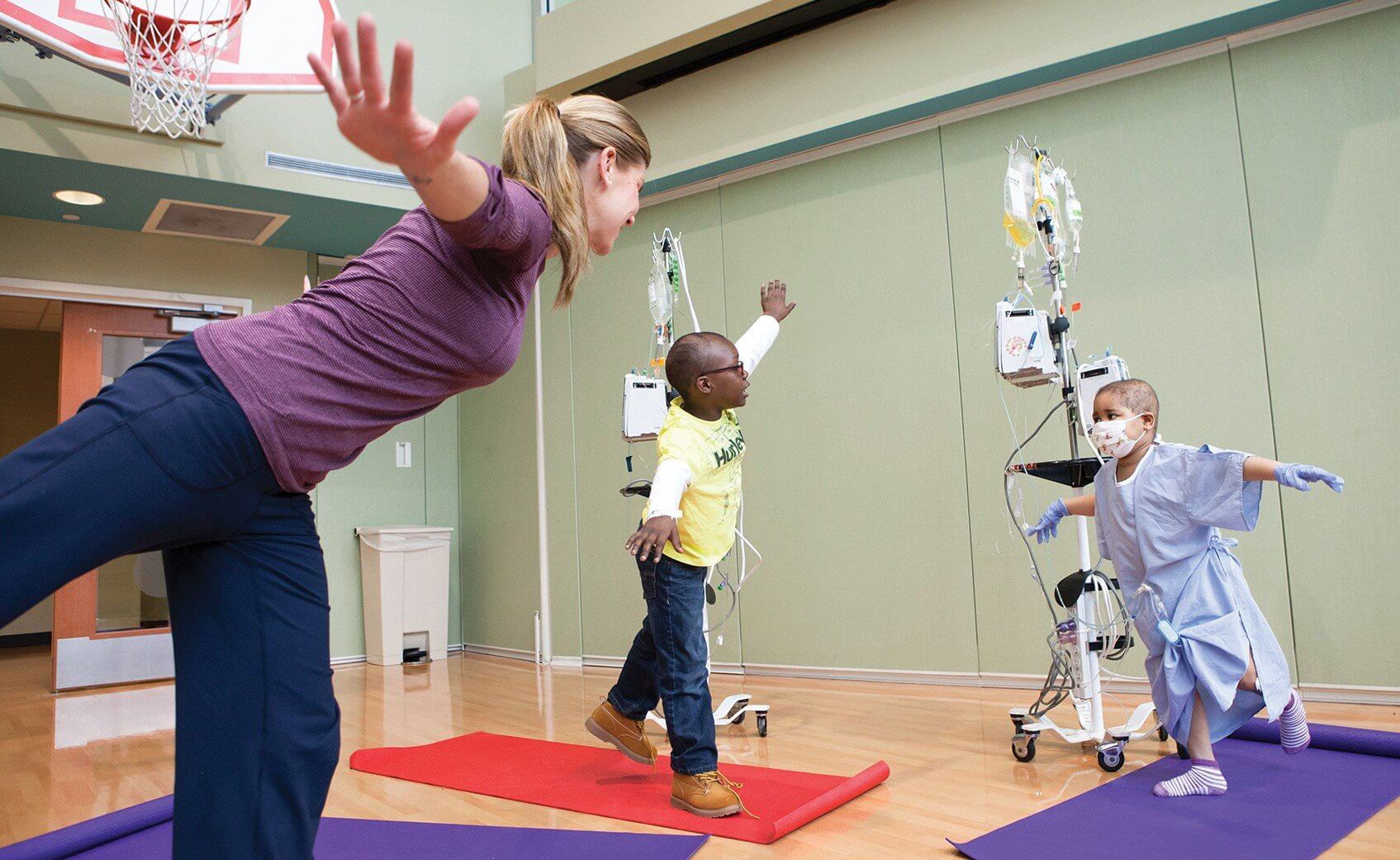 “Imagine you’re laying on the beach and it’s the most beautiful sunny day.”

It’s a cloudy, cool Tuesday at The University of Texas MD Anderson Children’s Cancer Hospital, but with their eyes tightly closed, the children in MD Anderson’s weekly Little Yogis class are relaxing on a tropical island.

“Hear the sound of the waves crashing,” says instructor Amie Koronczok, a mind-body intervention specialist at MD Anderson. “What do you want to do at the beach? Maybe build a sand castle?”

Beeping machines keep a steady beat, delivering medication to the young patients, but all thoughts of doctors and treatment fall away as Koronczok leads them through yoga poses, stories, visualization and deep breathing exercises and games.

Since late last summer, the Little Yogis class, part of MD Anderson’s Integrative Medicine Center, has given young patients and their families a break from the realities of intense medical treatment.

“It offers them a way to get out of the hospital, maybe not think about being in the hospital,” said Koronczok. “It gives them extra time to play and just be a kid.”

The class began at the request of parents, she added, who “were asking for something more integrative and holistic to help their children feel better.”

For Philandis Stovall and her kids Fre’derick “Ziggy,” 7, and Zai, 4, Little Yogis is a welcome respite from hospital life. Ziggy was diagnosed with acute lymphoblastic leukemia (ALL) in 2012. He began treatment at MD Anderson after being diagnosed with central nervous system relapse of ALL in January 2014.

“With the diagnosis and having to be at the hospital every week and sometimes more than once a week, it’s kind of like they still get a chance to have a life and enjoy different activities,” said Stovall. “They always look forward to it.”

Ziggy’s younger sister, Zai, joins him in the Little Yogis classes, creating a bonding opportunity for the siblings. Zai is a ball of activity, full of a bright energy Stovall says helps Ziggy stay positive.

“When he was first diagnosed, he didn’t want to get up out of the bed. As a parent you see your child—they have this look like they want to give up,” Stovall recalled. “But when he saw his sister, he immediately wanted to get up and start moving. It’s kind of like a daily motivation and encouragement, like, ‘Hey, I can still be a kid.’ These classes help them play together and share.”

The idea of involving multiple family members has been a goal of the Little Yogis class since the beginning. Koronczok said she encourages parents to participate with their children. Often when a child is sick, a parent can fall into the role of caretaker, dispensing medicine and coordinating with the child’s health care team. Taking a class together helps restore the parent-child dynamic rather than that of caretaker and patient, she said.

Little Yogis has benefits for parents even when they aren’t directly participating in the class by giving them the time to meet other parents who can relate to the stresses of having a child in treatment. At a recent class, Stovall and another mother chatted and shared advice while watching their children enjoy the activities led by Koronczok.

Class size can fluctuate—some weeks eight or 10 kids will be present. Other times only one shows up. No matter how many appear, Koronczok leads them through a series of activities to help the kids relax and leave with smiles on their faces, ready to face their next challenges.

“I usually start with the breathing ball because that gets their attention,” she said. The breathing ball exercise involves taking a deep breath while opening a rainbow-colored expandable ball, then breathing out while closing it.

“I think that’s the most important thing, to teach them the breathing, so we do it first,” she explained. “Then just judging by who is in the classroom and whether they are paying attention, I might do some songs and incorporate yoga poses into the songs. I like to do at least one story and I try to pick stories that have animals, so we can mimic the animals.”

In addition to Little Yogis, MD Anderson has offered yoga classes geared towards adults for years. This reflects an overall growth in yoga practice over the past decade. A recent study found over 20.4 million adults in the United States practice yoga, a 29 percent increase over the results of a 2008 study.

“Yoga allows patients to switch the autonomic nervous system from the sympathetic (i.e., the fight or flight response) to the parasympathetic (i.e., the relaxation response) nervous system,” she said. “Along with many other benefits, yoga may improve sleep, increase energy, help manage stress, and improve overall well-being. Oncology patients who are undergoing conventional medical treatments may have less treatment side effects and feel a greater sense of control over their bodies.”

“Some of these kids, they’re afraid to move because they’ve been hospitalized, they’ve been in pain,” she said. “I think yoga builds confidence because you’re doing things that you normally don’t think you can do.”

Koronczok said she hopes to provide her little yogis with calming techniques and activities they can continue to employ after treatment and into adulthood.

“What I’m excited about is that the kids really enjoy the relaxation part. I’m hoping that they will take that with them as they grow older—that it’s really important to have a mindful relaxation portion in their lives,” she said. “I try to incorporate deep breathing with them every time they come in so they can learn that will make them feel calmer.”

Given the stressful and sometimes frightening nature of treatment, those moments of calm are precious. During a recent Little Yogis class, a sense of peace radiated from Ziggy. Despite the noise and distractions of a busy hospital and a rambunctious little sister, he laid quiet and still on his colorful mat, eyes closed, face relaxed, mind and body at ease.