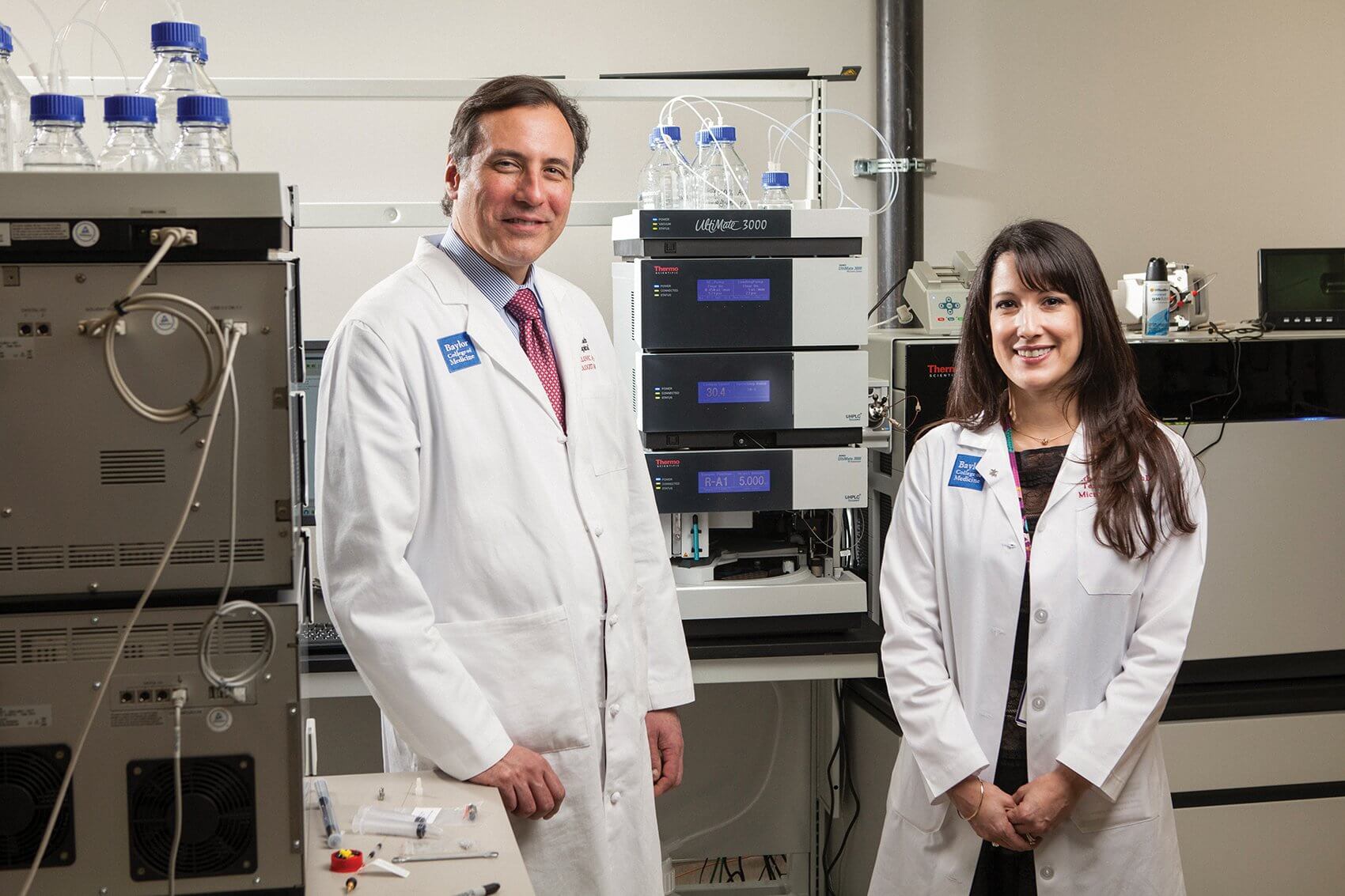 Bacteria have long been regarded as the enemy—blamed for disease and infections, even anthropomorphized as tiny green monsters in literature and on television. But James Versalovic, M.D., Ph.D., the Milton J. Finegold Professor of Pathology at Baylor College of Medicine, pathologist-in-chief at Texas Children’s Hospital and director of the Texas Children’s Microbiome Center, and Ruth Ann Luna, Ph.D., an assistant professor of pathology at Baylor and director of medical metagenomics within the Texas Children’s Microbiome Center, are working together to change that perception.

“For many years we would just think of human cells while ignoring our microbial partners or pointing the finger to them as the bad guys causing infectious diseases. But the reality is, it’s just like humanity—we have a few bad actors, but most people are good-natured at heart. Most microbes are friendly with their habitats and hosts; they’re beneficial,” Versalovic explained. “In fact, we have more microbial cells in the human body than our own—100 trillion microbial cells versus 10 trillion human cells. We know that we have co-evolved with our microbial partners, and our challenge now in medicine is to facilitate that partnership and enable bacteria to work for us in a way that maximizes human health.”

So, could bacteria turn out to be the hero of modern medicine? Versalovic and Luna think so. Together with their teams at Baylor and Texas Children’s Hospital, the two researchers recently received a $1.4 million three-year grant from the organization Autism Speaks to study potential connections between gastrointestinal problems and autism, focusing specifically on the profile of bacteria in the gut.

“Research has shown that there are inherent differences in the guts of children with autism than those without, such as differences in the type and amount of bacteria in their guts, changes in the tissues of their GI tract, and cases of chronic diarrhea or constipation,” Luna explained. “These gastrointestinal problems often worsen behavioral symptoms, and many children with autism are unable to communicate pain or what they’re feeling.”

It’s a connection Luna knows well. She is the mother of a child with autism who has limited verbal abilities and also suffers from significant GI problems.

“Before I noticed the behavioral issues, I was already acutely aware of the GI problems,” Luna said. “Through trial and error, I began making some changes to his diet, which turned out to be very significant and explained a lot of the behavioral challenges. We’re hoping this study will help shed a light on connections like this so that we can tailor treatment options to kids depending on their bacterial chemistry. Ideally we can help treat their GI problems and in doing so, alleviate some behavioral issues that may be directly related.”

Luna is quick to note that despite there only being one clinical classification for autism, it is truly a spectrum disorder with varying degrees of severity. As such, treatment options for GI issues must be tailored depending on the child’s clinical and behavioral symptoms as well as their bacterial profile.

“There is no such thing as one autism,” said Luna. “There are several autisms and they are all different, so treatment is going to be different, too. A one-size-fits-all approach is not going to work.”

The first-of-its kind study will compare wide-ranging data related to gut bacteria, GI symptoms and behavioral issues to look for potential connections. It will analyze individual microbiomes—all of the bacteria and microorganisms present in the gut specimen—as well as the small biological molecules that can be isolated from that specimen, known as the metabolome, and use that data to evaluate metabolic disturbances in children with autism, identify any biomarkers of abdominal pain, and gain further under- standing of the gut-brain-microbiome axis.

The gut-brain-microbiome axis refers to the biochemical signaling that occurs between the gastrointestinal tract and the nervous system. Luna and Versalovic are working to identify the specific impact of the microbiome on the brain and how harnessing bacteria in the gut could not only alleviate GI symptoms but potentially influence brain chemistry as well.

Luna added that because of the intrinsic interconnectivity between the enteric nervous system and the central nervous system, shifting the balance of one would have an impact on the other.

“We think that by restoring gut health, we can perhaps repair some of the brain functions that may be damaged. The pathway goes in both directions. Certain bacteria are known to impact neurotransmitters, so it stands to reason that the right community can cause the brain to function more effectively, while the wrong community could definitely tax the system by causing too much inflammation or by blocking pathways that provide energy to fuel neurons. We’re not saying we’re going to cure autism, but we may be able to reduce behavioral symptoms as we’re treating these gastrointestinal imbalances.”

Ultimately, Versalovic and Luna hope that studies like this will not only help researchers gain a more complete understanding of how the gut and the brain are connected, but also bolster new therapies based on microbiome science.

If successful, these therapies could have applications far beyond their initial objectives.

“In the future we could be using information about the microbiome to help maximize brain development in infancy and early childhood, or maybe even influence human behavior in a positive way,” said Versalovic. “This research project will enable us to establish a foundation so that we can continue to pursue these connections between the microbiome and the brain.”

The study is currently enrolling at three different sites including Baylor College of Medicine/ Texas Children’s Hospital, The University of Texas Southwestern Medical Center in Dallas, and Nationwide Children’s Hospital in Columbus, Ohio. It involves a commitment of about two weeks, a stool specimen collected at home for testing, and a series of surveys and diaries to be completed by the parents. For more information or to enroll in the study, please contact Dr. Luna at raluna@bcm.edu.