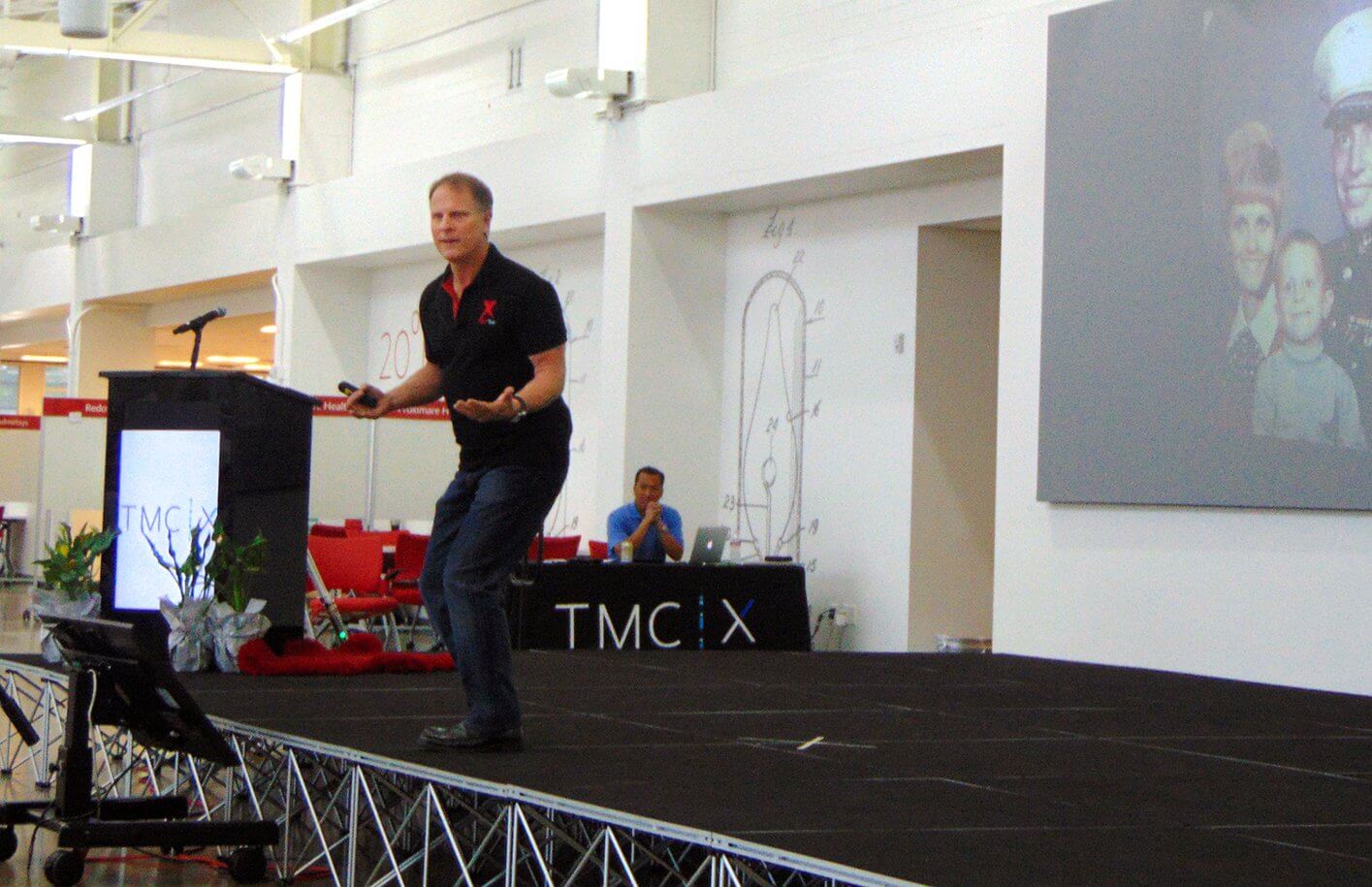 Crouched atop the stage at TMCx, his hands positioned in front of him in a warrior’s stance—firmly clasping a plastic lightsaber—a familiar electronic buzz reverberates throughout the room as John Bates, chief executive officer of Executive Speaking Success & Business Coaching, sends a stream of green light across the toy sword.

“This is an elegant weapon for a more civilized time,” he says sagely while fencing with an imaginary opponent, an image of Yoda projected against the dual screens behind him. Showcasing the power of audience involvement, he hands a second saber to Kristin Weikel, marketing and events leader for Johnson & Johnson Innovation, LLC, before sparring with her, eliciting cheers and applause from the audience. “The force is strong with you,” Bates observes, laughing. “If you practice, and use the force, you could change the destiny of the galaxy!”

Bates’ demonstration—a testament to the ability to generate audience engagement by “making the audience the hero of your talk”—was just one of the insights he imparted on Wednesday, April 22, at a presentation entitled, “Excited About Your Story: Tell it like a TED Pro.” Hosted by JLABS, a network of incubators for emerging life science companies and part of Johnson & Johnson Innovation, LLC, and held at TMCx, the accelerator program located within the Texas Medical Center Innovation Institute, the session aimed to provide attendees with the ability to harness their innate storytelling potential.

“If you really want to connect with people, make the audience the hero of your talk,” Bates advised after his “Star Wars” inspired demonstration. “When you bring them into your presentation, they’re going to like it more and it’s going to resonate with them in a deeper way—you’re going to give them a world to live into and inhabit.”

Bates, a world-renowned expert in leadership and communication who has worked with many early stage companies as both a founder and early employee, relayed his experiences and distilled his personal teachings on storytelling to an audience of life science industry executives, founders and entrepreneurs, as well as marketing managers of startups and other private companies. He has been asked to speak and teach all over the world, including many appearances at TEDx. Most recently, he taught groups of entrepreneurs and business owners in Bratislava, Slovakia, via the University of Ekonomics, American Chamber of Commerce and the American Embassy.

“Ever since human beings have started talking, how did we share really information with each other before the printing press?” Bates asked the crowd at one point. “Orally, absolutely, but the real distinction is that information was conveyed through stories, so it makes sense that our brains would come to value stories more highly. Anecdotal evidence matters more to us, biologically, than all the statistics in the world.

“If you’re not using anecdotal evidence when you’re speaking with human beings, then you’re forgetting the most important tool that Mother Nature gave you to communicate an important point,” he added. “That’s the power of a story, and you want to be aware of the fact that it works on you because you’re a human being—it also works on every other human being on this planet, from venture capitalists to scientists and engineers.”

Distilling a lifetime’s worth of maxims into a dense, 90-minute session, Bates advised the audience to have the courage to share their failures, follow the VAKO—visual, auditory, kinesthetic, olfactory—principle of storytelling, differentiate themselves from the crowd and, above all else, never make a point without telling a story and never tell a story without a point. And, if all else falls, you can always start in the middle.