Debilitating Mosquito-borne Virus May be Heading to Houston: What You Need to Know

Debilitating Mosquito-borne Virus May be Heading to Houston: What You Need to Know 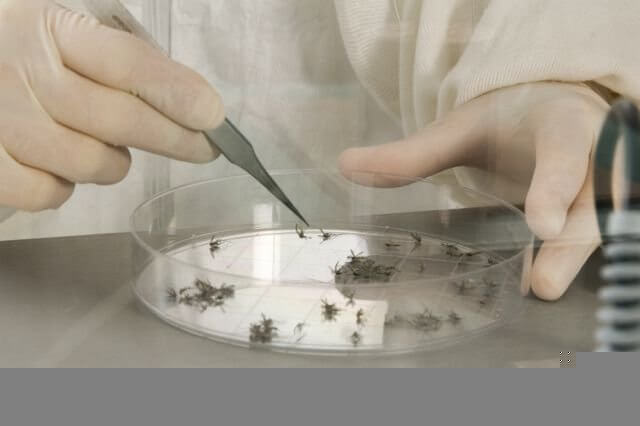 They are the unwelcome guests at our picnics and crawfish boils, the reason we go to bed smelling like Deep-Woods scented DEET, and the bane of most Houstonians’ outdoor summer fun. This year, they may also be carrying chikungunya.

Pronounced “chik-en-gun-ye,” the vector-borne virus spreads quickly via the Aedes aegypti and Aedes albopictus mosquito species, both of which thrive in the Houston climate. Clinically similar to dengue, symptoms of infection include fever and joint pain as well as headaches, muscle pain, joint swelling, and in some cases, the presence of a rash. It does not often result in death but is painful and debilitating and can persist for years. There are no vaccines to prevent the disease and no specific therapies to treat infected individuals, although symptoms may be managed through anti-inflammatory drugs, liquids, and plenty of rest.

Outbreaks of the virus have run rampant for decades in certain regions of Africa, Asia, Europe and the Indian and Pacific Oceans, and beginning in late 2013, local transmission cases spread throughout the Caribbean and Latin America, with over 1.3 million estimated cases reported in the region to date.

Houston has already seen the virus in travellers coming back from the Caribbean. All it would take is one of these infected individuals to be bitten by a local mosquito during their first week of illness for chikungunya to spread.

“Typically when someone becomes infected by a mosquito bite, there’s an incubation period of one to three or four days where there are no symptoms, so people don’t know that they’re already infected. They travel back to their home without knowing that, and then when they become symptomatic, that’s when the risk of initiating a transmission cycle occurs,” explained Scott Weaver, M.S., Ph.D., director of The University of Texas Medical Branch at Galveston’s (UTMB) Institute for Human Infections and Immunity, as well as the scientific director of the Galveston National Laboratory and one of the lead members of the Global Virus Network’s Chikungunya Task Force.

While there are yet to be any known locally acquired cases in Texas, 11 were reported in Florida last year–all initiated by infected travellers.

“I think this year our risk in Texas is going to be higher,” said Weaver. “We have a lot of business and family connections with many parts of Latin America, so there are going to be a lot of travelers bringing the virus back, and Houston is a major hub for air travel to the region. The other factor that I think is going to increase our risk even more dramatically is that probably by sometime this summer, the virus will spread northward through Mexico along the Gulf Coast to northern parts of the country, places like Matamoros and Juarez. If there are large outbreaks in those cities–and there is no reason to believe there will not be–I think we’re going to see a lot more imported cases from the millions of persons crossing the border via land.”

To make matters worse, the U.S., like most parts of the world, is not prepared to diagnose chikungunya in a rapid or efficient manner–currently the turnaround time is approximately two weeks. This delayed detection poses a major threat to transmission control.

“The problem is, if you have a potential imported case and you don’t diagnose it within a few days,” said Weaver, “you’ve lost the opportunity to try to control its spread by going to the home of that person and doing control of mosquitos as well as educating that person on how to protect themselves from mosquito bites.”

Weaver noted that despite the challenges in diagnostics and the growing likelihood of local transmission here in Houston, a full-blown epidemic is unlikely.

“Even though we see a lot of Aedes aegypti in the area, which is the main vector for this strain of chikungunya, I don’t foresee major outbreaks in Houston or in most parts of the U.S. like we’ve seen in the Caribbean and are now seeing in Mexico, Colombia and other parts of Latin America, and that’s mainly just because our culture doesn’t expose us to mosquitos as much. We have air conditioning in our homes, or at least screened windows and doors, so we don’t get the same number of mosquito bites as in most parts of Latin America where air conditioning is not affordable for many people and screens are not used as much.”

So what’s the moral of the story? Avoid mosquito bites: use insect repellent, wear protective clothing, secure screens on your home and empty standing water found in flowerpots, buckets or trash. And there’s more: it turns out the Aedes aegypti mosquitos are a completely different breed–both literally and figuratively–than those that carry West Nile, an important distinction when it comes to managing exposure.

“People need to recognize that mosquitos are not all alike, and what they’ve learned about West Nile prevention is not going to protect them from chikungunya,” Weaver said. “The Aedes aegypti has evolved to live in very close association with people and unlike the breed that carries West Nile, they usually bite during the daytime and they like to go into your home and stay there.”

Weaver and his team at UTMB are currently developing anti-viral drug candidates to treat the virus and have also designed a live-attenuated vaccine candidate, licensed and being developed jointly with Takeda Pharmaceuticals, in the late stages of animal testing. Still, Weaver believes it will be a few years before any product for chikungunya would become licensed and available for clinical use.

“It’s a long slow process to develop new drugs and vaccines in the U.S. and it requires major financial investments, usually on the order of hundreds of millions of dollars. That’s one of the problems with chikungunya and it’s actually similar in some ways to what we faced with Ebola–until last summer with Ebola, we’d only experienced small sporadic outbreaks in Africa, a few hundred people at a time, so there was no commercial interest in a vaccine because there wasn’t a large enough market,” said Weaver. “The one good development that’s come out of this Ebola outbreak is that the conversation has changed dramatically between government funding and regulatory agencies, Big Pharma companies and scientists. We have to think of new ways to get these products developed and to the market that don’t rely on traditional funding mechanisms and in some cases, traditional regulatory approval processes. I think there’s reason for some optimism that we may be able to do better in the future.”