At RodeoHouston, Texas Medical Center members are in the middle of the action, from patching up cowboys to giving young patients the thrill of a lifetime 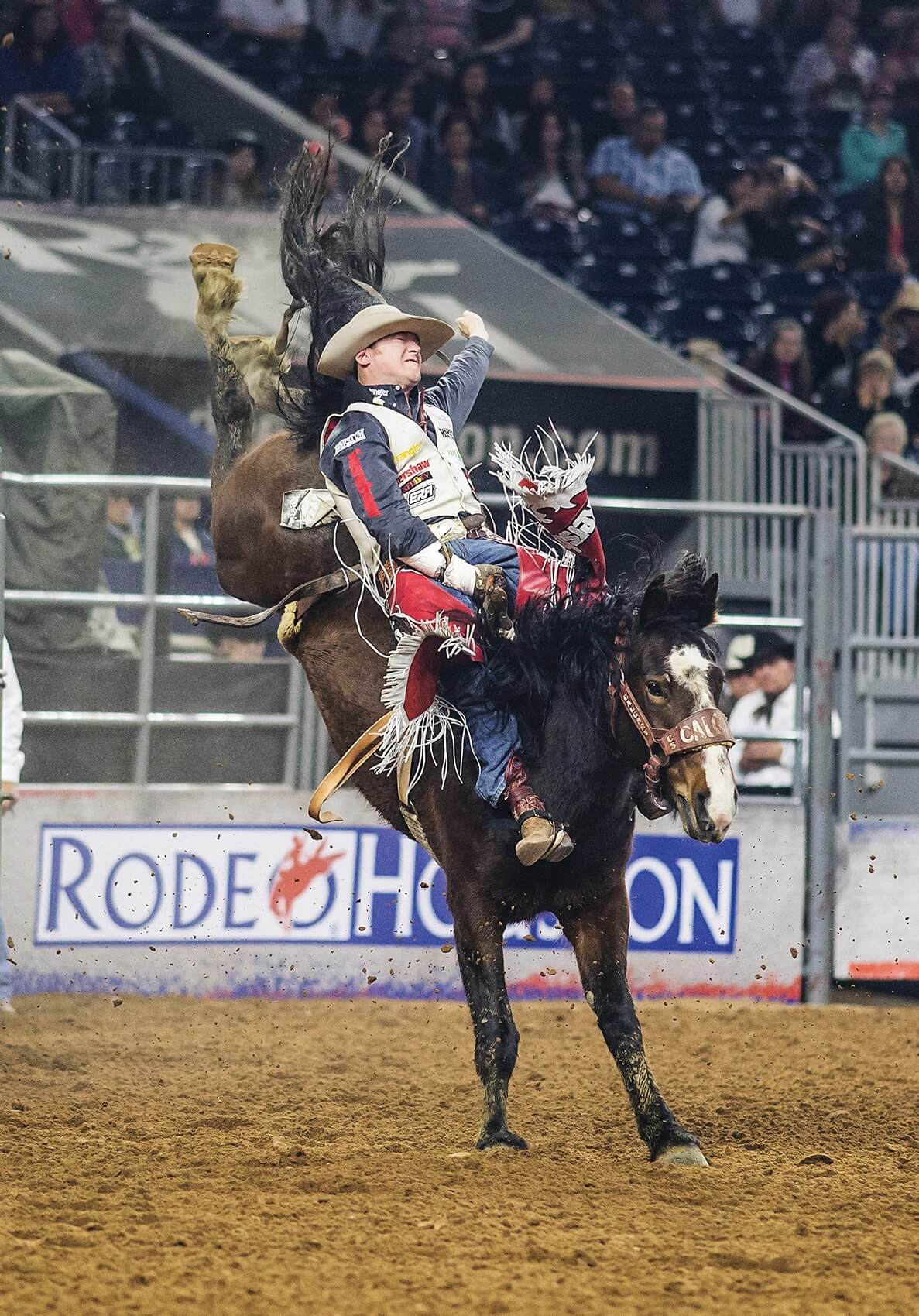 Each evening, the Houston Livestock Show and Rodeo pits man vs. beast, as cowboys and cowgirls urge their horses ever faster around barrels, rope steers, and try to stay astride bucking bulls that outweigh them tenfold. Meanwhile, behind the scenes, a team of volunteer physicians, chiropractors, athletic trainers and physical therapists organized by official health care provider Houston Methodist stands ready.

“Just because you manage to stay on the bull for eight seconds doesn’t mean you didn’t get some bumps and bruises along the way,” said Patrick McCulloch, M.D., an orthopedic surgeon at Houston Methodist who has worked the rodeo for five years. “There are acute injuries that can happen during the rodeo events—we’ve seen fractured bones and dislocated joints, some pulled muscles. Often these are from a fall off a horse or off a bull. Sometimes they occur when a rider gets pinned between an animal and the railing or gate.”

If athletes are injured, they have access to some of the best medical care they will see on the rodeo circuit. Houston Methodist organizes two centers: a medical center for anyone who is feeling sick with a cold or the flu, and an orthopedic center, equipped to provide stitches, on-site X-rays, and the kind of treatment offered in any high-level athletic training facility.

“I take care of the Houston Astros and Rice University, the Houston Ballet and NASA astronauts,” said McCulloch. “When these people agree to come to Houston to help make the Houston rodeo experience so exciting for everyone, we want to provide them with the same level of care we would provide our own Houston team athletes.”

Starting a little over an hour before the rodeo events kick off each evening, the clinic buzzes with activity. Athletes file in for chiropractic adjustments or to get knees, ankles and shoulders taped. They consult physicians regarding previous injuries and get stretched and warmed up. Then it’s out to the arena to perform for thousands of roaring fans. A medical team stands on the sidelines throughout the night, always prepared to spring to action. “Should someone get hurt in the arena, they will usually get up and run towards the side because, of course, at that point there may be a loose bull in the ring, and then we’ll escort them back to the facilities,” said McCulloch.

The volunteer medical workers marveled over the fact that they do not see many serious injuries at RodeoHouston, a testament to the caliber of talent. The athletes compete in Houston by invitation only. Being some of the top competitors in the country means they know how to stay on the horse or the bull—and when to get off.

“The guys are so highly skilled,” said Timothy Sitter, M.D., a Houston Methodist orthopedic surgeon and lead orthopedic surgeon on the RodeoHouston sports medicine team who has volunteered at RodeoHouston for 20 years. “If they’re getting into trouble, they’ll bail out. They’re not going to sit there and get their arm ripped out of the socket and ruin their entire career over one eight second ride.”

Still, the possibility of an emergency remains a primary concern throughout the three weeks of competition.

“There’s always an opportunity for mass trauma,” said Jace Duke, manager of athletic training for Houston Methodist and vice chairman of the RodeoHouston Sports Medicine Committee. “You’ve got two athletes competing against each other and one of them outweighs the other by a couple thousand pounds. We’ve been relatively lucky here not to have anything too bad, but we’re always on the edge of our seats.”

For rodeo athletes, some of whom spend months on the road, staying healthy is essential. Other professional athletes—football, baseball, soccer players—are under contract and still get paid sitting injured on the sidelines. In rodeo, not competing means no paycheck.

“They are young, tough, hard-as-nails kids, but they are the most polite people you’ll ever meet. They’re always very, very thankful for just anything we can do for them.” — TIMOTHY SITTER, M.D., Orthopedic Surgeon at Houston Methodist, Lead Orthopedic Surgeon for the RodeoHouston Sports Medicine Team

“These guys will ride with broken bones—they will come to you and say, ‘Look, put a cast on my arm, I’ll ride with a broken wrist’ or ‘Can you brace up my knee enough to go out there?’” said Sitter. “There does come a point—and it happens occasionally during the rodeo—that a guy gets hurt bad enough for us to basically say, ‘Look, you can’t go in.’”

“Having a comprehensive medical team at a rodeo like we have here in Houston enables the rodeo athlete to speak with a variety of medical professionals and make the best decision regarding their health,” said Duke. “It is our goal for them to leave Houston healthier than when they arrived.”

“I love it. It’s saved my life a thousand times,” he said. “I’ve had a lot of injuries in the past and they’re always here to help us get ready to get on and get our muscles warmed up and when we’re done, they’re here to ice or pop joints back in.”

For the volunteers like Sitter, McCulloch and Duke, helping the rodeo athletes is a pleasure that brings them back to NRG Stadium year after year. The rodeo sports medicine team spoke highly of the athletes, commending their positive attitudes and perseverance.

“They are young, tough, hard-as-nails kids, but they are the most polite people you’ll ever meet,” said Sitter. “They’re always very, very thankful for just anything we can do for them.”

Though the professional rodeo stars are certainly one of the biggest draws of RodeoHouston, not far from the stadium where those athletes compete for a nearly $2 million purse, a smaller crowd gathers each year for a gentler rodeo.

Over the past 27 years, the Lil’ Rustlers Rodeo, held by RodeoHouston’s Special Children’s Committee, has given hundreds of children with special needs the chance to feel like a real cowboy or cowgirl.

“The meaning of our entire committee and the events that we hold is to allow children to have a rodeo experience who would not otherwise get to have that opportunity,” said Amie Dean, vice chairman of the Lil’ Rustlers Rodeo. “We contact different programs in the surrounding areas that children are involved in so we can see what their needs are for Rodeo and how many participants they think they will have.”

The participants check in at NRG Center, where a small band plays lively tunes and rodeo clowns weave through the crowd, drawing giggles from mini cowboys and girls. After donning special shirts and hats, as well as a rodeo number to wear in the arena, each child is paired with a volunteer.

“The volunteers take participants around to the different events in the arena,” said Dean. “Once they’ve done as much as they want to do in the time we have, they can leave and get a trophy, a belt buckle and a gift bag.”

This year, several children from Texas Children’s Cancer Center participated in the Lil’ Rustlers Rodeo, including eight-year-old Avaya, a long-term cancer survivor at Texas Children’s. Avaya underwent surgery and chemotherapy in 2010 for a malignant tumor over her heart.

These days, Avaya is doing “awesome,” said mom Kelley Holloway. And when her family heard about the opportunity to participate in the Lil’ Rustlers Rodeo, they knew it was the perfect activity for the outgoing little girl.

“She absolutely loves the rodeo and anything that has to do with getting dressed up western, getting to ride on horses,” said Holloway. “Whenever the rodeo comes around it’s our favorite time of year, and we’re really excited to be a part of it in this way.”

With eyes shining and a big grin on her face, Avaya’s joy was unmistakable. As she and her volunteer cowboy progressed through the different events—“bull riding” on a seesaw made of hay bales, riding a real horse, petting baby animals—a rodeo announcer called out her name over the loudspeakers and she appeared on the giant video screen, just like a real cowgirl.

“I think it’s really cool that people are able to do this for the kids so they can experience something that maybe not everyone gets to experience,” said Holloway.

Caleb is also a cancer survivor who was treated at Texas Children’s. Diagnosed with hepatoblastoma, a form of liver cancer, at only 16 months old, he received a liver transplant at the tender age of 18 months. Today, he is cancer free.

At three years old, Caleb could easily have been overwhelmed by the amount of activity during the Lil’ Rustlers Rodeo, but the serious little boy took it all in stride. He progressed through the events with his volunteer cowboy and his mother by his side, documenting it all with her cell phone camera.

Like Espinoza, many of the parents get as much joy out of Lil’ Rustlers as their children, which Dean loves to see.

“The expressions on the parents’ faces might be one of my favorite things, because they’re getting to watch their children experience something that they don’t get to do on a regular basis,” she said. “It makes all of the work so worth it. I wouldn’t even call it work. It’s just fun because you know that the end result is 100 times more than what you could imagine.”